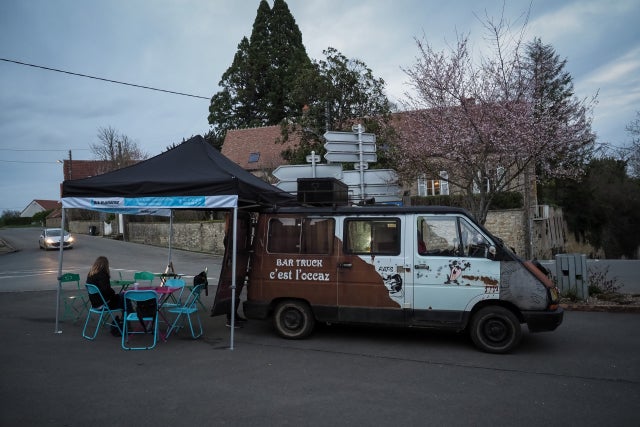 This picture taken on March 8, 2019 shows the concept bar truck of Sebastien Cherrier, former caseworker turned second-hand goods dealer then bartender, on the village square in Villequiers, near Bourges, central France. The bar truck makes it possible to re-create social links in the villages where the bars and the shops have disappeared. Image: AFP/Guillaume Souvant

‘Bar truck’ brings a bit of life back to French villages

The traditional French cafe where people of all stripes have customarily met is becoming a rare sight in many villages, but a man with a van — and a liquor license — is making the rounds to help revive rural socializing.

On a brisk recent Friday, Sebastien Cherrier, a 44-year-old former educational caseworker, was serving drinks and bonhomie from the back of his “Bar Truck” in Villequiers, population 483.

More than a dozen patrons were gathered under the pop-up gazebo installed behind the van’s open back doors, where Cherrier sat behind a customized oak counter donated by a woodworker.

“The last cafe here closed a little over a year ago, but as recently as 1985 we still had four,” said Villequiers mayor Pascal Mereau, who is also a teacher in the village.

“All we have left is one business that’s a grocer, bar, and guest room,” he said.

Mereau and other residents see Cherrier’s initiative as a chance to reknit a civil fabric that’s fraying as more people leave for bigger cities, prompting businesses to close and public services to dwindle.

The trend has contributed to a growing rift between Paris and other prosperous urban or tourist centers on the one side and those in the picturesque yet increasingly isolated countryside on the other.

The issue has received close scrutiny in recent months during a revolt by “yellow vest” demonstrators in rural and small-town France who have blocked roads nationwide in a protest against President Emmanuel Macron.

France had some 200,000 cafes in 1960, often serving as the social centre of gravity for communities and neighborhoods around the country.

By 2015, that number had fallen to just 36,000, with most closures in rural areas, according to a 2017 report from the France Boissons industry body and the CREDOC consumer studies agency.

“Before, cafes allowed you to meet people. I had to come to the Bar Truck to really get to know my neighbours,” said Oliver, a craftsman in his 50s in Villequiers.

“Until now it was just ‘good morning’ or ‘good night,'” he said.

With his shaved head, tattoos and imposing beard, Cherrier began holding court several weeks ago from a modified Renault van dubbed “C’est l’Occaz”, or “Now’s the Time”, painted on the side.

His Facebook page lets people know where he’ll be in the central Cher department: Monday in Precy (population 350), Tuesday in Azy, Wednesday in Rians.

“The idea had been bouncing around in my head for a while,” said Cherrier, who has also been working as an itinerant antiques dealer.

“I go through a lot of villages around the Sancerre region (in central France), and I was appalled at the number of businesses that have closed, especially the bistros,” he said.

“Now it’s all over, they have all closed. People are stuck in front of their TVs, their tablets and their phones. There are no more personal exchanges — it’s disastrous.”

Cherrier wasn’t surprised by the “yellow vest” protests which have led to violent clashes in Paris and other cities and widespread disruption since they erupted in mid-November.

“You can’t be surprised that things are going badly. We don’t have any more places to go and talk after a day of work,” he said. CC