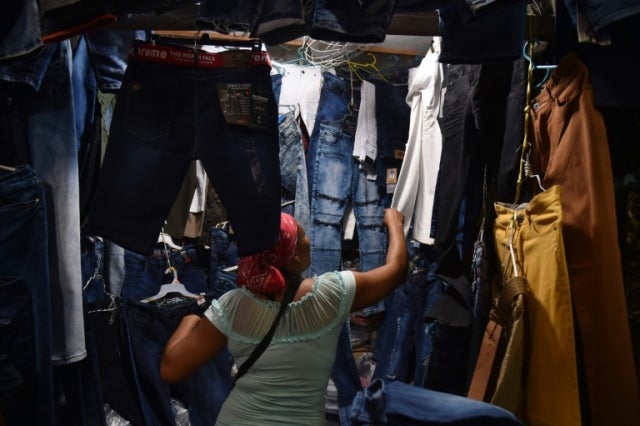 Many Cubans say they come to Haiti because of the low prices and the proximity to their home country. Image: AFP/Hector Retamal

You wouldn’t think the poorest country in the Americas would be anyone’s shopping dream. Yet Haiti has become just that for Cuban merchants.

Cubans, in the region’s only communist country with a still mostly state-led economy, face very high prices and not much selection at all.

So at the Hippolyte street market in Haiti’s capital, vendors — amid piles of clothing and shoes — call out in Spanish trolling for their likely clients: Cubans on short shopping trips.

They will exchange your Cuban pesos to Haitian gourdes, they promise.

“I buy everything: clothes, electronics, shoes… In Cuba, it’s so expensive and, above all, there is not all this choice,” explains Wilfredo Sotolongo, checking the size of beach sandals he was buying.

At home in Cienfuegos, southeast of Havana, the 39-year-old was on his third trip to Port-au-Prince. He never stays as long as a week, and his shopping missions are carried out with almost military precision, in this one small area of Haiti.

Just a few meters (yards) away, his compatriot Maria Carmen from Sierra Maestra, in southwestern Cuba, was in cutthroat negotiations on a lot of women’s underwear.

“They limit us to 30 kilograms (66 pounds) of luggage at home. And we can’t have more than twelve items of the same kind: twelve T-shirts, twelve jeans, twelve bras,” she explains, a roll of tape on her wrist to seal her purchases in a huge plastic bag.

“When the sellers do lots of ten, we (Cubans) do not have a problem, sometimes we divide things up between us to meet the rules: we all know each other on the plane,” she joked.

Just as many American or other western shoppers might be interested in outlets, or online bargains, some Cubans — struggling to make ends meet in their country’s devastated economy — are finding it ever more worthwhile to pop over to Haiti to stock up.

Cuba’s state-run stores offer a range of goods that seem expensive in the country of 11 million. Most people make from $20 to $30 a month.

Launched in 2010, the Haitian airline Sunrise now serves the Cuban cities of Havana, Camaguey and Santiago with four to five weekly flights for each of these destinations.

Cubans are easy to identify in the terminal of Port-au-Prince airport. They are the ones juggling big bundles of clothes, flat-screen TVs or even toys — with not a suitcase in sight.

“I think the Cubans are making a lot of money or they would not come back as often,” said Ketia Louis, at her mother’s stall at the Hippolyte market.

“We do not sell expensive stuff here. But it’s too expensive for many Haitians: now the vast majority of my clients are Cubans — so I like them,” said the 27-year-old.

A neighborhood of Port-au-Prince, located near the airport, has even started to be called “Ti Havana” — “Little Havana” in Creole — because so many of its winding streets include cheap hotels popular with locals from the island to the west.

Near a restaurant decorated with a painted portrait of Cuban revolutionary hero Ernesto Che Guevara, Yamel was picking out hair accessories with the few gourdes she had left.

“The visa, the airline tickets and the hotel for three days: in Havana, I have an agency that takes care of everything,” she explained.

It may be more expensive, but it is less complicated than visiting the Haitian embassy, where people are asked many questions, said the young woman, who preferred not to give her last name.

She said she paid $900 for the package of services — but offered no details about how she could afford such a high price.

Even a Cuban doctor’s salary does not top $30 a month, and the government is sensitive about income inequality.

This was her fifth trip to Port-au-Prince in one year.

So what does she do with all her purchases?

“All this is for me and for my family,” she says, before putting an index finger to her mouth — suggesting the truth is another story.

Despite sometimes dangerous areas around the Hippolyte market, linked to clashes between gangs, Yamel wants to continue her back-and-forth between the two countries.

“Cuba and Haiti are one family.” CC