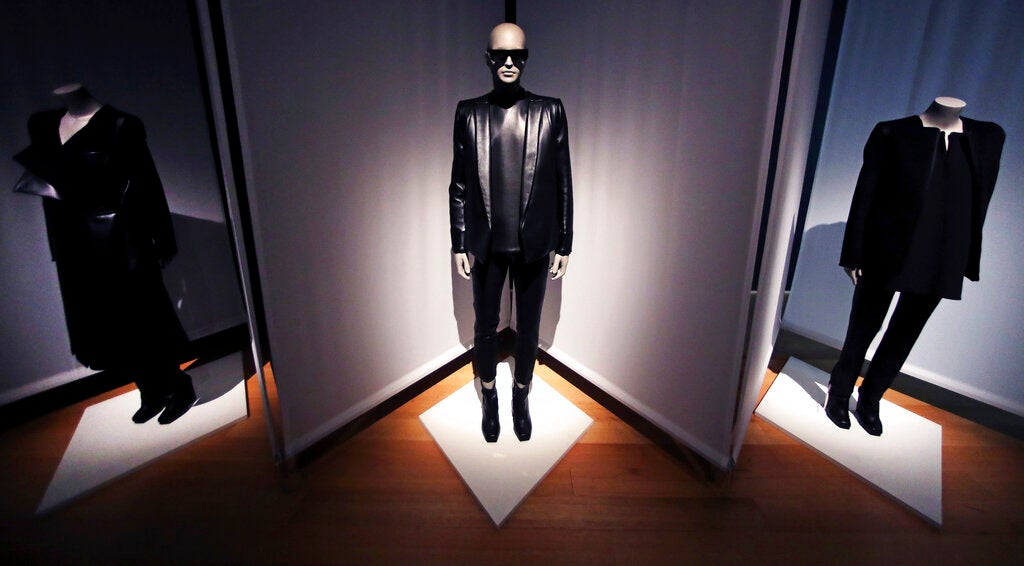 In this Thursday, March 14, 2019, photo, three mannequins are displayed with clothing that combines traditional designs for men with those for women for the "Gender Bending Fashion" exhibition at the Museum of Fine Arts in Boston. The new exhibit at the museum explores how blurring gender lines are redefining the fashion industry. The show opens to the public on Thursday, March 21, and examines moments in history when clothing transcended and muddled our understanding of gender. (AP Photo/Charles Krupa)

‘Both sides of the binary’: Exhibit explores gender, fashion

BOSTON — When actor Billy Porter unveiled his combination tuxedo-ball gown at the Oscars last month, it got people talking.

Porter, the black and gay breakout star of the FX series “Pose,” had bucked traditional Academy Award attire — fancy frocks for the ladies and basic tuxedos for men.

A photo of Porter’s eye-catching Oscar garb is included in a new exhibit at Boston’s Museum of Fine Arts that opens to the public on Thursday. The exhibit titled, “Gender Bending Fashion,” examines moments in history when clothing transcended and muddled our understanding of gender.

The show was inspired, in part, by what’s happening right now in fashion, said Michelle Finamore, a fashion historian and curator.

“The lines are getting more and more blurred,” she said.

“Gender Bending Fashion” is the first large-scale exhibit of its kind to be hosted by a major museum. It is comprised of mixed-media: paintings, record covers and photographs. But a highlight for viewers will surely be the 70 gender-bending ensembles from big-name designers, such as Rei Kawakubo, of Comme des Garçons, and Walter Van Beirendonck, a member of the influential avant-garde group “Antwerp Six.”

One notable inclusion is the tuxedo that actress Marlene Dietrich wore in the 1930 film “Morocco.”

Dietrich has long been hailed as a hero for gender fluidity. It wasn’t uncommon for her to wear top hats, shirts with French cuffs and cuff links, and pantsuits tailored for men.

“She was both sides of the binary in that she was either extremely feminine or extremely masculine,” Finamore said.
The exhibit references the 1920s, a time when women first cut their hair short. Then it progresses to the 1960s and The Peacock Revolution, when menswear shifted from plain and simple to flamboyant, colorful and tailored to the body. The ’60s is also when unisex attire became mainstream. And the present day is thought to be the height of gender fluidity in fashion.

Each of these moments represents a cultural shift within society, said Jo Paoletti, author of the books “Sex and Unisex: Fashion, Feminism, and the Sexual Revolution” and “Pink and Blue: Telling the Boys from the Girls in America.”

In the 1920s, women secured the right to vote and started working outside the home for the first time. The 1960s brought the sexual revolution, gay rights and second-wave feminism — people pushing back against traditional roles.
Today, as the world questions the very relevance of gender definitions, cultural questions are taking visual form in fashion, Paoletti said.

“We are asking what it means to be man or woman,” she said. “Are these terms just a proxy for stereotypes?”

The show is on display through Aug. 25. MKH

Being LGBT in Kosovo: A battle to come out from the shadows