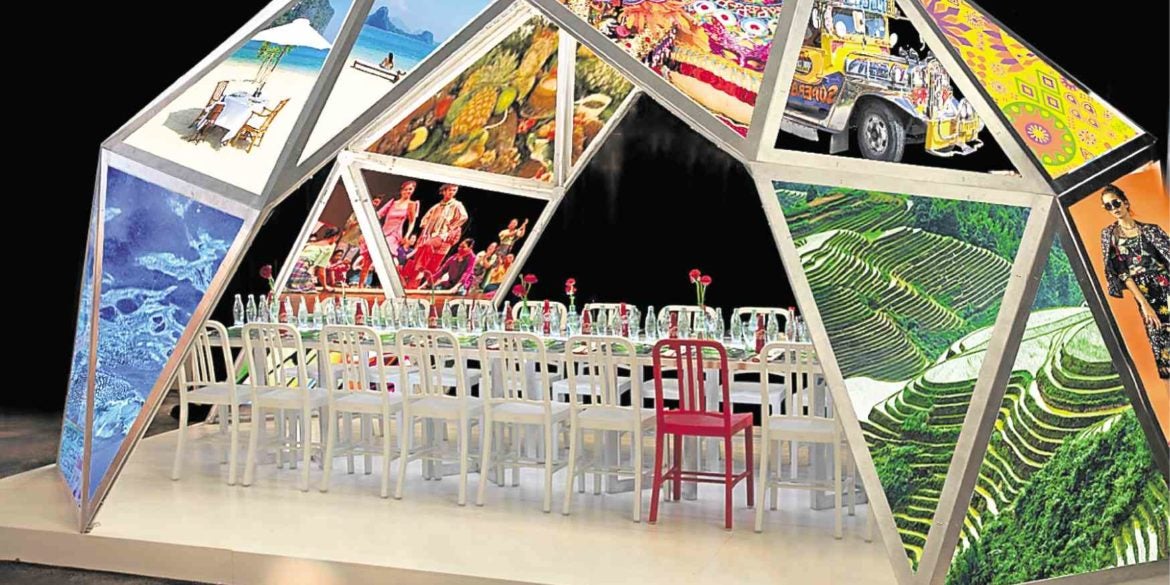 A table setup for Jerry Sibal’s Masterclass, featuring a canopy with Philippine sceneries

Jerry Sibal: A NY success story that began with $300

Jerry Sibal, the Filipino events and floral designer who has built a celebrity following in New York and become a name himself in the trade, has reached the point in his career when he wants to give back and share his knowledge with young Filipino creatives.

Having lived in New York for more than 20 years, he was able to grow his design events firm into a thriving, lucrative business.

He’s now in town to do a series of projects. One of them is producing “Noli Me Tangere: The Opera” which just finished its run at the Cultural Center of the Philippines.

He’s also holding a Masterclass workshop on March 20-23 at Dusit Thani in Makati. This is part of his advocacy, “to give back, specifically for arts and culture. I am excited to share my knowledge and wisdom,” he said in an interview with Lifestyle last week.

“I want to teach people how to expand their learning through event design,” he pointed out.

Sibal recalled how, when he first moved to the United States, he had only $300 in his pocket: “After three days, I was broke. But I worked very hard.”

“Bill Clinton had just become president,” he recounted, “and there were events all over, the US economy was booming.”

That was when his floral design and events venture took off, but he didn’t just rest on his laurels. “I’m competing with the best of the best in the world,” he said, “since New York is a melting pot of cultures.”

For his design aesthetic, he gives credit to his Filipino-Chinese upbringing. “I always have this kind of thinking, because I understand who I am,” he said. “Being Filipino-Chinese, I always wanted to incorporate my background in my style, East meets West—combining the classic with modern treatment, my own identity.”

Sibal stressed that one must study nonstop, must observe and always be aware of what’s going on.

The architecture graduate noted how his formal education made him “very observant.”

He noted that Filipinos could be more creative and innovative because “we make do with what we have, we improvise. That is why, when I went to the States, it was easy for me to create.”

He noted that, in the US, it’s all about ideas, one’s vision which people are willing to pay for: “They are highly committed, thanks to the dignity of work.”

But he added, “I also tell people, don’t worry about how much you have… If you want to succeed, you have to work hard for it.”

Then he told the story of how he started his business with $8,000—in a very competitive city like New York.

As Sibal’s business grew, his clientele included the A-list, such as Oprah Winfrey, Celine Dion, Citibank, the royal family of Qatar. He was one of the few creative influencers invited by Richard Branson of Virgin Atlantic to join the airline’s inaugural Chicago-to-London flight in 2007.

For his Masterclass at Dusit, Sibal plans to use and promote local materials. “I am inspired right now by the indigenous fabrics of Mindanao,” he said. “I used them back when I was a dancer.”

His ultimate goal is to promote Filipino design internationally. “We have local eyes already, what is lacking are international eyes.”

He believes that while we have good products, we have yet to develop the capacity to market them.

Sibal wants to work with the younger generation. “Follow your dreams, but the most important thing is to be patient,” he advised. “Young people are in a hurry to reach the top. The younger generation is so advanced in terms of technology, but it doesn’t mean that if you are a techie, you’re good at everything.”

If you want to be your own boss, you must go out and socialize, Sibal said. “That’s how you network. Everyone seems to be married to his or her phone. Young people lack social experiences—and that is very important.”

Asked what’s next for events designing, he said that the field is here to stay: “It changes fast like technology. But one thing is certain—events are a celebration of life, and any event carries personal significance for everyone.”