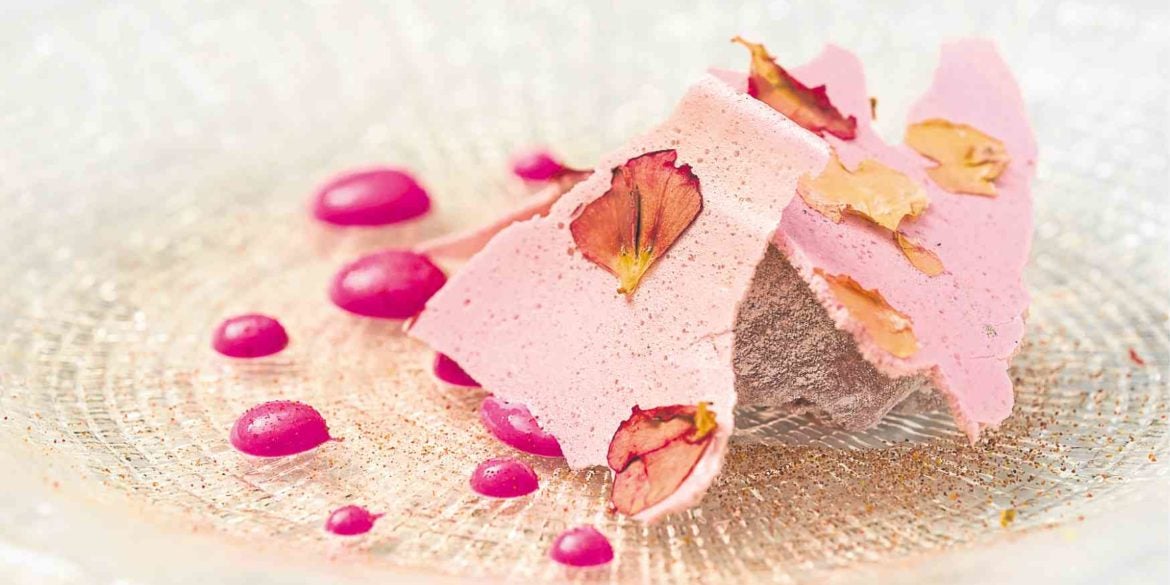 The ever-changing menu at Helm looks gimmicky, but it’s organic and tells a coherent story

By the time this sees print, Josh Boutwood will have changed his menu at Helm, from the “colors” one that we enjoyed last weekend to something he is not inclined to reveal at this point—except that it will be more “interactive.”

My guess is that the guests will be served each course in a locked room, and the food will contain clues on how to get to the next part of the maze. But that’s just me.

The fact that you won’t get the same menu that I’ll be reporting on should not stop you from visiting Boutwood’s new degustation spot. This is not a sing-along. This is not “The Phantom of the Opera” where the audience, chances are, will hum the songs longer than some of the cast members are around.

This is, incidentally, also probably the last week you’ll get food news that isn’t about Asia’s 50 Best Restaurants. The selection committee, especially for Asia, has a reputation for being predictably unpredictable.

But at this point, it is generally predicted that Toyo Eatery will follow up its “The One to Watch” award from last year with an actual placement on the list.

Gallery by Chele is also tipped to win something. The  others that compete in the same league of creativity are Bruce Ricketts’ Mecha Uma, which is again, unfairly, likely not to get anything (though I would be very happy to be wrong), and of course Helm, which, in all fairness, is fairly new to the game.

I am confident that Boutwood will eventually make it to this and other awards—and I will put the full weight of my two dozen or so followers on Instagram to this effect. Just you watch.

Color chart for a menu

When you’re on a film set, you might hear someone, usually cinematographer (director of photography or DP), yell something that sounds like, “pakbet!” What he is actually referring to is the Macbeth color checker—a grid of squares of different hues that DPs use to try and get the range of tones recorded by the camera as close as possible to real life. When you step into Helm, instead of a menu, you are greeted by what looks like a small Macbeth chart.

Each of the colored squares represents a course on the menu that consists of a dish which corresponds to the color. Given the wide range of colors on the guide, including a vibrant blue, we were quite curious about how he’d pull it off. (The blue, in case you’re wondering, turned out to be a dessert made from the Clitoria ternatea flower.)

Although it looks gimmicky, it’s actually organic and the menu tells a coherent story. There was no single dish that seemed to exist only to justify the presence of a color on the chart.

The food was what you would expect from Boutwood at his best—technically very complex and demanding for the cooks preparing it, mixing a variety of flavors, textures, and scents, but all of it coming together in the mouth with seeming effortlessness.

It’s an easy meal to enjoy, but that doesn’t mean it doesn’t run deep and wouldn’t stand  scrutiny if you were the type to intellectualize it. The food is either yummy or it isn’t. This one is.

One thing we noticed while waiting for Helm to open (Boutwood is apparently a stickler for punctuality, so we arrived 45 minutes early) was that Arya Residences still had its fountains on. It’s not just them, though—all the usual advisories you would get from the newspapers or the government during a water crisis seem to be conspicuously not happening.

A hosepipe ban (for watering lawns or washing cars) would usually be in order. Public and private fountains, waterfalls, and the like should be turned off. Golf courses, private swimming pools, and other nonessential uses of water should be curtailed, either by law or by strong memorandum. This, and sharing of water between the two utility companies servicing Metro Manila, is how one gets through a shortage.

Instead, those who’ve got it, flaunt it—and it’s every man for himself. Bestank is rumored to have sold out months of stock in a few days, there’s not an Orocan to be found for love or money, and the demand for high-powered pumps has gone up so that you can fill up your cistern at the expense of the neighbors.

I’m old enough to remember the generator arms race during President Ramos’ time, when people would buy the biggest generator they could find and place it as far away from their house (i.e., as close as possible to their neighbors’).

Social media is rife with conspiracy theories: there’s actually water in the dam, there’s a critical bypass valve that wasn’t opened, actually there’s no water crisis and it’s the fault of the “yellows.”

Since it’s unlikely that we’ll ever know what really is going wrong, anyone who still has water should try and avoid wasting it. If you have running water and you know people who don’t, invite them over for a shower.

If a restaurant has to serve you on paper plates because it doesn’t have the resources to wash up, just roll with it—we’re all in this together. —CONTRIBUTED