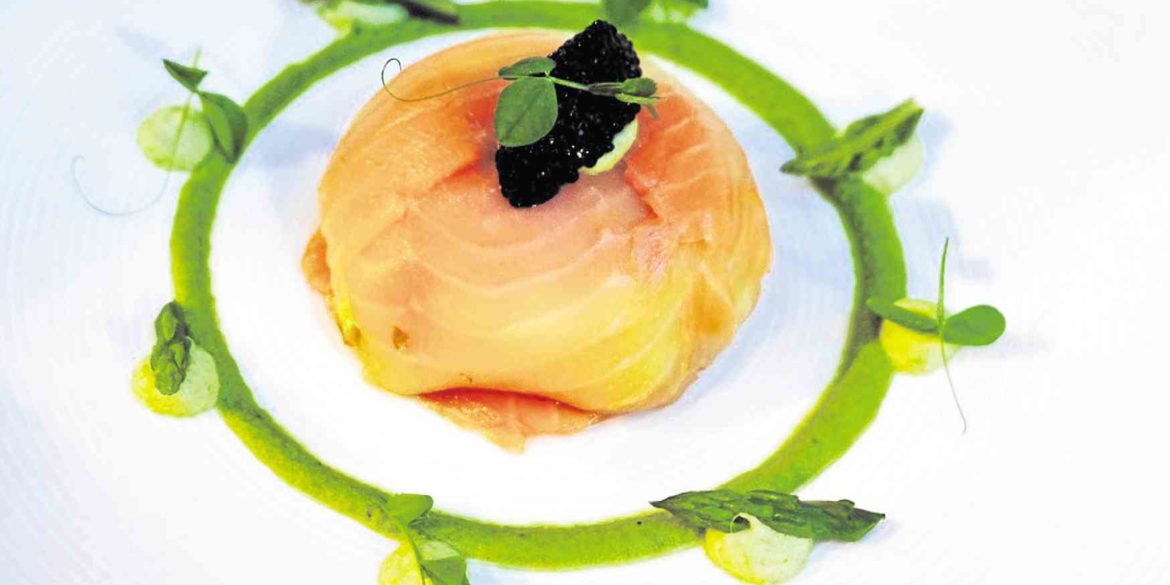 Today, March 21, thousands of restaurants in 150 countries will be serving a special menu to celebrate “Gout de France (Good France).”

Now on its fifth year, the global event that fetes French cuisine is a project of the French Ministry of Foreign Affairs and French chef Alain Ducasse to mark France’s inclusion, in 2015, in the World Intangible Heritage List of the Unesco (United Nations Educational, Scientific and Cultural Organization).

This year, more chefs are joining the Philippine edition, totaling 26. Most are in Metro Manila, and at least one each in Cebu City, Baguio, and, surprise, Bukidnon.

Focus this year are on healthy dishes (less fat, sugar, salt), “respect for the planet’s resources,” or “sustainability.”

The menu consists of starter, main course, cheeses and dessert, served with French wines and spirits.

This year’s launch of “Gout de France” was held at the Champagne Room of Manila Hotel. Tables offered samplings of set menus of participating chefs and allowed interaction between them and guests.

French Ambassador Nicolas Galey was ecstatic about how participation grew from six chefs when “Gout de France” debuted in 2015, to 26 this year.

We were drawn first to places and chefs we’ve known, and to ingredients we missed.

Martin Kaspar of L’Entrecote, Manila, had salmon carpaccio with oysters chive, a flavorful appetizer from the former Manila Hotel chef who also marked the event as a homecoming.

Jessie Sincioco gave a sampling of her wild-game dish with herbed dumpling.

Clement Damotte of La Mere Poulard had a crispy camembert with Normandy sauce.

All the starters and a cheese course were making us full, but there were still many more to try.

Konrad Walter of the Champagne Room put together scallops, foie gras, asparagus and caviar that were too tempting to resist.

Vicky Pacheco of Chateau 1771 had a tasting portion of five-hour-stewed duck.

The crispy duck confit of Duck and Buvette was there but the chef, Jacq Tan, was absent.

That evening was also an introduction to new places and chefs.

The smell of coffee was what drew us to Cocoy Ventura’s SGD Roastery which offered Pamora Farms Sasso chicken, flavored and made aromatic with coffee beans from Sagada.

Glenda Maupin of Petit Bistro, who herself looked petite, gave a tasting of garlic and paprika shrimps—a puzzle because the dish is from Catalonia.

My introduction to Trish Panlilio of Mulberry Door was through her salad Nicoise with grilled tuna.

John Louie Gonzaga of Milagritos at Tryp did a simple scallops dish.

Apart from Tagaytay’s Samira chef Jonathan Bouthiaux, there was another out-of-town chef, David Oyver Virrey of Eiffel Kubo in Malaybalay City, Bukidnon. He had chocolate Lutya truffles. But more interesting is his menu, in which some items, like Manok au Vin and Bibingka Delight Soufflé, enhance his Filipino-French restaurant’s name.

Desserts were equally tempting. Pierre Cornelis of Vatel, the restaurant of the hospitality school bearing the same name, presented a pie that used Philippine products, Malagos chocolate and fresh mangoes.

Restaurant 101 of Enderun had a cool, one could say perfectly coiffed lychee-raspberry tart.

And Gene Gonzalez of Café Ysabel asked us to wait for his mulled red wine ice cream to freeze properly, which accompanied the tarte tatin.

There were restaurants and chefs who didn’t make it to the launch, but will be serving “Gout de France” menus today: Ariel Manuel of Lolo Dad’s, Didier Derouet of Café Adriana in Baguio, Robert Lilja’s of Maria Luisa’s Garden Room, Herve Clair of Mireo at Raffles, Marc Aubry of Sagana, Patrice Freulson of Tauro, Richard Amado of La Vie in the Sky in Cebu, and Waya Araos Wijangco of Gourmet Gypsy Art Café.