Dad gets tons of greetings thanks to birthday billboard | Inquirer Lifestyle ❮ ❯ 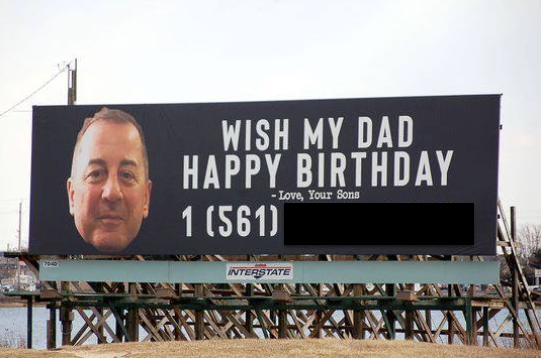 Dad receives thousands of greetings, thanks to sons’ birthday billboard

One dad got the surprise of a lifetime when he was bombarded with thousands of calls and messages from strangers wishing him a happy birthday. Except, the greetings came days before his actual birthday.

Chris Ferry of Linwood, New Jersey already had a hunch who could be behind the stunt after a stranger told him he found his number on a billboard.

His two sons Christopher and Michael, who both live in Florida, wanted to give their dad a birthday so memorable they bought him a billboard for his 62nd birthday, as per KYW last March 10. The brothers bought the said billboard along Black Horse Pike in Atlantic City and had Ferry’s face plastered on it along with his phone number and a message: “Wish my dad happy birthday. Love, your sons.”

“I got the joke, it was funny, it was good,” Ferry said in the report. “And then I thought, ‘man, I’m going to be getting a lot of phone calls.’”

And he did. Over 10,000 strangers sent Ferry calls, voicemails and messages, so much so that he could no longer reply to each one and had to change his voicemail. His new voicemail now says, “Thank you for calling to wish me a happy birthday, I really, very much appreciate it.”

The birthday greetings came from all over the United States, while some were from overseas. The greetings varied, too; while others greeted him with a simple “happy birthday,” others wanted to engage in an actual conversation with Ferry.

One of Ferry’s sons, Christopher, has said the billboard was all done out of love for their father. He also posted about it on his own Facebook page last March 16, Ferry’s actual birthday.

“We wanted it to be a birthday for him to remember,” Christopher was quoted as saying. “There was a little piece of me that was scared at first, putting his phone number out there, but we thought to ourselves ‘go big or go home.’”

Ferry has since admitted his 62nd birthday is his most memorable yet, thanks to his sons’ billboard stint, but the latter are ambitious. Christopher said in the report that the only way they can top this is to get their dad an even bigger billboard in the future. Cody Cepeda/JB