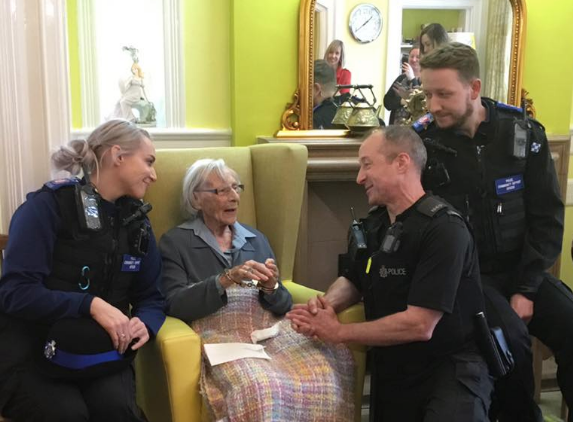 While others would want to get a car or a million dollars if they could have the chance, one 104-year-old woman had something else in mind.

Anne Brokenbrow, a resident at the Stokeleigh Care Home in England, wanted to be handcuffed and arrested by police officers, as per BristolLive on March 14.

Her request came after the care home participated in the Wishing Washing Line initiative where shoppers contact the elderly involved and grant their wishes, if feasible. For Brokenbrow, she wanted nothing more than to be arrested.

“My wish is… to be arrested. I am 104 and I have never been on the wrong side of the law,” she wrote on a slip of paper.

Odd her request may have been, the police officers of the Avon and Somerset force were more than happy to grant her wish.

The care home took to their official Facebook page where they shared photos of Brokenbrow being arrested by three police officers. Photos showed the centenarian being wheeled out of the care home. They also posed together for pictures.

“What a magical day! Today Anne got her wish to be arrested at the grand young age of 104 for being [an] upstanding citizen!” Stokeleigh Care Home wrote on March 20. “It’s something that she has always wanted to experience.”

What a magical day! Today Anne got her wish to be arrested at the grand young age of 104 for being a upstanding…

The police officers made sure Brokenbrow got the complete experience, as they handcuffed her wrists and also took her for a ride in the police car.

“Anne has had a great day,” the care home stated. “She enjoyed every minute from the hand cuffs to the ride in the police car. It really has been fantastic!” Cody Cepeda/JB