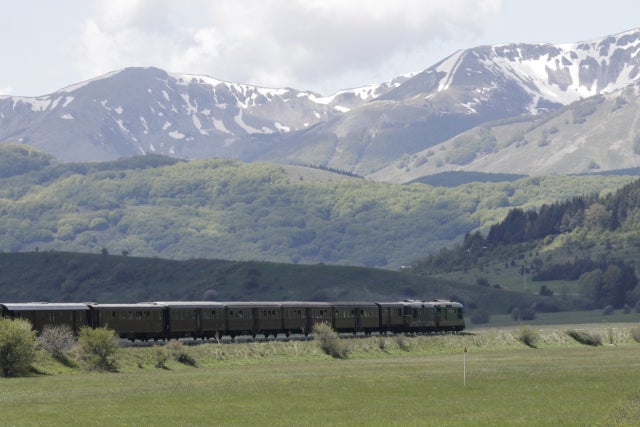 All aboard Italy’s ‘Trans-Siberian’ railway

Destroyed first by the Nazis and then by government cuts, Italy’s very own “Trans-Siberian” railway has reopened thanks to the work of hobbyists, taking travelers back in time through the snowy Abruzzo mountains.

The Sulmona-Roccaraso section, reaching an altitude of 1,269 meters (4,163 feet) at its highest point, was opened in 1897 and is a feat of engineering, winding its way up the steep, rocky mountainside in a series of long, elegant loops.

Even the occasional wolf can be seen along the way.

“It’s really an amazing experience, going back in time, with these slow-moving trains, rather than really fast ones where you can’t see anything outside,” said Neapolitan tourist Elisabetta, traveling with her partner and 10-year-old son Giosue.

Usually “you’re isolated from the sound, while here you can hear the noise of the train,” she added, with a beaming smile.

Historically, the line played a vital role linking up isolated communities in the Apennine mountains, less than two hours’ drive from Rome.

The railway line was destroyed by the Nazis during World War II as they were defeated by Italian partisans backed by the British, and it was only reopened in 1960.

But by the late 20th century, roads had improved and the line was completely closed in 2011 after decades of government cuts.

Then, in 2014 passionate enthusiasts from the Le Rotaie association dedicated to safeguarding old railways teamed up with the Italian Railways Foundation to get the line known as the Neapolitan reopened.

To school, work or Americas

“This line went to Naples, to the port of Naples, from where so many Italians boarded ships to emigrate to the Americas,” said Le Rotaie’s Claudio Colaizzo, whose day job is as a travel agent.

“It was also hugely important for everyone who lived in the region, because it allowed people to go to school or work even when the weather was bad, when there were two meters (6.6 feet) of snow,” said Colaizzo, who travels to the train from Pescara on Italy’s east coast.

He describes himself and his fellow amateur train addicts as “trainsexuals”.

The carriages are known as “hundred doors” as passengers can climb on board at almost any seat, pulled by a comparatively recent, and smelly, 1970s diesel locomotive.

Where the train stops, travelers get off and can buy local cheeses or sausage, injecting cash into often isolated communities.

Abruzzo native Vinicio D’Agostino is one of a band of folk musicians who board the train to accompany the hypnotic sound of the trains on the tracks.

He remembers when he used to take this train back in 1969.

“Fifty years on, it was very emotional to get back on board,” said D’Agostino, who gave his age as around 70.

“My companions can tell you, I said ‘mamma mia’, I took this train to do my military service, it was just amazing,” he said, before getting back to his traditional drumming.

Le Rotaie dreams of restoring the entire line running between Pescara and Naples, joining the Tyrrhenian and Adriatic seas on either side of Italy.

For now, a first-class velvet-covered seat costs 40 euros ($45 or P2,380) for a return trip from Rome, or you can opt for cheaper wooden benches in third class for 30 euros. NVG