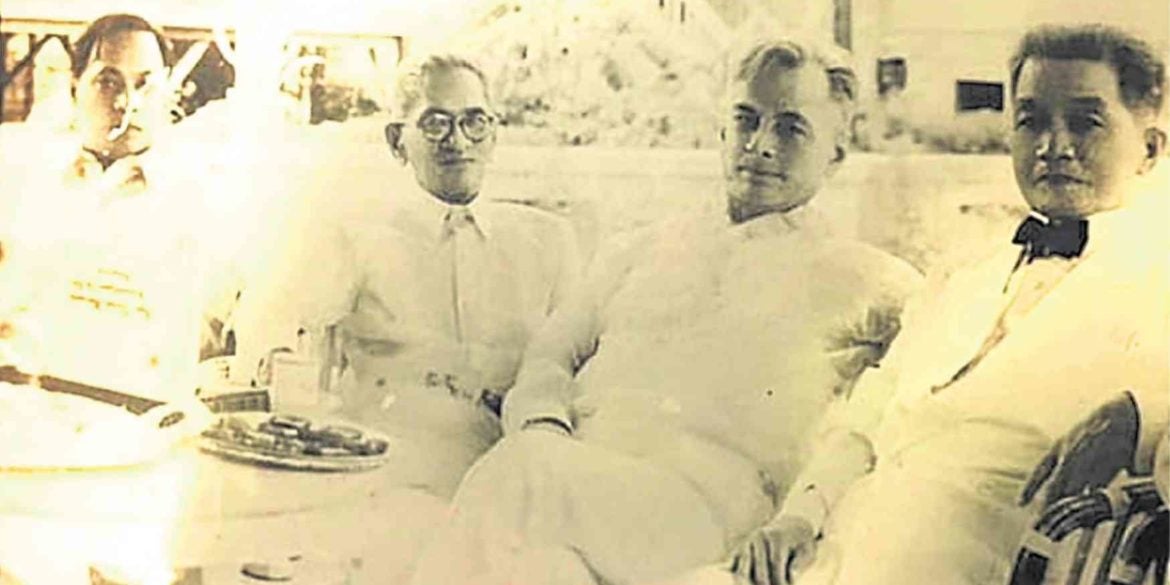 Aguinaldo (right) and Manuel Quezon (beside him), who had fought a bitter campaign for the Commonwealth presidency, reconciled on July 21,1941 during the birthday of Sen. Daniel Maramba (beside Quezon).

Hero or heel? Historians weigh in on Emilio Aguinaldo

The 150th birth anniversary of the first president of the first Asian republic affords Filipinos the chance, according to historian Eloisa Parco-de Castro, to have ‘a more nuanced understanding of his unique imprint on the story of our nation’

The nation is commemorating this year the 150th birth anniversary of Gen. Emilio Aguinaldo, affording historians a chance to sort out the controversies hounding the first president of Asia’s first  republic.

Born in Kawit, Cavite, on March 22, 1869, Aguinaldo became a leading figure of the Philippine revolution against Spain.

He was elected president of the revolutionary government in the controversial Tejeros Convention in Cavite in 1897 and led the Philippine resistance when the United States invaded the country the following year.

But his name was tainted by  the deaths of Andres Bonifacio, the founder of the Katipunan revolutionary movement, and his brother Procopio, and of Gen. Antonio Luna. There are claims Aguinaldo ordered their executions.

In line with Aguinaldo’s birth sesquintecentenary, historians are weighing in on the life and legacy of the controversial figure.

Last March 19 to 21, the International Conference on the 150th Birth Anniversary of Gen. Emilio Aguinaldo at the Lyceum of the Philippines University in General Trias, Cavite, “generated diverse papers reflecting many known and  still unknown dimensions of Aguinaldo’s rich, long and controversial life,” said Eloisa Parco-de Castro of the University of Santo Tomas.

She explained the conference “should lead to a more nuanced understanding of Aguinaldo’s unique imprint on the story of our nation, and of our continuing road to genuine sovereignty.”

Jose Victor Torres of De La Salle University (DLSU) Manila described the controversies revolving around Aguinaldo as unfortunate “because there is more to his life and his place in our history.”

He said Aguinaldo was after all the first president and the head of a fully functioning government of an independent country, not a pseudo-government as what the American invaders claimed.

“We have to give him credit for that—for it was that independence that he proclaimed in 1898 that was the climax our forefathers fought for in the Philippine Revolution,” Torres explained.

Dwight David Diestro of the University of the Philippines Los Baños (UPLB) said Aguinaldo’s leadership was instrumental in the establishment of Asia’s first republic.

“It was a difficult time but he did what was humanly possible and to the best of his ability,” he said.

Another UPLB historian, Gilbert Macarandang, said Aguinaldo should be understood in the context of his time. He explained Filipinos should consider Aguinaldo in his totality rather than focusing on his alleged weaknesses and failings.

Emmanuel Calairo of  DLSU  Dasmariñas stressed that Filipinos should go back to the basics and research and get their facts straight since the negative issues hounding Aguinaldo were  “interpretations.”

He said there was not enough evidence that Aguinalso was directly involved in the killing of Antonio Luna since he didn’t have any personal motive to have the equally controversial general killed.

It was the Kawit Company, not Aguinaldo, which was involved in Luna’s death, Calairo said. He explained Aguinaldo did not accost Luna’s perpetrators because the war was raging.

Calairo added that issues linking Aguinaldo with the deaths of the Bonifacio brothers were based mostly on interpretations, not facts.

He said there was not a single case that Aguinaldo ordered the killing of a Katipunan soldier, more so his “bosom friend, Andres.”

Knowing that his decision would be unpopular, Aguinaldo signed the death penalty for the Bonifacio brothers because he gave in to his generals Pio del Pilar and Mariano Noriel, explained Calairo.

He said Aguinaldo signed it “for the sake of unity.”

Calario said Aguinaldo should be remembered and credited for “significant legacies,” such as June 12 as Independence Day or Philippine National Day, the national anthem, and the national flag.

Inaugurated was the  exhibit, “1869: Cementing the Road to Independence,” which featured the special coin and postage stamp made by the Bangko Sentral ng Pilipinas and the Philippine Postal Corporation.

Earlier the international conference on Aguinaldo was  attended by scholars from all over the world, such as Reynaldo Ileto of the Australian National University, Lance Collins of the Hawaii Institute for Philippine Studies, Satoshi Ara of the Fukushima University in Japan, and Karl Ullmer’s descendant Fritz Hack-Ullmer of Germany.

Other events: lecture series by the Philippine Navy;  launch of the book, “Emilio Famy Aguinaldo: Iba’t Ibang Anggulo sa Pagkilala sa Pangulo ng Unang Republika,” at the Center for Cavite Studies at the DLSU-Dasmariñas; and the musical production “Miong” at Greenbelt 1 in Makati.

The monthslong commemoration is spearheaded by the National Historical Commission of the Philippines; it started last October and will close on June 12. Theme is  “Aguinaldo: Kalayaan at Kasarinlan.”

De Castro noted that Aguilando lived to be almost 95 years old and his life should require a “reexamination”: “Was his life portrayed as he lived it, or at least, how he professed to live it? Or was it an image crafted by writers? How closely does it hew to the person of Aguinaldo?”

“These are valid questions,” said De Castro, “which may only be answered by a thorough review of the process of how his life is presented in historical writing; and of how these writings influenced the way he is regarded today.”