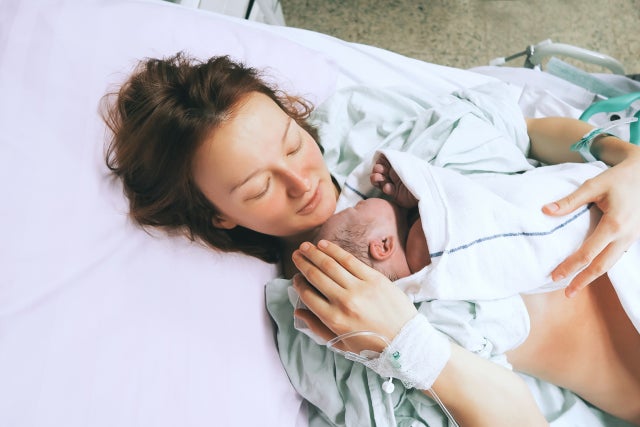 Mother holding her newborn baby child after labor in a hospital. Mother giving birth to a baby boy. Parent and infant first moments of bonding. Image: IStock/NataliaDeriabina via AFP Relaxnews

New Israeli research has found that giving birth at home could pose a bigger danger to infants than giving birth in a hospital, increasing the risk of complications and stillbirth.

The findings, presented in Las Vegas at the Society for Maternal-Fetal Medicine’s 39th Annual Pregnancy Meeting in February, showed that after taking into account factors such as ethnic background and the mother’s health, age, smoking status and other health habits, the risk of a giving birth to a stillborn infant was significantly higher — 2.6 times — for women who delivered in a non-hospital setting compared with patients who delivered in hospitals.

“This study matches the findings of larger studies conducted in the United States and confirmed our hypothesis that childbirth in non-hospital settings is far more dangerous than in hospitals,” said Sheiner.

“There is no question that a hospital provides the most secure environment to give birth, both for mothers and their babies. Even with the advances in modern medicine, childbirth is still traumatic for both the mother and child and it is critical to be prepared for any scenario.”

“Once-upon-a-time, the difference between home and hospital for giving birth was less important because of our ancestors’ limited understanding of medicine, but today there is a quantum difference,” he added.

“Tracking both the mother’s and baby’s progress, and vital signs in real time as well as immediate access to emergency treatment and operating rooms gives the medical team a far better chance to effectively navigate a difficult birth situation.” CC