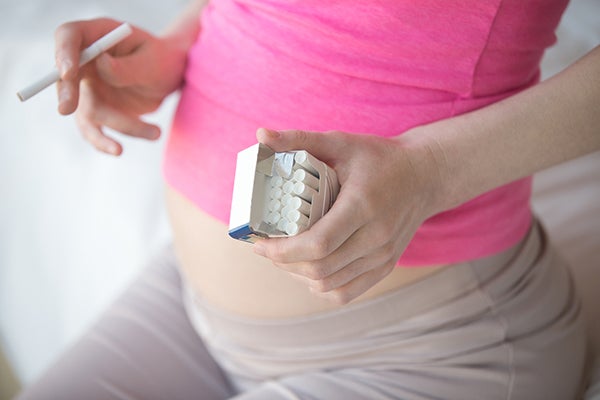 New research has linked smoking before and during pregnancy with an increased risk of sudden unexpected infant death syndrome. Image: IStock/fizkes via AFP Relaxnews

New US research has found that smoking before and during pregnancy could increase the risk of sudden unexpected infant death (SUID), which occurs in infants under the age of one.

Carried out by researchers at Seattle Children’s Research Institute and Microsoft data scientists, the new study looked at data on 20,685,463 US births between 2007 and 2011, including 19,127 cases of SUID.

The researchers at AI For Good Research Lab at Microsoft used Microsoft Artificial Intelligence (AI) technology to analyze the mothers’ cigarette smoking habits for all of the births included in the study.

“Using AI, we built machine learning models that analyzed millions of pieces of data on child births and deaths, including mothers’ smoking histories, allowing us to do something that was not done before: assess the impact that each additional cigarette has on SUID at this level of granularity,” explained one of the study’s co-authors, Juan Lavista.

The findings, published in the journal Pediatrics, showed any amount of smoking — even just one cigarette a day — appeared to double the risk of SUID.

“With this information, doctors can better counsel pregnant women about their smoking habits, knowing that the number of cigarettes smoked daily during pregnancy significantly impacts the risk for SUID,” said lead author Dr. Tatiana Anderson.

“Similar to public health campaigns that educated parents about the importance of infant sleep position, leading to a 50 percent decrease in sudden infant death syndrome (SIDS) rates, we hope advising women about this risk will result in less babies dying from these tragic causes.”

Anderson added that if no women smoked during pregnancy, the researchers the current SUID rates could be lowered by 22 percent.

“The most important takeaway is for women to understand that quitting smoking before and during pregnancy by far results in the greatest reduction in SUID risk,” she said. “For pregnant women unable to quit entirely, every cigarette they can eliminate will reduce the odds of their child dying suddenly and unexpectedly from SUID,” says Anderson. CC

Smoking, painkillers during pregnancy linked to earlier puberty in children