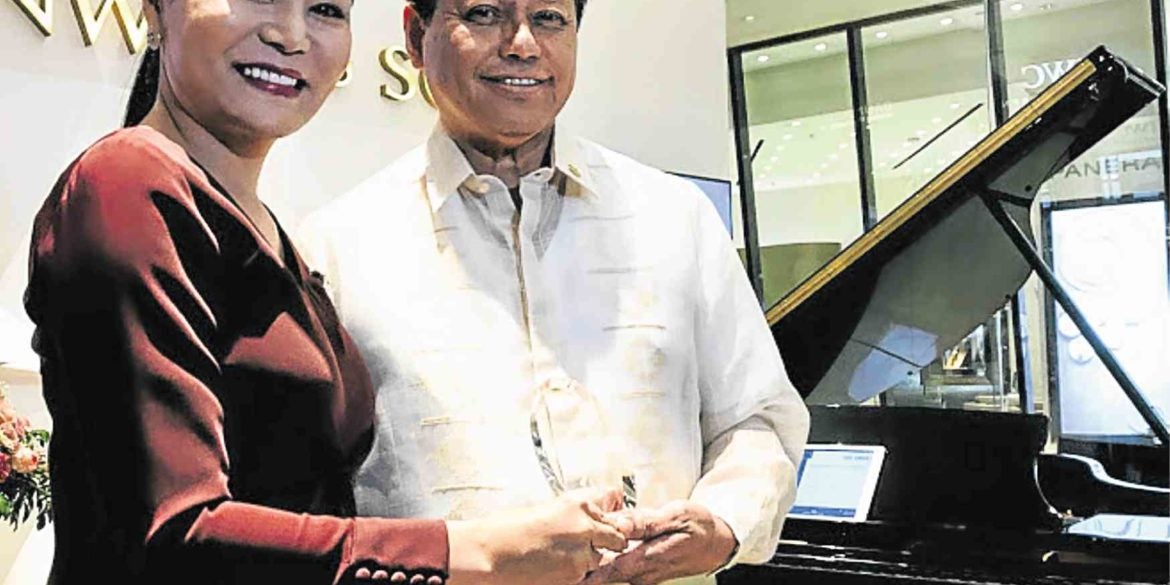 The music swirled, filling the room with the haunting strains of a familiar melody. “Bato sa Buhangin,” an original Filipino composition, had never sounded as seductive. Rich, powerful chords and seamless running passages that build into a crescendo embellished a theme as sweet as nectar.

The small audience gathered in the Steinway Boutique at Shangri-La Plaza was totally mesmerized. Especially because there was no pianist on the keyboards.

The pianist, Raul Sunico, was actually standing at the sidelines, watching as the keys on the piano played the music by themselves. It was like an invisible force had taken over, or perhaps the piano had developed a mind of its own.

Though Sunico’s musical performances have always been magical, this was a different kind. What powers had he developed? Or perhaps he had some kind of remote control that presses the precise notes on the piano while he watches from a distance?

The answer lies in the Spirio—the latest innovation from Germany’s venerable piano manufacturer Steinway and Sons.

Looking like one of Steinway’s magnificent grand pianos, the Spirio has a secret—it can play high-quality music by itself, using a combination of advanced technology, software, artificial intelligence and artistry. It’s compatible with an Apple iPad.

The music that was playing that evening had been pre-recorded in New York months ago by Sunico on the Spirio, and it was simply played back while Sunico stood by—to the astonishment of the audience.

But just to show who was still the boss, Sunico next took over the keyboards, and played “Bato sa Buhangin” all over again, a visible presence on a visible piano.

Although there were still the brilliant passages, the occasional trills and the compelling chords enhancing the original melody, this time there were subtle differences, perhaps a longer running passage here, or a slightly different resolution there.

Such is the talent of Sunico for improvisation that he can’t play the same composition exactly the same way twice. His fingers press the notes and stretch into chords intuitively, like they were being guided by a higher power.

It is one of his talents that so impressed Celine Goh, general manager of Steinway Gallery Singapore and Steinway Boutique Manila, that she began to consider naming him a Steinway artist.

After attending some of his performances, listening to his recordings and meeting with him at the Cultural Center (CCP) where he was president, Goh decided that Sunico, indeed, was worthy to be conferred the distinguished title of Steinway artist.

“He’s the most deserving, with his remarkable career as a dean, educator, CCP president, and arts manager, and his solo career as a concert pianist that has taken him all over the world,” Goh said. “He has also had numerous recordings of Filipino music and has done so much for Philippine culture and music.”

Sunico joins an impressive roster of about 1,800 renowned pianists who have been similarly honored.

As a surprise, a video clip was played all the way from Hamburg, with a message from Gerrit Glaner, Steinway’s head of the Concert and Artist Department. Aside from sending a congratulatory message to Sunico on behalf of Steinway and Sons, Glaner also said Sunico’s photograph will now be part of the gallery of outstanding artists in Steinway’s headquarters in Germany.

Invisible hands notwithstanding, the audience wasn’t about to let Sunico get away with playing only once, especially not on a Steinway Spirio.  Upon their urging Sunico next played Franz Liszt’s transcription of Wagner’s “Tristan und Isolde,” and another Filipino composition, “Hanggang sa Dulo ng Walang Hanggan.”

With Sunico’s recording of five Filipino compositions, which will now become part of Steinway’s library, Sunico hopes to make Filipino music part of the world repertoire.

“The sound of Steinway is always inspiring,” he said.

He hopes it will prod young artists to play on good-quality pianos.

In addition, with the Spirio, it is now possible to listen to outstanding music from the masters, right in one’s own living room.

And if people are so inclined, they can even sit before the Spirio, put their hands on the keyboards, and pretend that they are actually the one playing the music (even though it may be a recording of Sunico, or of Rachmaninoff, or of other great international pianists, that’s powering the keyboard).

The fulfillment of such fantasies may not be the original intention of the makers of Steinway, but it’s a possibility for those wealthy enough to acquire a Spirio (to the tune of P9.5 million).

As a newly conferred Steinway artist, Sunico will perform in Singapore on June 3 as part of the Pioneering Artists of Southeast Asia series.

To be held at Victoria Concert Hall, the concert promises to be full of wonderful surprises, showcasing not only Sunico’s artistry and virtuosity, but also the amazing capabilities of Steinway’s Spirio piano.