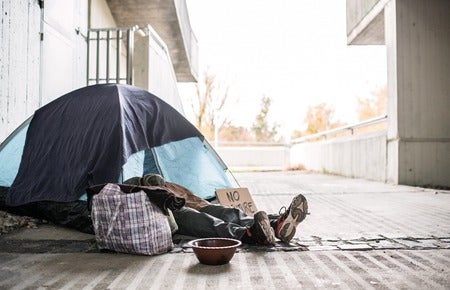 Things turned out for the better for one homeless man in England, thanks to a 16-year-old girl’s small act of kindness.

Charlotte Howard of Hastings was at the bus stop when she saw a homeless man’s tent nearby, as well as a handwritten note. She took a picture of the man’s tent and the note before sharing it on Facebook last March 12 in an attempt to help him find a job.

“Just saw this while waiting at the bus stop in Old Town opposite The Pelican,” she said. “Breaks my heart seeing things like this. Please share and try to help him get a job.”

Just saw this while waiting at the bus stop in old town opposite the pelican, breaks my heart seeing things like this. Please share and try to help him get a job. ❤️❤️

The homeless man’s note read: “Work wanted. I will do a trial for free to show how I work. I don’t take drugs or drink.”

The homeless man listed the things he can do, such as dog walking-minding, window cleaning, shopping, gardening, car washing, housework and cooking, among others.

“Anything to earn a living and make life seem worth living,” he wrote. “Help change a life.”

Howard, who was moved by the note, went on to create a GoFundMe page for the homeless man. Her £300 ($395 or P20,700) goal was so she could buy a caravan for him as well as other basic necessities. Donations, however, continued to pile up and she received more than she expected. As of this writing, Howard has raised over £2,300 (approximately $3000 or P160,000).

The homeless man has since been identified as 37-year-old Anthony Johnson, as per the Hastings & St. Leonards Observer on March 20. He has also been contacted by a landscape gardener named Nelson Smith for a potential job following Howard’s post.

“The reaction after Charlotte posted the note was weird. I was suddenly bombarded with certain things,” Johnson was quoted as saying, as he confessed he used to be a “horrible person living a horrible life.”

He spent time in and out of prison and was rendered homeless after finishing a four-year jail term. Today, he credits Howard for helping him have another go at life.

“It’s not like I haven’t previously been asking for help but all it takes is an open-minded person like Charlotte to come along and help, ” he said. “She saw me and recognized my position and decided she wanted to do something to help. I wouldn’t have got anywhere looking for a job if it wasn’t for her.”

Meanwhile, Smith was compelled to reach out to Howard after seeing her post, since he saw in Johnson a man just trying to help himself and turn his life around.

“I have had problems with mental health in recent years and in this post I saw someone trying to help themselves,” Smith said in the report. “I contacted Charlotte and said I might be able to find something for him.” Cody Cepeda/JB