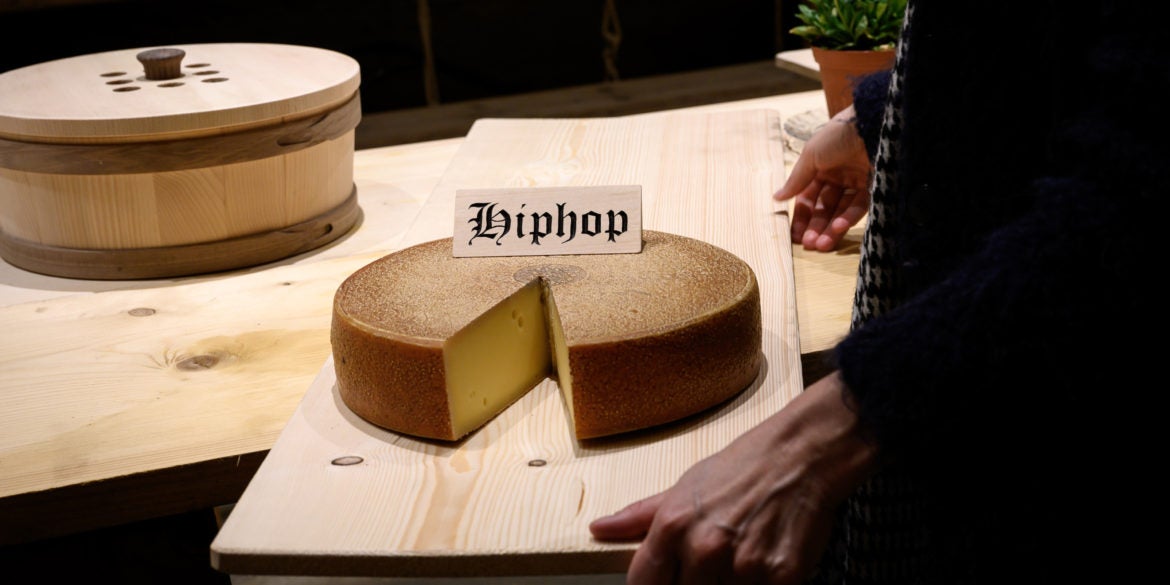 This picture taken on March 14, 2019 shows a round of cheese that has been matured for 6 month with hip hop music, on the final day of an experiment conducted by the University of the Arts in Berthoud, in the Emmental region, central Switzerland. - Beat Wampfler, a Swiss veterinarian by day, but consumate apron-wearing cheese enthusiast at night, has embarked on an experiment to test the impact of music on Emmental. Since last September, the cheeses have each been blasted with sonic masterpieces from the likes of rock gods Led Zeppelin or hip-hop legends A Tribe Called Quest to techno beats, ambient choirs and Mozart's classic Magic Flute. A jury of expert tasted the cheeses on March 14, 2019 and the tasty winner the cheese matured with the hip-hop album. (Photo by Fabrice COFFRINI / AFP)

According to research on the musical tastes of Emmental, the holey cheese changes flavour depending on the melodies played as it ripens.

The experiment — “Sonic cheese: experience between sound and gastronomy” — by Bern University of the Arts and a cheesemaker in western Switzerland probed whether the sounds and vibrations of music could impact the chemical reactions in the bacteria within cheese.

Over six months, Emmental made in Beat Wampfler’s 19th Century cellar in the town of Bergdorf were exposed to A Tribe Called Quest, Led Zeppelin or Mozart.

Other circles of the holey Swiss classic were kept away from music, serving as a control group.

“We did two surveys, a scientific one, and another with a jury of culinary experts,” said Peter Kraut, deputy director of the music department at the Bern arts university.

“My favorite cheese was that of Mozart, I like Mozart but it’s not necessarily what I listen to… maybe a sweet little classical music it does good to the cheese,” he said.

Kraut told AFP that the final step will be a biomedical survey to see if there are actual differences in the composition of the cheeses.

Wampfler, a veterinarian by day but consummate apron-wearing cheese enthusiast at night, said he was delighted the experiment worked out and saw opportunities to market cheese based on a customer’s musical taste.

“I already have people calling me asking if I have cheese with Balkan music, blues…(or) ACDC,” he said.