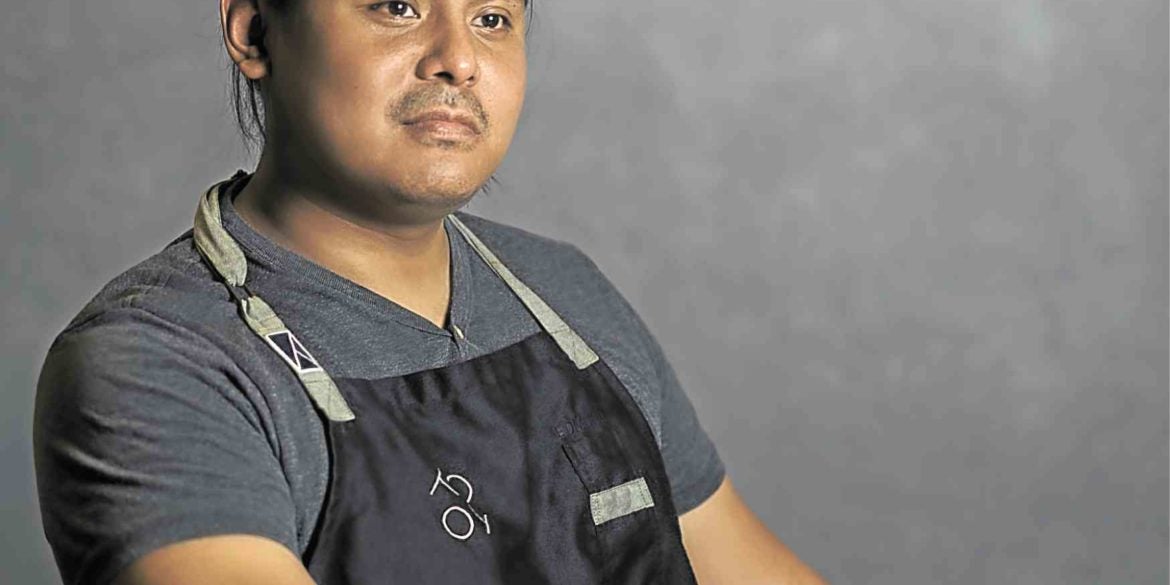 Navarra: “A lot of his dishes beginwith the thought: ‘Wouldn’t it be fun if…”

Jordy Navarra as a friend—it happens

Trying to separate the brilliant, creative chef from the affable fun guy in the kitchen doesn’t really make sense

One hot afternoon many years ago, Jordy Navarra and I were walking along a dusty row of empty spaces that had been recently gutted. Our landlord pushed open a makeshift plywood door apologetically: “Sorry it’s kinda dusty. It’s not much to look at now, but you can get a feel of the place.”

We stepped out of the sun into the darkened interiors, and waited for our eyes to adjust to the light. Jordy paced around; he walked up and down the stairs, sending slivers of wood and dust flying into the beam of light streaming in from the makeshift wall.

“It’s interesting,” was all he said. “Can I get the details?”

I’m not insinuating that I was the midwife, or even the midwife’s assistant—only that I was standing in the room when Jordy first laid eyes on the space that would one day become Toyo Eatery.

It’s like saying I was there the first time the Eraserheads rehearsed together. It’s like having walked past a table where Martin Scorsese and Robert de Niro could be just hanging out—or planning their next movie.

One thing I didn’t expect was how close we’d all become one day. In the early days of Toyo Eatery, Jordy, his wife May, my wife Lourdes and I would get together Monday nights and check out restaurants. Most of the time it was some absolute hole-in-the-wall dump with a Sichuanese hotpot or something like that.

Once we checked out this new Asian fusion place that would become Hey Handsome.

I’ve written why Jordy is a brilliant chef and one of the most creative individuals I know. This is probably the first time I’m writing about him as a friend—because, of course, we’re not supposed to do that, are we? Restaurant reviewers and chefs hanging out: what kind of sorcery is that?

But you know what; it happens. We’d decided we weren’t going to let our professions get in the way of companionship. I also promised myself that I would always be honest and call him out, which I have done always, and he’s never failed to take it on the chin.

Trying to separate Jordy Navarra, the brilliant, creative, inventive chef, from the affable fun guy in the kitchen who’s always up for a joke, doesn’t really make sense. He is the chef that he is because he’s able to bring people together, to bring people and food together, to get ingredients to come together in seriously unexpected ways. You get the feeling that a lot of his dishes begin with the thought: “Wouldn’t it be fun if…”

It isn’t steely cold precision, forcing ingredients to bend to his will like some deranged nouvelle cuisine chef. It’s a warm, organic way of creation and invention, coaxing out flavors, giving these time-honored Filipino ingredients and traditions and foodways the respect they deserve.

May, for her part, makes running a high-end restaurant look easy, from getting people out of their chairs to give way to the second seating, to making every guest who walks through the door feel like a long-lost friend.

Toyo Eatery has never been about putting Filipino food on the global map—at least to my mind. Its greatest achievement has been getting Filipinos to love their food—not in a grungy, let’s food-trip-pare way—but to consider the bibingka as the ultimate petit four, or to take the usually sad, banana ketchup-smothered tortang talong to transcendental heights. That the cuisine is recognized internationally is a proud moment, but that is incidental.

I’ve often asked Jordy and May what their plans are, and they usually give me a strange look. “We’re just going to keep on doing what we’re doing,” they said, with a shrug.

And for us, really, that’s all we need them to do. Team Toyo deserves all that they’ve reaped, and more. –CONTRIBUTED