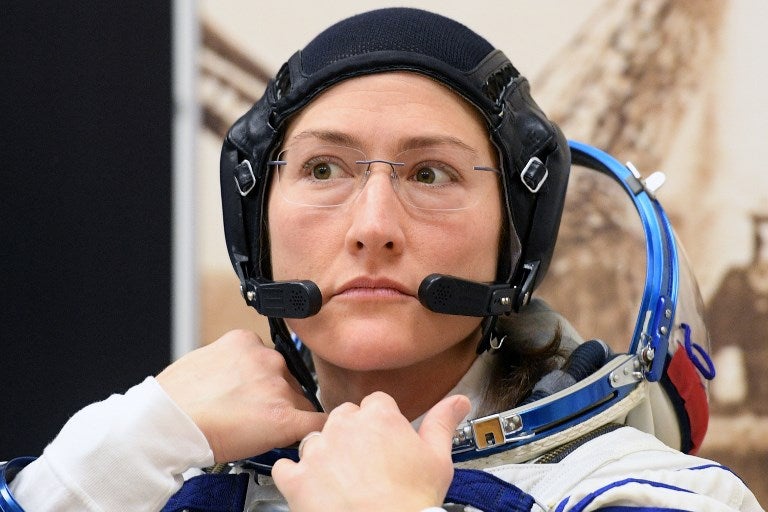 (FILES) In this file photo taken on March 14, 2019 NASA astronaut Christina Hammock Koch, a member of the International Space Station (ISS) expedition 59/60, looks on as her spacesuit is tested prior to the launch onboard the Soyuz MS-12 spacecraft from the Russian-leased Baikonur cosmodrome in Kazakhstan. - NASA responded to accusations of sexism March 27, 2019 over its decision to cancel a planned historic spacewalk by two women astronauts due to a lack of well-fitting spacesuits.On Monday, the US space agency announced that Christina Koch will perform tasks in space Friday with fellow American Nick Hague -- rather than with Anne McClain as originally planned.Had Koch and McClain done their spacewalk together, it would have been the first ever by two women astronauts -- out of more than 200 spacewalks since 1998. (Photo by Kirill KUDRYAVTSEV / AFP)

The days of astronauts packing enough clean clothes to last a whole mission could soon be over as Russia said Friday it is developing a washing machine for space.

The RKK Energiya space corporation that builds spacecraft dropped a brief mention of the innovation in a video posted on YouTube.

“By the way, for future lunar expeditions and other interplanetary crafts, RKK Energiya has started developing a special space washing machine,” the voiceover says, without giving further details.

With water at a premium, currently astronauts on the International Space Station (ISS) for stints of some six months cannot wash their clothes in any way and simply put on new outfits when their clothes get dirty.

Astronauts usually wear the same outfit for three to four days and then throw them away with other rubbish.

In 2017, a Russian space industry journal published a paper by RKK Energiya researchers with a description and diagrams of a washing machine that could be used on the ISS.

It said that for three crew members, up to 660 kilogrammes (1,450 lbs) of clothes have to be ferried to the ISS over a year.

For a two-year flight to Mars with six crew members this could increase to three tonnes, the authors warned.

Having onboard “equipment for hygienic treatment (washing) could significantly lessen the stocks of personal hygiene products and items of clothing,” the report said.

Researchers proposed using not water, which would be wasteful and require extra storage, but carbon dioxide that is produced by humans’ breathing and can be turned into a liquid under pressure.

Last year, the Moscow Institute of Chemical Machine-Building said that it was going to develop a shower and sauna for astronauts as well as facilities for them to wash hands and clothes.

NASA has also wrestled with the problem, funding research into methods of washing clothes without water and anti-microbial clothing that could be worn longer.

The announcement of the washing machine project comes as NASA this week cancelled the first ever two-women spacewalk from the ISS because there was only one spacesuit on board of the right size.