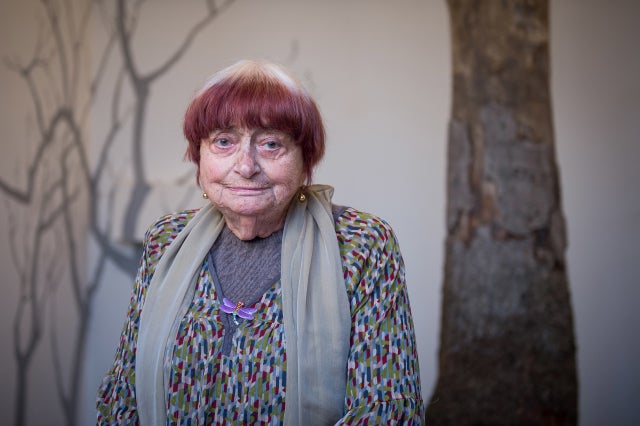 In this file photo taken on March 23, 2019 French artist Agnes Varda poses next to her installation named "La serre du bonheur", presented as part of her exhibition at the Chaumont-sur-Loire castle. Image: GUILLAUME SOUVANT / AFP

‘Dare to be sentimental’: Agnes Varda’s life in art

Up until a few days before her death on Thursday, Agnes Varda was making the final touches on three artworks to be inaugurated this weekend at the Chaumont-sur-Loire castle in central France, frail but visibly thrilled to see “art integrated with nature.”

“It’s an immense joy to be here,” she told AFP last Saturday in one of her final interviews.

The 90-year-old director used a vividly colored cane as she toured the site, often holding the hand of journalist Christian Panvert, who interviewed her for AFP.

“It was very touching,” Panvert said Friday. “She would close her eyes and was having quite a bit of trouble to catch her breath.”

The first installation of Varda’s show was a series of close-up photographs of people holding hands, the frames draped with garlands of tiny hearts carved from potatoes.

“The pictures were taken against the waxed tablecloth of my kitchen table. For three months my friends would come over and pose, one after the other,” she explained.

“Each time it was a calm and sweet moment of pleasure,” she said, before declaring: “Let’s dare to be sentimental.”

In a gallery nearby stood a tree, its gnarly roots visible in the mound of dirt on the floor, but its crown chopped off — to the delight of the black-and-white cat perched atop, surveying her surroundings.

“Nini’s Tree” evokes a similarly cut spruce tree in the courtyard of Varda’s home in Paris, where Nini the cat often took up position, Varda said.

“I prefer trees on their own to forests. What I create is not conceptual. It’s graphic, sculptural, based on a simple reality that always mixes the real and the false,” she said.

“Creating is not about day-dreaming. You start from a small dream and it becomes an artwork. At its heart that’s the definition of contemporary art.”

Varda’s third installation at the castle is its most audacious: a vast enclosure whose walls consist of unspooled reels of film from the shooting of her 1964 movie “Le Bonheur” (Happiness).

Visitors looking closely can see the transparent images of the film — 24 of them making up a single second of footage — while admiring an array of sunflowers growing in pots.

“The Greenhouse of Happiness” was created by Varda last year for a Paris gallery.

Artistic recycling was already a theme in her 2000 documentary “The Gleaners & I”, about people who comb the fields after the harvest for leftover grain and fruit, and urban gleaners who make a living from junk.

“What do we do with our trash?”, the ever-relevant Varda asked. “There has always been a way of saving what’s left over.”

Panvert said it was “the first time I was worried about seeing someone pass away while I was interviewing them.”

“She was obviously concentrating intensely on finding the right word. As if this show was a way of saying goodbye.” NVG