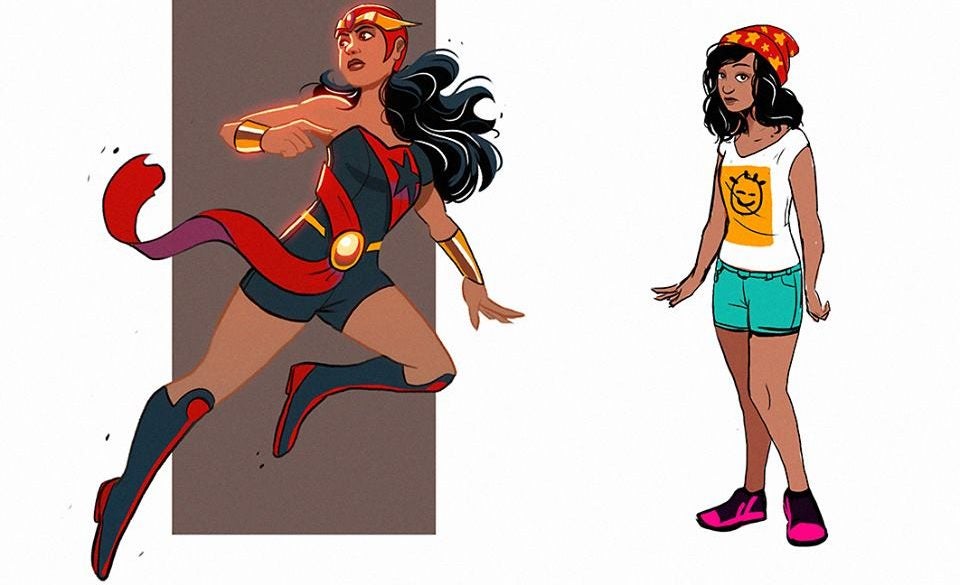 ‘Rejected’ Darna: The brown-skinned, tech-savvy heroine that could have been

Artist Jemuel Bernaldez had the rare opportunity to explore this concept when he was tapped by writer Carljoe Javier to work on a pitch for a new iteration of Mars Ravelo’s superhero Darna.

My concept for the teaser image if ever this project got greenlit. I love minimalist cover designs.

Bernaldez told INQUIRER.net that he worked on the pitch on and off for two years, as he coordinated with Javier and editor Adam David.

“When I first got on board, we were told that we don’t have to be concerned with the story on the movie and were given free rein,” he said.

Bernaldez would leave the project because of time constraints with his day job. He works as a 3D mobile lead at video game outsourcing company Studio of Secret 6 Inc. in Pasig.

He would later find out that his version of Darna would be scrapped when it was decided that the komiks should reflect the movie remake.

“I’ve heard the movie was going to be delayed and there would be rewrites. I thought I’d ask Adam if I can post those that I made on my personal site,” he said. “It was a fun look back on what the three of us did, and [made me] realize that we did really good work.”

In creating his iteration of Darna, Bernaldez drew inspiration from Marvel teen heroes Ms. Marvel and Miss America; thus, their version of Darna stands out with brown skin, wavy hair and youthful energy.

We wanted darna to have darker skin and bit of wavy hair in contrast to the original look. Marvels ms. Amerika and ms…

Darna’s physical features also shifted from her traditional curvy figure to a more athletic physique, while her skin tone was darkened.

Bernaldez revealed on Facebook that he was instructed to make the skin tone lighter when actress Liza Soberano was cast in the lead role.

More design explorations, her iteration changed to lighter complexion since the movie people want to match her to liza more…..

As for the costume, he said, “I really didn’t want her to be remembered by her bikini outfit and catchphrases. Sure [they are] iconic, but you have to admit it did lose any meaning that made her appealing in the first place.”

He dug into Darna’s history, finding an earlier version of the costume with dark red and blue tones. He also credited Adrian Alphona, who designed Ms. Marvel’s costume, for his example of a female hero’s costume that has “simplicity and functionality” while still being visually appealing.

Bernaldez managed to incorporate the flowing cloth design into multiple designs made for different storylines while making it more functional.

Reintroducing Darna into the 21st century meant equipping her with technology, social media and her own support team.

Darna would have had a trio helping with her missions: “A Grab driver to look out for street-level crime, a vlogger to keep the fan page alive and checks the news often for bigger crimes, and a cosplayer, mostly [to do] PR work and [give] moral support.”

The darna gang, functions the same way as cw’s flash support team. Only much more chaotic because they dont have a star labs and they only have the internet

In previous versions, Ding usually appeared as a much younger brother. This time, he was developed into a character that is “older and outspoken, also an activist,” Bernaldez said. Ding was illustrated with an undercut, beard, dark earrings and a paunch.

Darna also faces pressing modern-day issues in Philippine society, such as the war on drugs. She would struggle with her role as a hero, in terms of “being” versus “acting” as one and seeing issues beyond “black and white.”

“This would carry on to one of the later chapters where she meets a darker future version of herself,” said Bernaldez.

Unfortunately, the artist is doubtful his version of Darna will ever be published. “As far as I know they might still continue it, but I’m pretty sure not in the direction we really wanted.”

Creating the komiks was challenging with the time constraints of a day job and submitting work within tight deadlines.

“We had to work fast which was really not a good way to guarantee quality,” Bernaldez recalled.

Still, he looks back at the memories with fondness because of the creative process: “The best part is the collaboration and all the new unfiltered ideas we could produce.”

While Bernaldez does not always get to create komiks, in the chances that he has had, he has poured his full efforts into them. His previous work includes horror comic “Inside Edith”.

His advice to fellow artists who have their share of rejections: “Don’t stop creating, pick yourself up, improve.”

“Be kind to yourself in between those [rejections],” he said. “We may all want to work harder after every rejection but also remember to work smarter.”

He also gave words of encouragement: “You may not be the next big hit for clients, but you are always the biggest thing to the people who support you.” JB