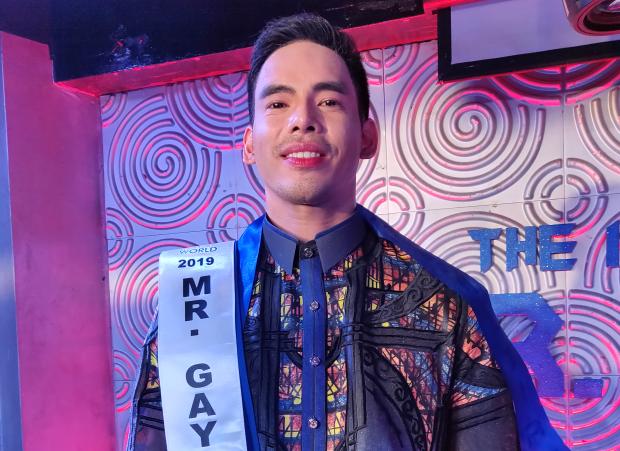 Mr. Fahrenheit Janjep Carlos will represent the Philippines in the Mr. Gay World contest in South Africa in May. (Photo by ARMIN P. ADINA / Contributor)

QUEZON CITY — Perseverance proved to be rewarding for a pageant veteran who bagged the top plum of Mr. Gay World Philippines at the Mr. Fahrenheit search.

Janjep Carlos bested 17 other aspirants for the title in the contest staged at the Fahrenheit Cafe and Fitness Center in Quezon City past midnight on Sunday.

He earned the distinction of representing the Philippines in the Mr. Gay World contest in South Africa in May.

The 41-year-old entrepreneur joined the 2016 Mr. Gay World Philippines search and finished in the Top 15.

The national title went to John Raspado, who eventually became the first Asian to bag the Mr. Gay World crown in Spain.

“He’s a friend of mine, and I personally saw how hard he worked to become a winner,” Carlos told the INQUIRER after his proclamation.

“I will also work hard and do my best to make the country proud,” he continued.

Carlos, who trades beauty products and glutathione supplements for a living, chose to speak about the mental health issues hounding members of the LGBTQI community, because of the discrimination and bullying they had been suffering.

This is the 17th edition of the Mr. Fahrenheit search, a pageant for gay men in the Philippines. Before, a separate contest for Mr. Gay World Philippines was held annually until 2016.

The national franchise for the global title went to an overseas-based Filipino for the 2018 competition.

It has now returned to entrepreneur Wilbert Tolentino, whose tenure produced Raspado and his predecessor Christian Lacsamana who finished third in the international contest. /atm