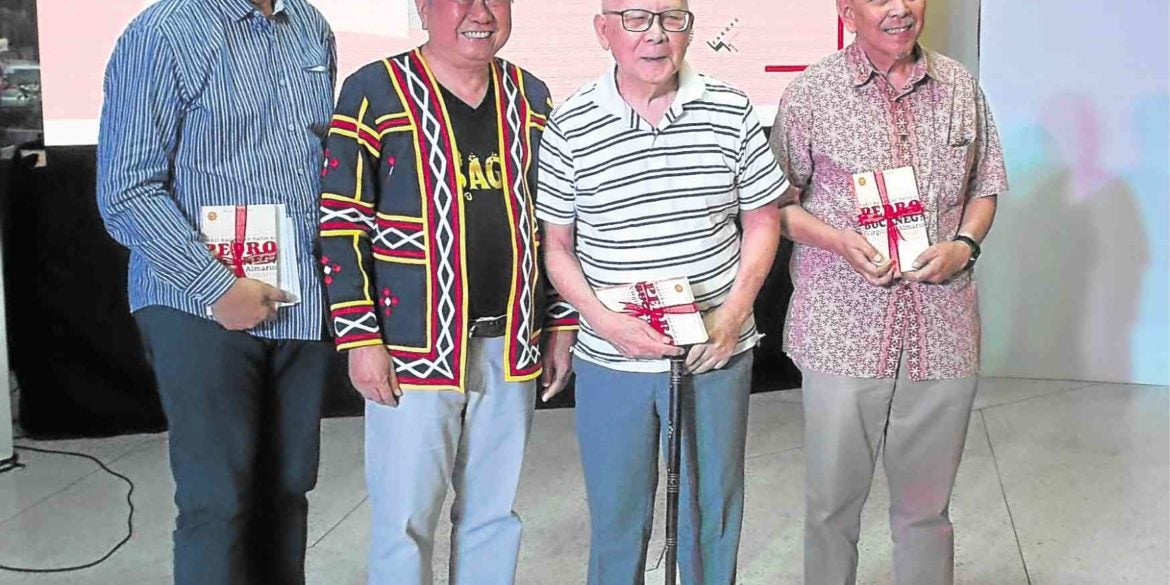 There is no plan, no systematic approach to revive our rich cultural heritage. Widespread Americanization has led to a distorted educated consciousness. Much of research is written in English. There is a lack of information about our folklore, or else the information is wrong, making it “fakelore.” We must seriously revisit folk literature to recover our unwritten national memory.

These are among the main points raised by National Artist for Literature Virgilio S. Almario in the recent launching of his book of essays “Bakit Kailangan Natin si Pedro Bucaneg?” (Why Do we Need Bucaneg) at the Vargas Museum, University of the Philippines Diliman. A big crowd attended, led by fellow National Artists F. Sionil José, Bienvenido Lumbera, Ramon B. Santos and Ryan Cayabyab. Other notables present included composer Chino Toledo.

Almario is chair of the National Commission for Culture and the Arts (NCCA) and Komisyon ng Wikang Filipino (KWP).

Bucaneg, according to legend, is the author of the Ilocano epic “Lam-Ang,” and believed to have been blind like Homer. Later, Almario said, a priest wrote a Christian heritage version of the legend and this is “not by Bucaneg.”

The book launch was enlivened by performances. Soprano Lara Maigue sang Abelardo’s “Mutya ng Pasig” and, surprisingly, an Elvis Presley song, “Can’t help Falling in Love,” a concession no doubt to Almario’s generation. Members of the UP Dance Company did a native pas de deux. Juan Miguel Severo delivered a traditional poem in Tagalog and Negativo (cq) represented the youth sector with a rap number.

Poet-performer Vim Nadera, with a lolo’s hat and all, acted out and declaimed from memory (missing some lines) “Ang Baul ni Ingkong,” a poignant long poem by Almario, which is a tribute to his grandfather Aurelio de Rueda Almario, a katipunero who stole a pistol from a Spanish officer.

Alma vs Almario
It was also Balagtasan day, with two poets engaging in a poetical joust, in the required florid, stentorian style, arguing the merits of the persona of “Rio Alma” the poet vs “Virgilio S. Almario” the scholar. Audience participation was in the agenda. Verses extolling the poet were circulated among selective members of the audience who, one by one, stood up and proclaimed support for “Rio Alma.” So poor “Virgilio S. Almario” went down in ignominious defeat.

Elucidating on his advocacy, which he observed was nothing new, Almario said our pre-Spanish culture should not be relegated to the museum (“hindi dapat ilagay sa museo”). He added: “Recovering the rich national memory will lead to a sense of nationhood. Other countries are doing this. We want our enlightened memory of the past to lead us to a heightened national identity.” —CONTRIBUTED