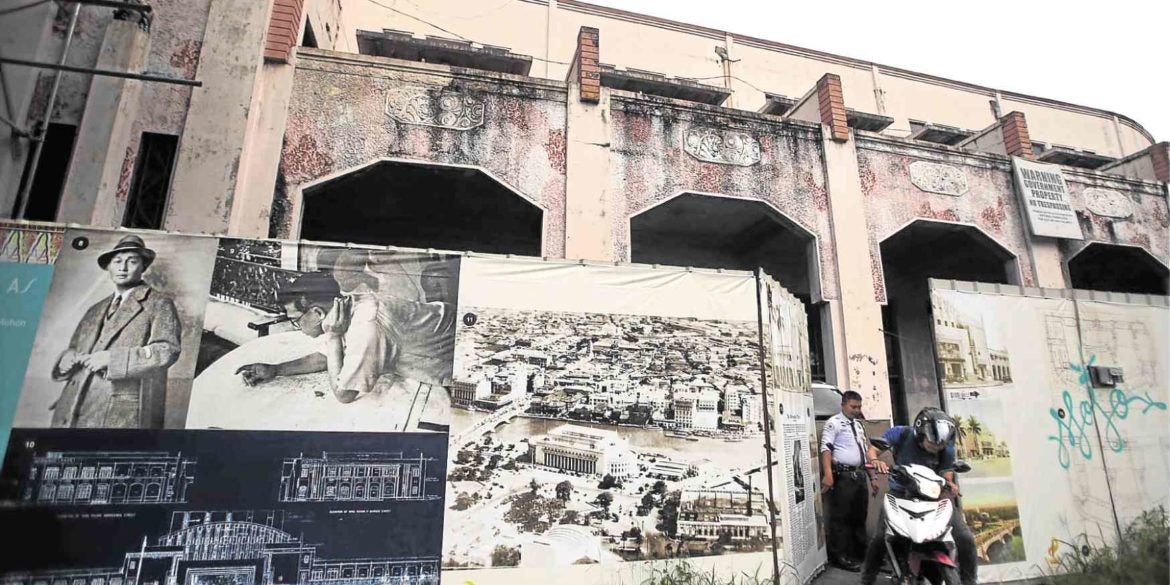 What has been billed as the biggest restoration project of a built heritage in the country could be collapsing under the weight of its own expectations and because of infighting.

The Metropolitan Theater of Manila (MET) had been languishing in obscurity since the 1990s when it was closed down due to heavy debt to the Government Service Insurance System (GSIS).

Built by architect Juan Arellano, the MET opened in 1931 and was acclaimed for its modern Art Deco elements and its shining history of hosting several acclaimed performing arts and popular culture events.

In 2015, GSIS turned over the MET to the National Commission for Culture and the Arts (NCCA).

In 2017, NCCA announced a P266.77 million project to restore the MET to its former grandeur.

But so far, barely a third of the restoration has been completed.

In June 2018, the NCCA board did not renew the services of consulting architect Gerard Lico and the Project Management Team (PMT), which NCCA executive director Rico Pableo Jr. said he formed as “checks and balances.”

Early this year, the NCCA ended the budget and services of architects and engineers of the second PMT.

Mata charged there was “collusion” between government officials and the project’s contractor, 401 Development and Construction Corporation with RR Encabo Construction, Inc.

Almario turned over the restoration project to the National Historical Commission of the Philippines (NHCP) early this year. Under the NHCP, 401 Development had done the restoration of several ancient churches in Bohol that were damaged by the 2013 earthquake.

Aside from Almario, asked to be investigated were members of the TWG: NHCP chair Rene Escalante; National Museum of the Philippines director Jeremy Barns; NCCA commissioner Fr. Harold Rentoria, OSA, who heads the NCCA Subcommission on Cultural Heritage; lawyer Lucille Karen Malilong Isberto, former head of the NCCA National Committee on Monuments and Sites; and Marichu Tellano of the NCCA secretariat.

In an interview with the Inquirer, Isberto said the complaint consisted “only of speculations.”

But just the same, she said she was looking forward to the investigation so that “governance issues” at the NCCA would be addressed.

“I welcome it (Ombudsman inquiry) and want the truth to come out,” she declared.

“I wish NCCA would run a real-time monitoring system for the MET project [since] it is good governance,” she explained, adding she would like all contracts and expenses to be posted for public viewing.

When it started in 2017, the restoration project was headed by Lico as consulting architect and Mary Rajelyn Busmente as project coordinator.

The NCCA referred to them as part of the PMT, but they denied this since, according to them, “they do not report on a daily basis and the same is stipulated in their contracts.”

They made the denial according to a summary report on what transpired in the May 2018 meeting in the NCCA between the TWG, Lico and PMT.

The contracts for Lico and his team ended in June 2018 and were not renewed. But Busmente was rehired as project coordinator.

The project is now headed by Aaron Veloso. Pableo oversees.

A document obtained by the Inquirer showed that only 15 percent of the 2017 budget was utilized, the reason the Department of Budget and Management turned down the 2018 budget appropriation of the project.

Documents also showed that the work at the MET as late as May 2018 was being done without a building permit from the Manila City Hall. Sources said that the permit had been issued just recently.

In the May 2018 report of the NCCA, it was noted that there was “no documentary evidence to ascertain the MET project’s conformity with acceptable conservation principles,” which would be needed together with project plans and major update reports, “to check on the soundness of conservation methods and materials applied.”

Isberto told the Inquirer that the TWG was often bypassed by Lico and his team and that all intervention work at the MET were not TWG-approved.

She added the PMT did not submit reports on the restoration project.

The Conservation Management Plan (CMP), done by Lico’s graduate students at the University of the Philippines, was eventually submitted to the TWG, but “lacked so much information.”

“We were not provided plans. There was no feasibility study for the use of the MET,” Isberto said.

She said she questioned the capability of “someone without conservation training as consulting architect” for the project.

The project was also hounded by different work schedules which resulted in conflicting information on the accomplishment rate of the contractor.

“Beyond the paperwork, 401 followed its self-formulated work schedule which resulted (in) conflicting computation of 401’s accomplishment report consequent to both parties’ irreconcilable expectations,” said the 2018 report, referring to the PMT as the other party.

Another problem concerned the architectural consultancy firm Schema Konsult, Inc., which failed to submit supplemental plans such as interior design, so that the contractor reportedly made its own plans.

The contractor took “risks by undertaking works not covered by variation orders (VO),” said the 2018 report. This resulted in   additions or changes to the existing scope of work.

“Even without the benefit of an approved design and appropriate variation orders, 401 implemented works affected by the removal of the blackbox and cinematheque (side wings added by Imelda Marcos when she restored the MET in the 1970s), particularly the preparatory stages toward the installation of the air-conditioning system,” the report read.

Isberto said Lico, when asked, could not produce his appointment papers.

Lico told the Inquirer that his appointment was for three years and was renewable every six months. He said he was appointed in September 2015, right after the GSIS turned over the MET to the NCCA.

He added the project had a building permit and the CMP “was done simultaneously with the plans because funds (would) revert (to the general funds) if we do not bid the project, time was of the essence.”

He explained that the CMP was done by graduate students who had “individual credentials to flaunt and are heritage professionals.” He added the plans were evaluated and “committee-approved.”

(Since Isberto said Lico had bypassed the TWG, he could be referring to the NCCA management committee under the NCCA secretariat.)

Lico said his work was to facilitate the application and provide pertinent documentary requirements and it was the contractor that was responsible for  permits.

“These issues, CMP and the others, are immaterial to these issues of alleged corruption,” he said.

the “Ombudsman investigation is overdue and should be

thorough and examine everything that transpired since NCCA bought the MET in 2015.” —CONTRIBUTED