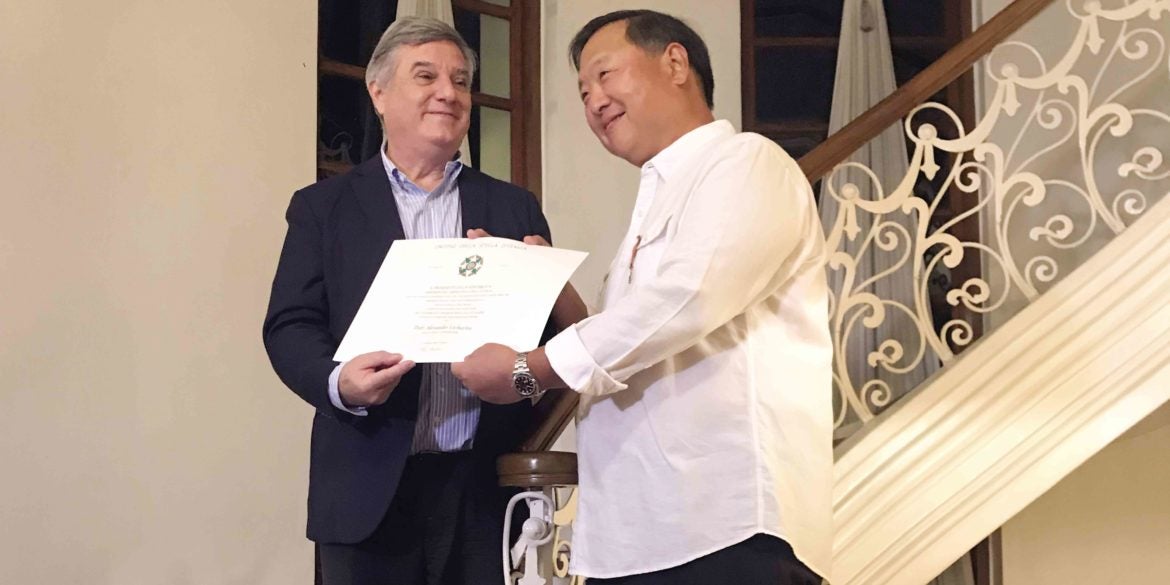 Italian Ambassador Giorgio Guglielmino hands out the citation from the Italian government to entrepreneur Alexander Lichaytoo.

Maven of Italian food and wines gets knighthood

When entrepreneur and cook Alexander Lichaytoo arrived at the residence of Italian Ambassador Giorgio Guglielmino, he was shocked to see many family members and friends who had come to witness the event.

Lichaytoo was awarded the knighthood of the Order of the Star of Italian Solidarity (Cavaliere dell’Ordine della Stella della Solidarietà Italiana), bestowed on civilians who have made outstanding contributions to raise the profile of Italy and strengthen relations with the host country.

The medal is given by the Italian president through the Italian mission. Guglielmino cited Lichaytoo for introducing some of his country’s finest brands, such as Lavazza, De Cecco, Venchi chocolates and Caputo flour, to the Philippines.

“Through his passion for quality food, accompanied with his remarkable entrepreneurial skills, Alex educated the consumers and let them experience, discover and appreciate why these products are exceptional,” said the envoy.

Lichaytoo is president and chief executive officer of Bacchus International, the wholesale company which supplies the best Italian ingredients to restaurants. He shared the award with his brother Clifford, the chief finance officer.

Their retail outlet Bacchus Epicerie is thriving at Rockwell’s Power Plant Mall in Makati, Edsa Shangri-La in Mandaluyong, and Commercenter in Alabang.

Guglielmino said he had had lunches prepared by Lichaytoo  himself.

In return for Filipino hospitality, the envoy himself had cooked a mean risotto with Prosecco.

“The Ambassador is a good cook,” Lichaytoo told Inquirer Lifestyle.

Guglielmino pointed out that Bacchus Epecerie wasn’t just a store for premium ingredients. “You feel as if you are in Italy,” he said. “The special ambience shows that the place is something more than a business.”

In his acceptance speech, Lichaytoo echoed the envoy’s comment, saying, “Bacchus is not (just) a business … it’s from the heart.”

“If you love what you’re doing, it’s no longer work,” he explained. “We carry products that we love and would like to share. Italy has captured our hearts.”

Lichaytoo learned to cook from his mother. He studied business and marketing at La Salle College, Philadelphia, and worked at Procter & Gamble, handling such food brands as Dari Creme and at Coca Cola Foods in California, managing the juice lines.

After the Edsa Revolution, Lichaytoo came home to start his own business. He ventured into exporting jeans with big accounts such as Macy’s. However, the export industry was hit  with the decline of exports from America and Europe and competition with China’s cheap labor.

Coming from a family of foodies and cooks, Lichaytoo ventured into the food business. A frequent traveler, he observed that the market lacked first-rate food products.

In 1995, he established Bacchus International with Clifford. It started with importing high-end French wines at a time when cheap wines flooded the supermarkets. Aside from promoting expensive wines, Lichaytoo taught clients proper storage which was unheard of then.

The following year, Lichaytoo organized the first wine dinner at Makati Shangri-La, in which each dish was paired with a special wine from Bordeaux, France. Bacchus International invited 100 guests who each paid P3,000 for the dinner (by today’s inflation, it would cost P5,000.) The premium wines were sold out.

“In the ’90s, the market wasn’t quality-oriented yet,” he said. Restaurateurs purchased items that were available in the groceries.

Two years later, Bacchus International hosted a dinner featuring wines from Chateau Margaux. Each of the 150 guests paid P10,000 for the dinner with the wine pairing. The wines were wiped out.

He realized that the Filipino market was getting more sophisticated.

Lichaytoo attended international food fairs, established contacts in the wine industry, who in turn, introduced him to suppliers. His network encouraged him to promote the top brands to the Philippines

Restaurants were hesitant about shifting to premium brands, thinking that higher prices would intimidate customers. Lichaytoo reasoned that even if the bill was high, customers know that they were getting value for their money.

Meanwhile, Forés was opening her first casual dining restaurant, Cibo at Glorietta, in 1997. Having immersed herself in Italian cuisine, she needed a supplier who could provide the best ingredients.

Lichaytoo has been providing majority of her ingredients from the start. “We share the same philosophy that 50 percent of the success of the cooking comes from excellent ingredients,” he said.

“At the end of the day, the big accounts are modest,” he said. “There are hundreds of small restaurants that support us. That’s a bigger base. The volume of orders enables us to lower the shipping costs and our prices.”

When Guglielmino arrived in Manila in 2017, Forés introduced him to Lichaytoo. She was the first to receive the knighthood in Guglielmino’s term.

“Italian cuisine is booming in Manila,” said Lichatyoo. “Italian restaurants open nearly every month. We provide the training for the people and bring in chefs. Since we sell ingredients, we teach our clients how to use them properly and in the most authentic way.” —CONTRIBUTED