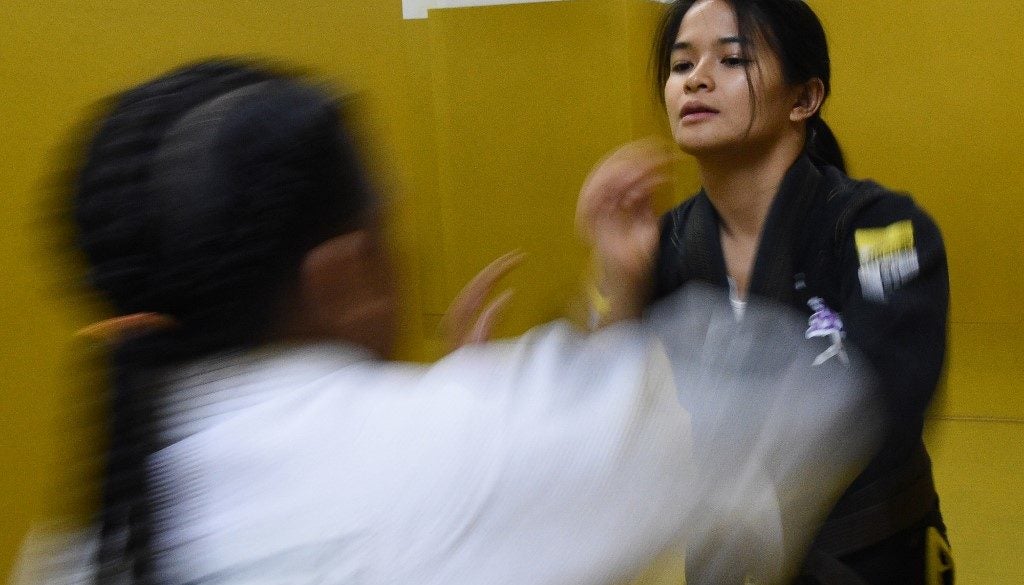 This photo taken on April 2, 2019 shows jiu-jitsu world champion Meggie Ochoa (R) sparring with a young opponent during a session at a gym in Manila. - Filipina martial arts star Meggie Ochoa is teaching self-defence to victims of sexual abuse in a bid to give them tools to better recover from such trauma, but also to better protect themselves in the future. In just two years, she has taught hundreds of sex abuse survivors, many of them poor and abandoned. (Photo by TED ALJIBE / AFP) / To go with AFP story Philippines-children-abuse-jiujitsu,Feature by Ayee Macaraig

MANILA, Philippines — Abandoned and sexually abused as a young girl, Angelica, like thousands of minors in the Philippines — a global blackspot for child abuse — struggled to cope with the horrors of her past, but a new campaign run by a sporting champion is giving her and other survivors fresh hope.

Filipina martial arts star Meggie Ochoa is teaching self-defense to victims of sexual abuse in a bid to give them tools to better recover from such trauma, but also to better protect themselves in the future.

Children’s charities have branded the Philippines a key hub for both the live-streaming of child sex abuse and for sex tourism, estimating that 60,000-100,000 children are involved in prostitution rings.

“Some of the kids that I’ve gotten to know… they saw themselves as worthless because of what they experienced. For me that’s so heartbreaking,” the jiu-jitsu world champion told AFP of her decision to launch advocacy campaign Fight to Protect.

In just two years, she has taught hundreds of sex abuse survivors. She offers two courses — one for those who wish to learn the sport, and another focused purely on self-defense.

“Jiu-jitsu taught me to be disciplined, confident and to face my fears,” Angelica, now aged 15, told AFP.

“I can face the problems I encountered before and I am now comfortable interacting with people,” she added.

Poverty in a nation where tens of millions get by on less than $2 per day, as well as increased internet access and fluency in English, make the Philippines vulnerable to both online and real-world sexual predators.

“Easy access to the web and money transfer services make the country a global hotspot for this problem,” said IJM, noting that it is often parents or family members that organize or even commit the abuse.

Children’s charity Terre des Hommes drew attention to the problem using a computer-generated girl nicknamed “Sweetie” that hung out in chatrooms and was approached by about 20,000 people — mostly men — in a matter of weeks.

“It’s just horrible, not just sexual exploitation but also sexual abuse which is happening in the homes of many Filipino children. I was just so bothered,” Ochoa explained.

“There’s so much that can be done. The sport actually gave me a voice,” the 28-year-old added.

Competing in a relatively new sport for her basketball-mad country, Ochoa made history as the first Filipino to win a gold medal at the Jiu-Jitsu International Federation World Championships in Sweden last year.

She is also a three-time world champion in another federation and a bronze medalist at the 2018 Asian Games.

A figure of national sporting pride, Ochoa realised she could use her success to help others after reading about Karla Jacinto, a young Mexican girl who estimated she was raped 43,200 times.

She was horrified to find there were likely many victims in the Philippines too.

“Somehow part of me felt guilt,” Ochoa explained, adding: “I’m doing jiu-jitsu. I am pursuing my dream and yet this is happening.”

Critics have long seen possible pitfalls of teaching self-defense to those who have been abused, including the risk of re-traumatizing victims by exposing them to close bodily contact.

But similar initiatives around the world in recent years have won plaudits, including one by American Olympic judo athlete Kayla Harrison, herself a victim of abuse by her coach.

Taekwondo black belt Lina Khalifeh, a Jordanian, has taught self-defense to thousands of women. Her work prompted a 2015 invite to the White House from then-US president Barack Obama.

Ochoa says jiu-jitsu can help abuse survivors because it is a discipline where technique trumps size, noting her “five feet small” frame is effective even against much larger opponents.

Also, the grappling aspect of the sport helps the act of touching another person feel normal again.

“For somebody that has gone through that kind of trauma specifically, it makes you more comfortable with the right kind of contact… Contact that is not abusive,” she said.

One of the most devastating and long-term impacts of sexual abuse is the destruction of victims’ self-worth, which can be a barrier for them taking on risks or challenges.

She has seen it first-hand with her students, especially one girl who has thrown herself into training and then competition.

Ochoa said.”When she competed, the heart is there. She wouldn’t give up. But what struck me is even after she would lose, she would say ‘It feels so good to fight.’” /cbb