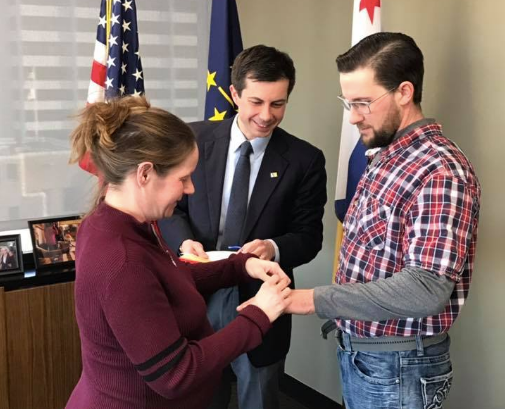 A couple from Indiana, United States got married 45 minutes before their scheduled cesarean section, officiated — and narrated — by none other than the city mayor.

South Bend Mayor Pete Buttigieg took to his official Facebook account on Monday, April 1 where he told the story of the couple’s union. Buttigieg said he ran into the young couple while on his way to use the restroom, who then told him he was just the person they were looking for.

“[I] tried to hint that I did not have a lot of time for unplanned meetings,” he said. “Reluctantly, I showed them in to the front part of our office and promised someone would try to take care of whatever their issue was.”

I never would have guessed how this morning would begin for me. Unstructured time is rare especially these days, but I…

The couple, Mary and Gabe, however, had no time to lose and explained to Buttigieg their situation.

“Mary and Gabe explained that she was on her way to the hospital for a 9:00 a.m. appointment for a c-section. And they were hoping they could be married before she delivered. (It must have been 8:15 or so),” he added.

Upon realizing they only had less than an hour to get the wedding going, Buttigieg said he corralled some staff members into the office to serve as witnesses.

“Their rings weren’t ready, so one of my colleagues found a ribbon that would do the trick,” he said. “A few minutes later, Gabe and Mary, newly married, left my office with just enough time to get to the hospital.”

Everything went as planned, as per Buttigieg, as hours later, he was sent of a photo of the couple’s baby girl, Jade Katherine Jones.

“A few moments ago, they sent Mark in my office this photo of Gabe with young Jade Katherine Jones, South Bend’s newest resident,” he said. “Congratulations to the newlyweds and new parents, and welcome, Jade, to this unlikely and lovely world!” JB