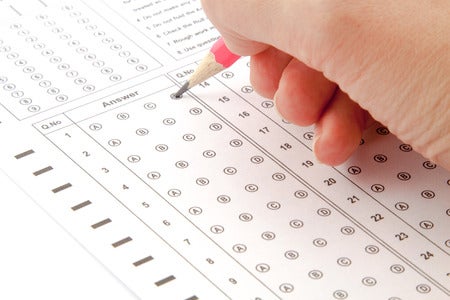 Year in and year out, students undergo the stress of preparing and taking college entrance exams.

It then takes months of anticipation and waiting until results are released: one of the final steps before a student can get into his or her dream school. Sadly, not every attempt comes into fruition, given the limited slots each university has.

One student shared with INQUIRER.net how she found the positive side of “failing” the University of the Philippines college admissions test (UPCAT).

Francheska Bal, a senior high schooler at De La Salle University (DLSU) Manila, recalled on Twitter last Monday, April 1 how heartbroken she was over not making it to UP Manila.

“Broke down in front of my mom this morning because I failed UP,” she wrote. “She spent more than P12K for a review center and camped overnight sa (at) UP just to get me a permit only to smile at me and say, ‘Bat ka umiiyak? Ang galing mo na nga eh (Why are you crying? You’re doing so great).’”

Broke down in front of my mom this morning because I failed UP. She spent more than 12k for a review center and camped overnight sa UP just to get me a permit only to smile at me and say,"Bat ka umiiyak? Ang galing mo na nga eh." AND THIS WOMAN POSTED PA SA FB ARGH i love her 😢 pic.twitter.com/NPDvKLqD5W

She shared a screenshot of her mom’s Facebook post, where her mom Roxan Rogado-Bal said she was still proud of her.

“I found it quite embarrassing and cheesy but then I realized how brave she was for doing it,” she told INQUIRER.net. “It’s like she was saying ‘Hey, my daughter isn’t perfect. But I’m happy.’”

Bal took a STEM track in senior high school and wanted to get into UP Manila’s Biochemistry program as a pre-med course so she could fulfill her dream of becoming a doctor.

She said she wanted to get into UP Manila because of its prestige and the free tuition, to help with her family’s expenses.

Bal said her mom had insisted that she study in La Salle for high school because “she wanted what’s best for me” despite the cost of tuition.

“For the longest time, I’ve always felt bad because of the expenses my parents have just so I can study. It’s really expensive if I choose to pursue my studies in DLSU,” she said.

She recalled that her mom sought a pricy review center to help her prepare for the exam. “I was really against it but my mom really wanted me to get into UP,” she said, noting that she spent her summer break being up since 5 a.m. and being home by 3 p.m. four days a week reviewing.

It was also her mom who filed her application with the tight deadline. Her mom braved the crowds of parents and students who needed a slot for the exam last July.

Not the end of the world

Bal found out about the results early on Monday morning while preparing to defend her thesis.

“At first I didn’t feel anything heavy but then my mom’s face came into my mind. I then recalled all her efforts and then I knew that I couldn’t face her,” she said.

She opted to text her mom because she felt it would be “less painful.” Her mom texted back, ”Okay lang yan, mas maraming may deserve nun (It’s OK, others deserve it more).”

“Facing my mom when I got home was the hardest part,” she said. “I looked at her and I just started crying so hard but all she did was give me a soft smile and she said, ‘Ba’t ka umiiyak? Okay na nga yun eh. Ang galing mo sobra nakapasa ka pa nga ng DOST eh.’” (Why are you crying? That’s OK. You did so great, you even passed the DOST scholarship.)

She said she wanted to tell her mom the following: “I just want to say thank you for being the most loving person in my life. I would do anything for you and someday I will get you all the things you’ve always wanted when I become successful.”

To others who did not pass the entrance test, she said, “It isn’t the end of the world… The UPCAT doesn’t fully measure how successful you can be in the future.”

She added, “God knows what He’s doing and He doesn’t see you growing in UP that’s why He’s going to place you somewhere else where He knows you’re going to prosper.” JB

Upcat: A test of momhood, too