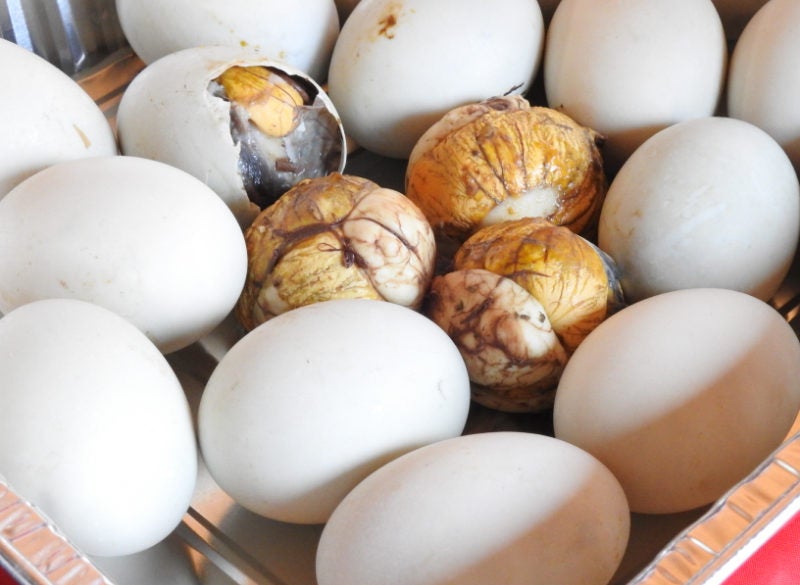 Pateros sells the highest quality and cheapest balut at P13 to P15 a piece. Photo courtesy of Department of Tourism

MANILA, Philippines — The Department of Tourism (DOT) and the municipal government of  Pateros have joined hands to fortify the promotion of balut as one of the country’s official culinary tourism products.

“Tourism is all about experience. We want the people to experience something authentic so this is it – the balut of Pateros,” said DOT-National Capital Region (NCR) Officer-in-Charge Cathy Agustin in a statement on Thursday.

“We want to push the promotion of balut as a community business livelihood and a culinary tourism product,” she added.

In an effort to revitalize the balut-making industry, DOT said “a Pateros Balut sa Puti Commission will be formed as the responsible body to promote, supervise, move, and sustain revival projects for the industry.”

“We may not be known for tourist spots, but it is our balut that makes Pateros stand out,” he added.

DOT-NCR would push “for the promotion of the balut and itik or dark-colored duck species specialty dishes as a staple menu in restaurants, local eateries, and catering services.”

Also, DOT-NCR would publish a culinary portfolio featuring the best food finds in every city and municipality in the metropolitan region with balut as the banner cuisine for Pateros.

“We may have lost the duck raising industry, but the balut making here in Pateros has been continuous,” Pateros Mayor Ike Ponce said.

“And we are currently very active in the revival program of our balut industry. I believe that in a year or two, balut will be the main industry of the municipality again,” he added.