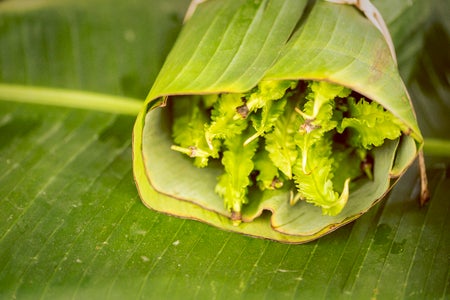 After Thailand, some Vietnamese supermarkets have ditched the plastic and turned to banana leaves to wrap their vegetables.

Tiem Rau Cut Ba, which literally translates to “Dad’s Vegetable Store,” in Binh Thanh District made the switch to banana leaves to protect the environment, as per the newspaper Tuoi Tre last March 28.

Its owner, 28-year-old Nguyen Anh Thao, quit his job at a company to build his own business by sourcing produce. His vegetables, as per the report, come from organic farms that have quality certification.

“The banana leaf packaging looks nice and pleasant so my customers are really fond of them,” Thao was quoted as saying. “They are meant to protect the environment as well.”

Apart from using banana leaves to minimize the use of plastic, Thao plans to offer discounts to customers in the future to encourage them to buy more environment-friendly products.

But it isn’t just Thao who has made the big change. Supermarket Lotte Mart in Ho Chi Minh City has also been experimenting with banana leaves to wrap itsvegetables, as well as using food boxes made with sugarcane waste, as per online news site VnExpress last April 3. Saigon Co.op and the Big C supermarket chain have followed suit as well.

Shoppers were pleased with the supermarkets’ initiative and have since expressed their support.

“When I see vegetables wrapped in these beautiful banana leaves, I’m more willing to buy in large quantities,” Hoa, a District 7 resident, said in the report. “I think this initiative will help locals be more aware of protecting the environment.”

Vietnam, along with the Philippines and Thailand, was listed by Greenpeace as one of the world’s biggest ocean plastic polluters.

In the case of the Philippines, the daily plastic waste amounts to 163 million sachets and 3 million diapers. This finding was reported in a study by the Global Alliance for Incinerator Alternatives (Gaia) last March and recommended that the Philippine government and manufacturers regulate the production of single-use plastics and look for alternative means of packaging products.  Cody Cepeda /ra