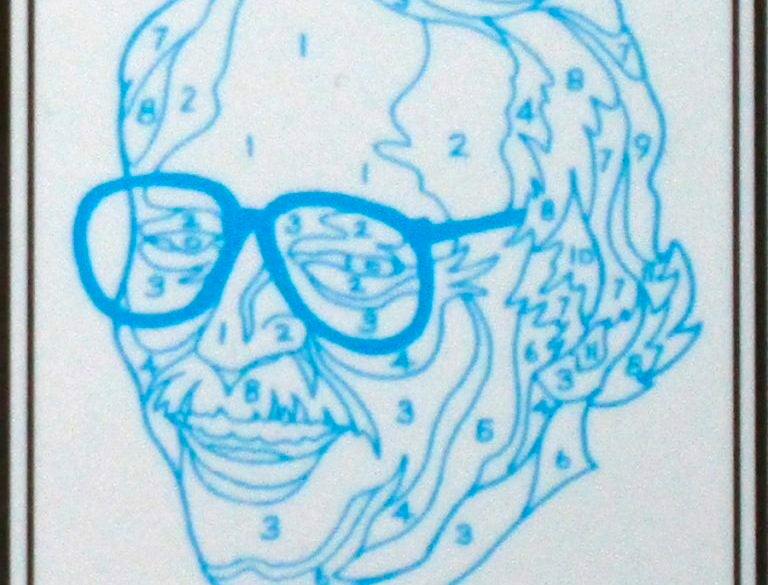 This image provided by Larry Robbins shows a numbered outline of a self portrait of Dan Robbins. Family members say Robbins, an artist who created the first paint-by-numbers pictures and helped turn the kits into an American sensation during the 1950s has died. Dan Robbins' son says his father died Monday, April 1, 2019 in Sylvania, Ohio. He was 93. Image: Larry Robbins via AP

Dan Robbins, an artist who created the first paint-by-numbers pictures and helped turn the kits into an American sensation during the 1950s, has died. He was 93.

Robbins, whose works were dismissed by some critics but later celebrated by the Smithsonian Institution’sNational Museum of American History, died Monday in Sylvania, Ohio, said his son, Larry Robbins.

He had been in good health until a series of falls in recent months, his son said.

Robbins was working as a package designer for the Palmer Paint Company in Detroit when he came up with the idea for paint-by-numbers in the late 1940s. He said his inspiration came from Leonardo da Vinci.

“I remembered hearing that Leonardo used numbered background patterns for his students and apprentices, and I decided to try something like that,” Robbins said in 2004.

He showed his first attempt — an abstract still life — to his boss, Max Klein, who promptly told Robbins he hated it.

But Klein saw potential with the overall concept and told Robbins to come up with something people would want to paint. The first versions were of landscapes, and then he branched out to horses, puppies and kittens.

“I did the first 30 or 35 subjects myself, then I started farming them out to other artists,” said Robbins, who mainly stuck to landscapes.

While the Craft Master paint-by-numbers kits weren’t embraced initially, sales quickly took off and peaked at 20 million in 1955. Within a few years, though, the market was flooded, sales dropped and Klein sold the company.

Together, Robbins helped create slices of Americana that are still collected and are found framed in homes across the nation. Palmer still sells at least two kits: one remembering the Sept. 11 attacks and the other depicting the Last Supper.

“We like to think dad was one of the most exhibited artists in the world,” said Larry Robbins. “He enjoyed hearing from everyday people. He had a whole box of fan letters.”

He noted his father’s accomplishments are still on display at the Detroit Historical Museum, “right down from Henry Ford,” his son said.

Robbins, who spent much of his life in the Detroit area, was modest about his work and didn’t get too bothered by those who mocked the paintings.

Critics came to view the paint-by-numbers kits as a metaphor for a commercialized, cookie-cutter culture and fretted that they far outnumbered the original works of art hanging in American homes, said William Lawrence Bird Jr., curator of the 2001 exhibition at the National Museum of American History.

Some within the museum questioned the idea of celebrating the paint-by-numbers craze and its impact on art, at least until the crowds showed up, Bird said.

“He would say, ‘I didn’t think of this, Leonardo did,'” Bird said. “He was amused that people were collecting them.”

When his paint-by-numbers days were over, Robbins continued to work in product development, including designing Happy Meal toys for McDonald’s, Bird said.

Robbins, who wrote a book, “Whatever Happened to Paint-by-Numbers”, said at the exhibition’s April 2001 opening in Washington that his creation survived despite the critics.

“I never claim that painting by number is art,” he said. “But it is the experience of art, and it brings that experience to the individual who would normally not pick up a brush, not dip it in paint. That’s what it does.”

Robbins is survived by his wife, Estelle, sons Michael and Larry, and several grandchildren and great-grandchildren. CC