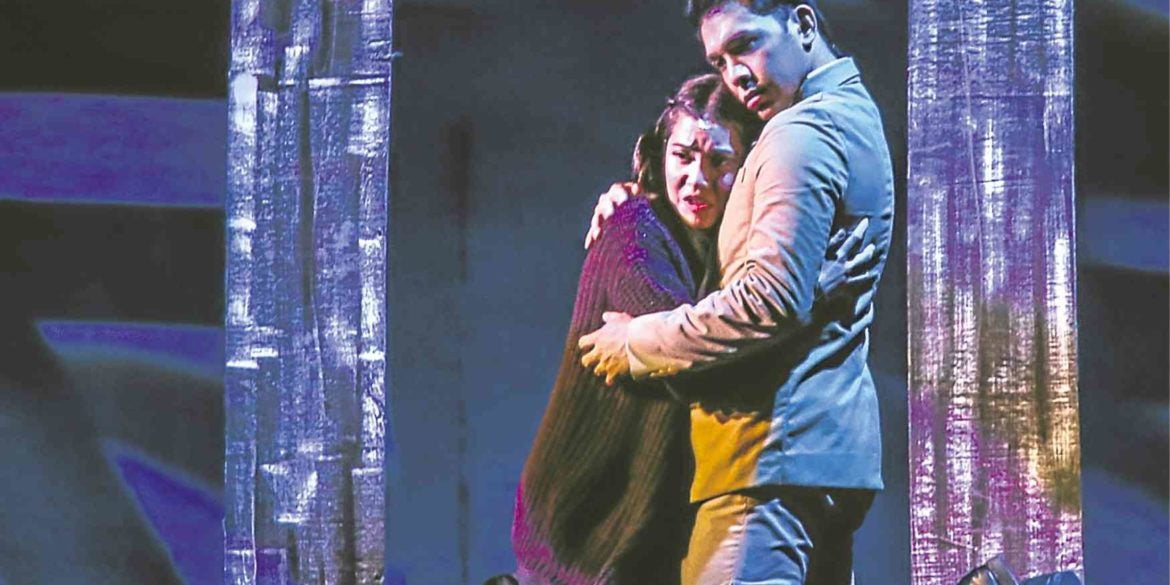 You almost forget that this is just a school-based production

The Tony and Olivier Award-winning “Spring Awakening,” with music by Duncan Sheik and libretto by Steven Sater, is billed as a “rock musical.”

You wouldn’t readily know that, however, from director Missy Maramara’s revelatory and lucidly mounted production of Ateneo Blue Repertory, six years after the university company’s initial shot at the musical.

Set in 19th-century Germany but employing modern, occasionally formal English, “Spring Awakening” revolves around a group of youngsters coming to terms with sexuality in an archaic, repressive society.

The songs, written in the tongue of hormonal adolescents, function as literal outlets for the characters—as audiovisual manifestations of pent-up pubertal rage.

But Maramara (codirecting with Darrell Uy) sidesteps the apparent temptation to turn the musical into a rock concert of sorts. Instead, she has shaped an illuminating “Spring Awakening,” whose interests lie less in the juvenile rebellion at hand, and more in the whys and hows that sculpt this rebellion. Less in the turbulent hormones, and more in the deep-seated anxiety spawned by coming of age under iron fists.

Ejay Yatco’s musical direction, for instance, allows little room for roof-rattling belting. He substitutes vocal gymnastics with what sounds like unsullied yearning, an unexplainable bodily hunger put to melody. And more than subtly tweaking parts of the score to marvelous, dramatic effect, he has also whipped into shape the finest ensemble singing by any Filipino university theater company in at least the last decade.

Mica Fajardo’s choreography reflects this naivety. The dancing here is a little raw, a little clumsy, but vibrant in the way that fresh, unschooled things are.

It’s all in contrast to the design elements—Ohm David’s set of ominous, “ruined” wooden panels, Miyo Sta. Maria’s lighting and the costumes by Gayle Mendiola and Leika Golez—collectively conjuring this frigid, unforgiving landscape.

But it isn’t just the overall picture that reveals this production’s grasp of its material. It’s also in the little things, How, for example, the blocking insists on always placing upstage, or even on just a slightly raised level, the actors playing the adult characters in the musical (the male parts effectively granted varying degrees of coldness by Angelo Esperanzate).

Or how “The Word of Your Body”—in which the eventual teenage lovers, Melchior and Wendla, try to make sense of this confusing, deepening attraction between them—is staged like some kind of mating ritual dance.

The lovers, by the way, are portrayed by professional actors Sandino Martin and Krystal Kane, respectively—both giving performances with astute command of feeling and character. (In Kane’s case, her name is prescient: She acts and sings with a level of crispness and transparency that instantly elevates her to the ranks of the pros.)

The two other notable featured parts are handled by Juancho Gabriel, an electric bundle of nerves and confusion as the tragic Moritz; and Alexa Prats, who delivers a whirlwind performance of astonishing range in her two key scenes as the outcast Ilse.

By the time this production comes around to staging the musical’s biggest number—the aptly titled “Totally F*cked,” where Melchior arrives at the epiphany that, in his particular world and time, there’s no defeating the powers that be—the release is both well-earned and satisfying, performed with a self-aware snigger at the tragic turn of events.

In this exhilarating number—and in many others in this show—you almost forget that this is just a school-based production. Alongside Dulaang UP’s “Ang Nawalang Kapatid” and Tanghalang Ateneo’s “Middle Finger” and “Kalantiaw,” this “Spring Awakening” sets the bar really high to show what mere campus theater can truly achieve. —CONTRIBUTED

“Spring Awakening” runs until April 14 at Hyundai Hall, Areté, Ateneo de Manila University, with performances Wednesday-Friday at 8 p.m. and Saturday-Sunday at 3 p.m. and 7 p.m. Ian Pangilinan, Erika Rafael and Jason Tan Liwag are the alternates for Melchior, Wendla and Moritz, respectively. For tickets, contact Pia at 09267145057 or Isagani at 09177906739, or visit tinyurl.com/SpringblueREP2019