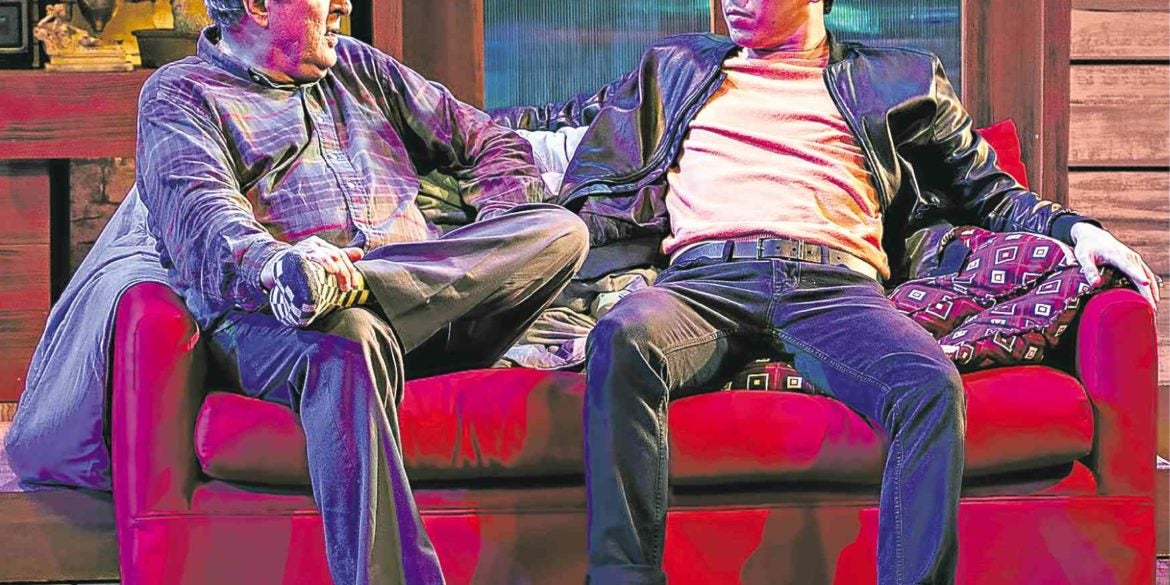 Stock sitcom figures, sure, but done with panache

A glowering, divorced curmudgeon bent on affirming his solitary lifestyle. His remarried ex-wife wrestling with second thoughts. Their cheeky son with the dual agenda of repairing one marriage and enabling another (his own).

Throw them all together on a cold winter evening, and you have Eric Chappell’s “Father’s Day,” written in the perfect, time-honored recipe of a 1980s sitcom.

No great surprise there, given that Chappell was one of Britain’s top comedy-for-television writers of that period. And, going by memories of laugh trips over the years, “Father’s Day” is just the kind of lighthearted fare that Repertory Philippines (Rep) can dish out stylishly with its eyes half-closed.

Lightheaded, a dour aficionado of Bertolt Brecht and Arthur Miller may grouse.

Where’s the woke awareness of gender disparities, looming fascism and climate doomsday plaguing our world? Why use up two hours of precious time on repartee-a-minute and coy innuendoes leading to obligatory affirmations of love and values at the end?

Why, indeed? Perhaps precisely because there has to be a side to life—and theater—that can afford moments of healthy respite before we all go back to coping with the moral and emotional stresses of the real world.

And if that is what one is looking forward to in an evening, Rep’s “Father’s Day” delivers—for the most part. Especially in the first act, the off-the-cuff laugh-out-loud moments come thick and fast, and only the most irredeemable Brechtian will escape a guffaw (or at least a chuckle).

Inevitably, unremitting entertainment of that kind tends to pall, and in the second act, occasional slippage into both sententiousness and histrionics, and contrived resolutions, lower the freshness factor.

While there are nods to genuine family feeling and noble self-giving, the play does not really manage a more thoughtful level that one finds in, say, Neil Simon comedies.

But this is trademark Rep territory, and one may simply sit back and enjoy it all—from the tastefully elegant sets, to the brisk direction of Baby Barredo, to the appealing familiarity of strong character performances by Miguel Faustmann as Henry Willow, drawing on his inner Scrooge, and Liesl Batucan as his ex-wife, effortlessly running the gamut from pouting intruder to sly enticer to warm maternal figure.

Stock sitcom figures, sure, but done with panache.

Andres Borromeo as the son Matthew is still getting the hang of consistency but already promises to be a charmer in the theater scene.

All in all, whatever snags in tone or plausibility, “Father’s Day” can only come across as a fun evening—for the audience as for the Willows. —CONTRIBUTED

“Father’s Day” runs until April 14 at Onstage Theater, Greenbelt 1, Makati City, with performances on Friday-Saturday at 8 p.m. and Saturday-Sunday at 3:30 p.m. Call Ticketworld at 8919999 or visit ticketworld.com.ph.