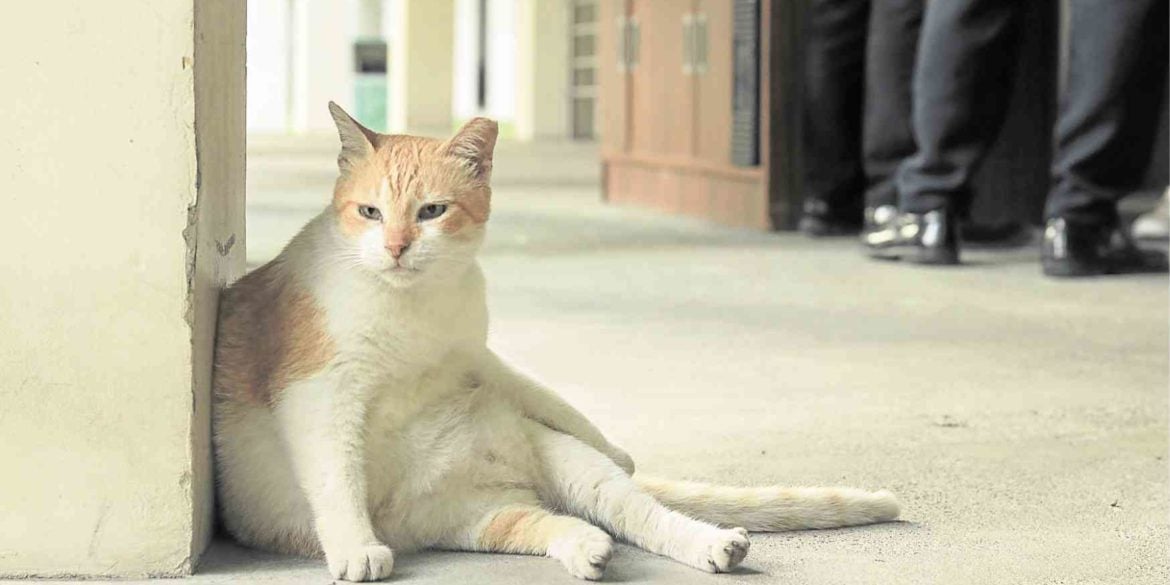 Archer in one of his favorite spots —PHOTO BY TRIA CASAS

In 2013, students and staff of De La Salle University (DLSU), who were unable to secure tickets for Game 3 of the UAAP Men’s Basketball finals, still witnessed history as the Green Archers beat the University of Santo Tomas’ Growling Tigers for the much-coveted championship title.

Placed in the middle of the Henry Sy Sr. grounds was a screen that played a livestream of the game.

What started as a small gathering near the screen grew into a crowd of hundreds showing their support, cheering and chanting.

If sports could unite a student body, so could a famous feline in the very same venue, six years later.

Lasallians and non-Lasallians alike showed love and support for Archer, the orange-and-white tabby and resident of the DLSU Taft campus who took the internet by storm when he had his honorary “graduation ceremony.” Yes, for a cat!

Named after the university mascot, Archer was born mid-2013, a few months before the Green Archers won the UAAP men’s basketball championship. This explains the ID number on his alumni card. (At DLSU, the first two or three numbers of a student’s ID represent the year he or she enrolled.)

Hanging out mostly in the Henry Sy Sr. grounds, Archer, with dozens of other cats, is a familiar sight to students.

Samantha Ramos, who graduated from DLSU last year, “used to hate cats,” but their presence eventually grew on her.

She recalled: “When Archer became the most popular among the cats in school, I attempted to ‘get close’ to him. I sat on my heel by the Henry Sy Sr. gate and called him over. He surprisingly walked over to me, so it gave me a reason to try and pet him… but then he tried to scratch me.

“After that, I kind of just greeted him whenever I saw him and passed by him. He let me sit next to him on a bench once, though, so I guess I was already forgiven.”

Jamie Juantong would catch Archer sunbathing or sleeping on a bench. “Sometimes, when I have time, I sit beside him and just watch. It was fascinating,” said the double-degree major. “He often had a bow on for some reason and he walked with intent. I’ll miss seeing him every day.”

Archer has encountered strangers, too, as DLSU hosts activities open to guests and outsiders.

“For my academic recognition day, Archer scratched my dad,” alumna Justine Lubag said. “My dad’s an alumnus and hasn’t visited in years, so naturally, Archer ‘welcomed’ him,” she explained with a laugh.

“He almost missed walking me to the stage because the nurse insisted he take the ambulance to the hospital to get treated. But my dad was fine and just got the scratch cleaned.”

Archer’s graduation from the DLSU is due to a condition in his liver that has unfortunately worsened. DLSU-Pusa (Professors for the Upliftment of Society’s Animals), under the Office of the Vice President for Lasallian Mission, decided that it was time Archer received better care under Ate Jenny, a former security guard of DLSU.

A special send-off was proposed for Archer, a graduation of sorts to “humor ourselves and lessen the heartbreak,” said Pusa cofounder and Philosophy professor Laureen Velasco.

Held on March 27, the graduation was well received and supported by Lasallians and non-Lasallians alike, and shared many times over on social media.

The event included remarks by Velasco, tributes by the students and a graduation “march.” Merchandise was also available to help fund Archer’s medical and transportation fees.

The DLSU Alumni Association even presented Archer with a lifetime alumni card.

“We did not expect it would be this big, especially the coverage by various news agencies. But I knew he deserved it, if only for the reason that we are making history,” said Velasco.

“Many offices had to be mobilized for a cat’s graduation. Much ado about a cat!” she quipped. —CONTRIBUTED