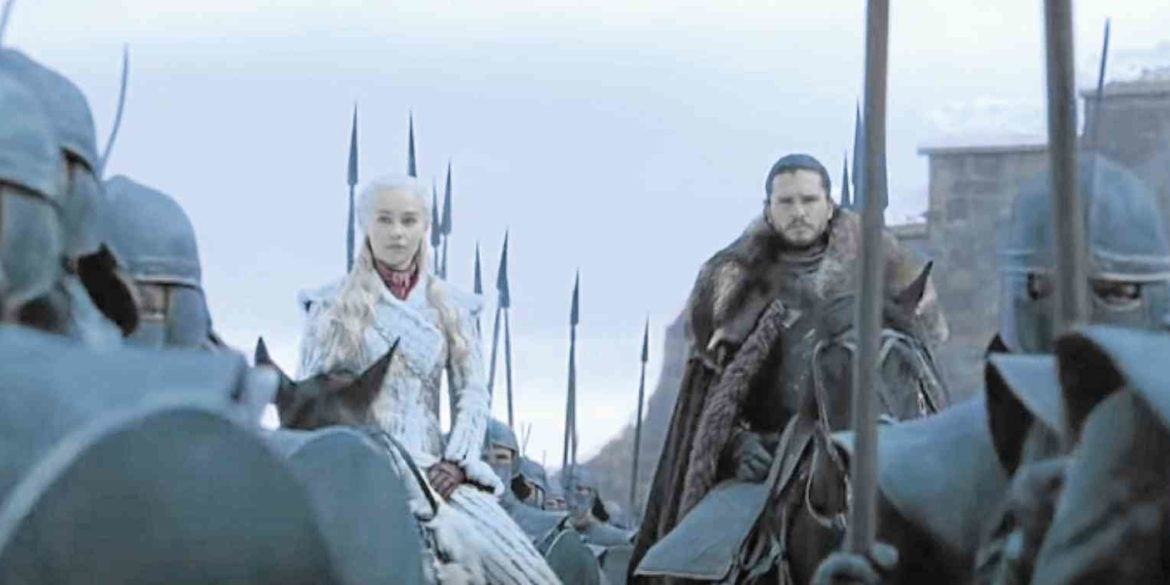 The Super guide to ‘Game of Thrones’

It’s impossible to imagine a world without “Game of Thrones.” On April 17, 2011, HBO aired the first episode of the TV show that would change TV. By the end of that 10-episode first season, the world was hooked. And so much more was to come.

George R.R. Martin’s “A Song of Ice and Fire”  had long been a best-selling fan favorite series when the first novel—1996’s “A Game of Thrones”—flew unto bookstore shelves. Martin’s potent brew of fantasy tropes and real-world politics stood out.

But it was the HBO miniseries, masterminded by David Benioff and D.B. Weiss, that entranced millions. The duo, now nicknamed D&D, tinkered with the book and added elements of their own for the larger audience. “GOT” began by killing off its main character and never looked back from there. Each of its seven seasons shocked and mesmerized audiences. It turned actors Emilia Clarke, Kit Harington, Lena Heady, Peter Dinklage, Sophie Turner and Maisie Williams into superstars. It brought high-concept serial fantasy to the mainstream audience.

Ostensibly a chronicle of how far those who seek the Iron Throne would go and the travails of the Stark family, “GOT” become so much more. It’s the story of an entire world in the place between the magical and the mundane; it’s a scroll of secrets long kept; it’s a medieval horror story; it’s a story of families and children; it’s a story of wolves, lions and dragons; and, ultimately, a girl and her sword.

Aside from some of the greatest onscreen battles in TV history, the show has given us so many powerful things: The shocking death of Ned Stark; “Valar morghulis (all men must die)”; the Red Wedding; “You know nothing, Jon Snow”; “Daenerys Stormborn of House Targaryen, rightful heir to the Iron Throne, rightful Queen of the Andals and the First Men, Protector of the Seven Kingdoms, the Mother of Dragons, the Khaleesi of the Great Grass Sea, the Unburnt, the Breaker of Chains”; the Dothraki language; and the wit of Tyrion Lannister, among many others. Just try to get that iconic opening theme by Ramin Djawadi out of your head.

On April 15 (Manila time), the final season of “GOT” begins, with six feature-length episodes instead of the usual 10 hourlong ones. The gathered forces of the living, led by Clarke’s Khaleesi Daenerys Targaryen and Harington’s King of the North Jon Snow, will defend Westeros from the approaching army of the dead, led by the Night King and the ice dragon Viserion. Headey’s Cersei Lannister is plotting her own conquest. Will the surviving Starks ever live in peace or is their reunion to be short-lived? What is to become of Jon and Daenerys, especially in the light of Jon’s true parentage? Those are questions to be answered in the six weeks, the fate of Westeros determined in six episodes.

There is a prequel series on its way and Martin has promised two more novels to round out the series. But the ending we are seeking is almost upon us. Since 2011, we were told “Winter is coming.” Winter is here and will soon be gone. All hail, “Game of Thrones.”

In the week before the premiere, Super presents a guide to the first seven seasons, with recaps, key deaths and best episodes. Prepare yourselves for the end. It starts here.

The Starks of Winterfell live an honorable and peaceful life after a bloody rebellion. But political intrigue and a death in King’s Landing leads Eddard Stark to discover a secret among the ruling Baratheon family; the three Baratheon children are products of incestuous relations between siblings Cersei and Jaime Lannister. Bran Stark is thrown from a tower and loses use of his legs after seeing what he shouldn’t have. The bastard Jon Snow begins a journey of discovery among the Night’s Watch. The Starks take up arms against King’s Landing led by Robb Stark; Ned Stark is executed. Jaime is captured.  The White Walkers prove to be more than a myth. The surviving Targaryen heir Daenerys joins the Dothraki and, with the return of creatures long lost, becomes the Mother of Dragons.

Jon Snow tries to do the right thing even as things in the Night’s Watch go awry. Daenerys continues her quest to regain the Iron Throne. Jaime loses his hand. He and Brienne of Tarth go on a trip, as do Arya and the Hound. Theon Greyjoy is tortured. Sansa Stark is a virtual hostage in King’s Landing. Daenerys ascends to the throne in Yunkai. The Starks suffer the worst possible fate at the infamous Red Wedding.

Best episode: Episode 8, “The Mountain and the Viper”

Melisandre resurrects Jon Snow. Bran continues his mystical transformation, looking into the past, including the origin of Hodor. Cersei promises vengeance on Ellaria. Sansa and Jon Snow reunite. Cersei wipes out her opposition in King’s Landing by burning down the Sept of Baelor; Tommen kills himself. Jon Snow defeats Ramsay Bolton at the Battle of the Bastards; Ramsay is killed by his own dogs. Cersei crowns herself ruler of the Seven Kingdoms. Daenerys takes her dragons and forces across the narrow sea.

Arya kills Walder and his brood at the Twins. The White Walkers’ army is coming. Samwell discovers many things at the Citadel, including Jon’s true parentage. Cersei carries out her revenge on the Sands. Sansa, Bran and Arya reunite at Winterfell. Danerys’ dragons decimate the Lannister army. Jon Snow allies himself with Daenerys, a political alliance that soon becomes romantic. Arya kills the treacherous Littlefinger. Jon Snow puts together an army of the living to combat the army of the dead. The dragon Viserion is killed and turned into a White Walker by the Night King. The army of the dead attacks Eastwatch, breaching the Wall and marches into the south.