Traffic?! No problem–zip in a chopper in ride-share scheme | Inquirer Lifestyle ❮ ❯ 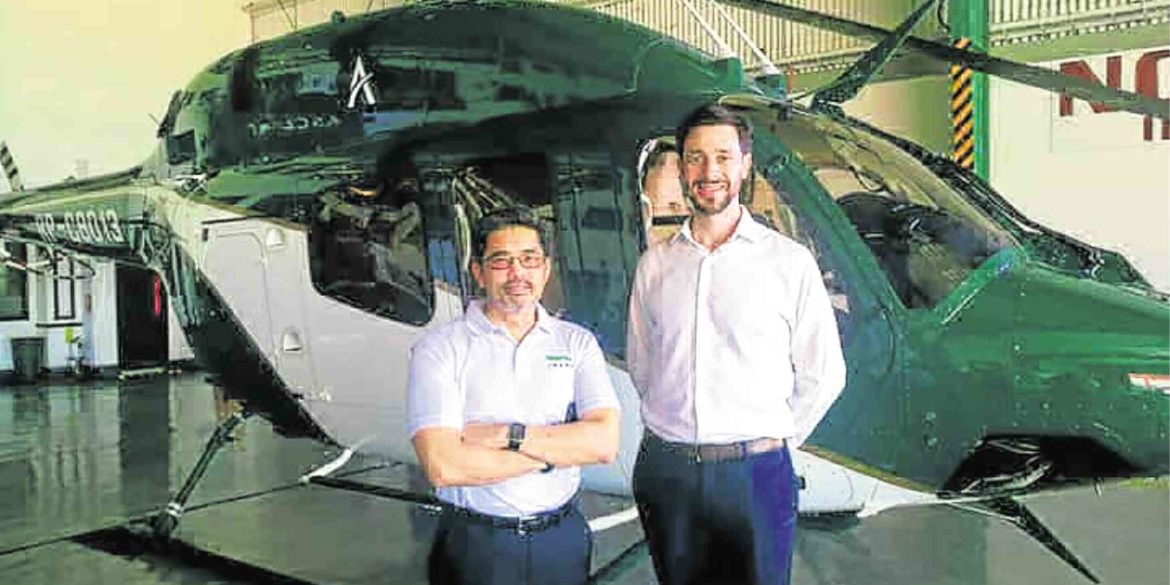 Traffic?! No problem–zip in a chopper in ride-share scheme

It’s the first in Southeast Asia, a partnership between tech startup Ascent and Lopez aviation firm

It’s called the Squirrel, says Capt. Edgar Allan Carreon, describing the French-made helicopter (AS350B2) we will hop on, with him as pilot.

Carreon, a retired Philippine Air Force officer, is one of the pilots you might also meet—if you book a flight, Grab-style, with Ascent, a new helicopter ride-sharing service that will start operations in select Philippine cities on April 8.

Seconds after takeoff, we imagine hearing Wagner’s “Ride of the Valkyries” in the chopper scene in “Apocalypse Now.” But flying from the domestic airport in Pasay to Ayala and Edsa in just a few seconds, an upbeat track, like Brubeck’s “Take Five,” is more apt.

The six-minute spin that took us on a drone-like cruise over Manila Bay, Makati, and BGC actually felt like a slo-mo amusement ride—a fun experience for people who need to zip, for instance, from Naia to Clark, or from Quezon City to Tagaytay, to skip the traffic.

Riding on a helicopter via Ascent is like chartering a flight—only it’s way cheaper. It also happens to be the first of its kind in Southeast Asia.

“There are traffic and connectivity issues between Metro Manila and the booming cities around it,” says Ascent CEO Lionel Sinai-Sinelnikoff, who adds that there’s a good number of helicopters and helipads rarely used in the metro.

But while Ascent has the software to operate its chopper platform, it needed to partner with a reliable company that will provide the hardware—helicopters and small planes.

In 1947, Feati was sold and subsequently merged with Philippine Airlines.

In 1993, Inaec Aviation Corp. was revived initially to serve the needs of the Lopez Group of Companies. In 2001, it expanded its clientele due to a demand for domestic and international air charter services.

Benjamin “Jay” Lopez, Inaec president, says the company’s services can be crucial in times of emergency or crisis. He remembers the aftermath of Supertyphoon “Yolanda” in 2013, when government and private groups needed immediate response via relief efforts.

When “Yolanda” struck, big planes couldn’t land at the Tacloban airport which was damaged. Helicopters became a necessity.

“We networked through our regional partners, and we were able to find larger helicopters to deliver relief goods to far-flung areas, not just Leyte,” says Lopez.

He adds that the Inaec hangar in Pasay became a warehouse for repacking relief goods, with lots of volunteers working long hours.

Lopez, who has been with the company for the past 12 years, says, “It’s fun growing the business with committed people working with us. Most of the pilots were from the military. Their level of professionalism, competence and familiarity with the country’s territory is beneficial.”

He points out that the company has a safety management system in place to make sure the risks of transporting people and cargo by air are addressed.

For comfort and convenience, the Inaec hangar, where most of the choppers for Ascent are parked, has a relaxed ambiance.

The Inaec website wants to highlight that Ascent’s passengers will experience “the warmth of Filipino hospitality.” “It’s like a family environment. Everybody is family. Coming into the office is like coming home,” says Lopez, who’s 49, a father of five.

He sums up the company’s mission in providing aircraft for Ascent: “What’s important to us is you fly, finish your business, and come home to your family safely.”

Sinai-Sinelnikoff says Ascent is looking to expand its services to the Visayas and Mindanao, before adding flights to Southeast Asia and rest of the world.