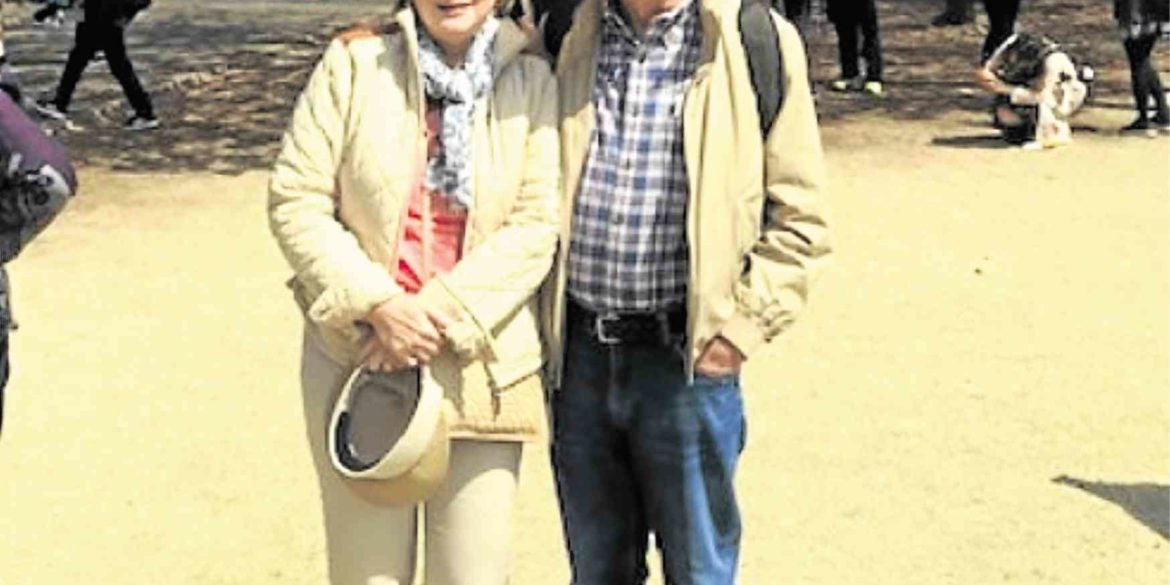 Susan and Boyer at Shinjuku Park

The elusive but inspiring ‘sakura’

Last year, we had missed the cherry blossoms—sakura—completely. We took a trip to Osaka toward the end of April, but the blossoms, we were told, were abloom where we weren’t. Luckily, Osaka had more than enough to offer to make up for unseen blossoms.

The perfect opportunity came this year. Susan and Boyer, one of the couples we had hit it off very well with as traveling companions, asked us to join them on an eight-day cruise, March 26-April 3. With six Japanese stops and a seventh in Busan, in South Korea, it definitely raised our chances to see at least one cherry blossom shower before it went “sayonara.”

The cruise itself was sold on that promise—a Cherry Blossom Cruise. There are different varieties, all fragile, and each, the literature says, blooms at no exact time and sheds after a week or two, depending on the wind and the weather.

Every year, the very considerate and efficient Japanese put out a chart for chasers like myself, indicating the best chances, at what time and in what region.

Had I checked, I would have known that the best time this year for viewing cherry blossoms in Tokyo would be between March 28 and April 7. We were too early in the month, arriving in Tokyo too late in the afternoon for daytime viewing. There were cherry blossoms at night—yazakura—in a popular park quite a way from our hotel, but, since we were two couples splitting the fare, we grabbed a cab and chanced it.

Cherry blossoms in fair bloom lined the wide paths. But the Japanese lanterns that lit the place somewhat diluted my view. In fact, the general dimness didn’t do justice to the blooms at all—not to mention, it was just too cold.

Still it was an experience, and in the company of a younger couple holding hands all the time—well, most of the time—romance seemed just a spouse’s hand away even for old fogeys. All four of us agreed, however, that the best time to fully appreciate these pinkish, delicate blooms is in broad daylight and in full sun.

The next morning, our tour group of 17 Filipino tourists headed for Shinjuku Park. It was impressive in size, but while there might have been a thousand trees in full bloom, as gorgeous as each one stood on its own, they seemed pitifully sparse in that vastness.

There would be other stops along the Japanese coast—Gamagori, Osaka, Kochi—but I began to think I might never catch sight of those elusive sakura as I imagined them. Osaka’s blooms would be best viewed between April 4 and 12. In Kochi, Vergel received a call that his colleague and friend Maria Ressa had been arrested again. As he began to write on his iPhone, I slipped away to climb, with the sole aid of a bamboo cane for tourists, one of the highest castles.

I had, of course, forgotten that what goes up must come down. I and Vergel, who hadn’t a clue where I was, were left behind by the group, but Boyer, ever the gentleman, came back for us and walked us to the group’s lunch. Later on, an Australian couple, newfound acquaintances John and Barbara, shared that spectacular blossoms had been waiting for me in the Kochi Botanical Garden!

Ashore again, after a whole day at sea, we found all the cherry blossoms I could accommodate in my dreams—of all places, outside Japan, in Busan! It sounded like baekot (listed as beojkkoch) from the cabbie’s lips, but it’s sakura all right.

The splendor of those trees had somehow gotten me to dream of having our own botanical garden, as in my grandfather’s time. There would be flame trees, exotic Palawan tulips, and the pollution absorber—yellow, pink and white calachuchi.

I somehow cannot separate flowers from fragrance, and that is precisely what’s missing in cherry blossoms. Nothing could be sweeter-smelling than sampaguita, ilang-ilang, jasmine and dama de noche! Our garden should nevertheless include the almost extinct cadena de amor, and other gorgeous vines, in particular the multicolored, easy-to-care-for bougainvillea.

While I’m at it, I might as well dream of having as many opposition candidates in government elected this May, if only to keep our officials functioning for the good of the country, for a change. Only then can we at last get down to life’s serious business of smelling the flowers to make better persons of us all.