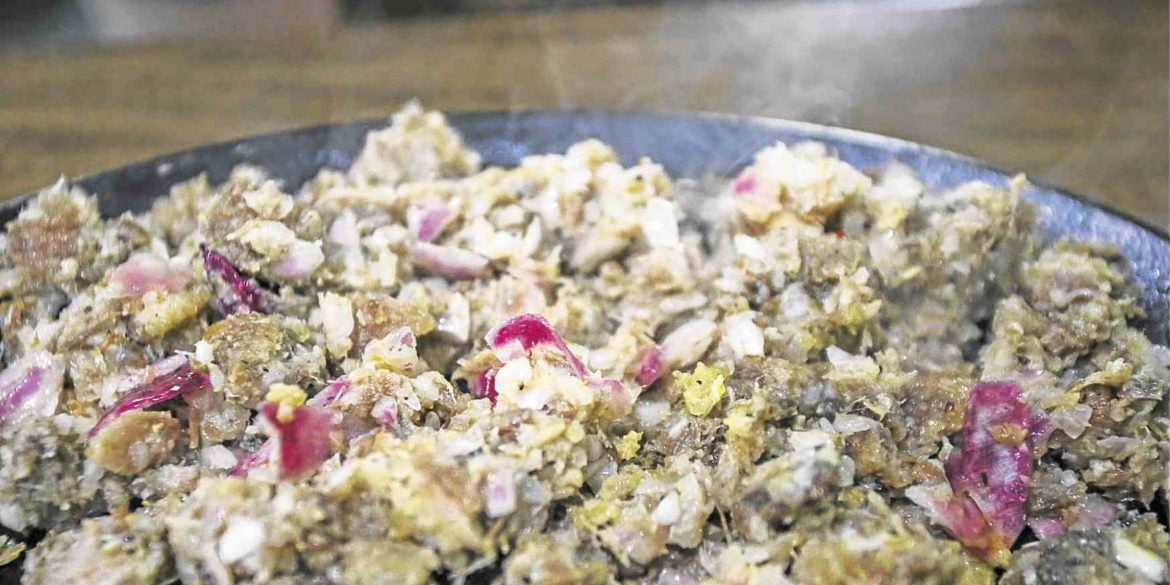 The ‘turo turo’ specialties and ‘kakanin’ that are sent abroad

This roadside carinderia is owned and run by Belen Castañeda, who started the business when Mount Pinatubo erupted in 1991. She opened her first makeshift turo-turo-style eatery at the corner of MacArthur Highway and named it Tindahan sa Kanto.

Years later, needing a bigger space for customers coming from all over Pampanga, she bought a 1,300-sqm foreclosed lot across Jesus Street. Now, she gets more diners from outside Pampanga who have heard about her best-selling sisig.

Her acclaimed pork sisig doesn’t come on a sizzling plate but on a modest white plate, filled with diced pig’s cheeks mixed with just the right amount of onions, pepper and chilli.

Castañeda wakes up at the break of dawn to go to the market and cook, to serve her early customers lugaw, dinuguan and pancit. She serves 10 to 12 dishes a day. Favorite ulam include lechon kawali, kalderetang baka, kare-kare, bistek, giniling, kilawin and corned beef.

This is probably the best time to indulge yourself in Gill’s popular buko sherbet and ice cream at Nepo Mart on Hilda Street.

Travelers from Manila seek them out for the refreshing buko lychee sherbet in little red cups that come with colorful plastic spoons. The sherbet has two sizes: 8 oz and 16 oz. Aside from buko lychee, pure buko and melon flavors are also available.

Their loyal clients swear that this homemade sherbet tastes fresher and purer in flavor than any ready-made sherbet sold commercially. If you want your sherbet more creamy and tasty, you can request a scoop of Coffee-Mate creamer.  Believe it or not, the sherbet magically tastes even better with a coffee creamer. It’s smoother and creamier.

For ice cream, cool off with  buko flavor with chunks of langka, cheese, buko and mais.

Just outside the Nepo Mart is the original store of Susie’s Cuisine, which touts itself as the “Home of Original Pampango Kakanin.” Its famous dessert, tibok-tibok, is raved about because of its richness. It’s made of pure carabao’s milk—thick yet smooth and ultra creamy.

Founded in 1972, Susie’s Cuisine is managed and operated by Jesusa and Glenn Yabut. Every day, people line up to buy  kakanin, including the cassava cake, mochi, nilupak and sapin-sapin, to name a few. They are available per slice or per bilao and can be packaged either in styro or in snack boxes.

Balikbayans bring these kakanin to different parts of the world.

Aside from the kakanin, Susie’s merienda line is popular and extensive—palabok, pancit (bihon or Canton), dinuguan, lumpiang ubod, bringhe, tamales and okoy.

Whenever a restaurant is full on a Monday afternoon, you know it must be very good. This is the case with Milagros Gomez’s 32-year-old restaurant on Andres Street, Barangay San Angelo, as it is always busy and full of diners any time of the day. On weekends, you wait in line for a table.

People from all walks of life pack the place for its Sisig Matua, the original version of sisig prepared like kilawin. It’s made from boiled pig’s head, sliced and flavored with sukang sasa, onions, salt, pepper and chilli. In the early days, Gomez says, this type of sisig was given to pregnant women because of its salty-sour taste.

Later the restaurant joined the bandwagon in serving the popular version of sisig, which is fried and crispy served on a sizzling plate. It’s made with marinated pig’s cheeks sautéed in onions, salt and pepper, and chilli.

Both kinds of sisig—sizzling and kilawin-style—are the bestsellers in the house, though its signature dish is the tokwa’t baboy, consisting of slivers of the boiled sisig, steeped in soy-vinegar sauce, mixed with ginger, onions and celery and topped with the crispy fried tokwa cubes.

This restaurant started as a  sari-sari store in front of the Gomez family home. Now, it is a must-stop in Angeles. The 87-year-old Gomez can still be seen around the restaurant mingling with diners, who always request for a snapshot with the amiable lady.

Nyaman Na Pho prides itself in having the best pho in town, ever since it opened in 2013. It’s a three-man family operation on Manuel L. Quezon Street.

Nyaman Na Pho, or “delicious pho,” is the first Vietnamese restaurant to open in Angeles.

The place is always packed with people enjoying a steaming bowl of rice noodles in beef broth, with a deep, rich flavor. Its beef pho is a standout dish, with the restaurant boasting a six-hour simmered broth made of beef brisket, beef bones and many spices.

The fried spring roll is wrapped in a piece of lettuce and basil and dipped in a special sauce with nuoc nam (Vietnamese fish sauce), while the fresh spring rolls come with a bagoong isda sauce with pineapple.

Arnel says they get the sweet pomelo  from Davao, while the rice paper and other ingredients are sourced from Vietnam.