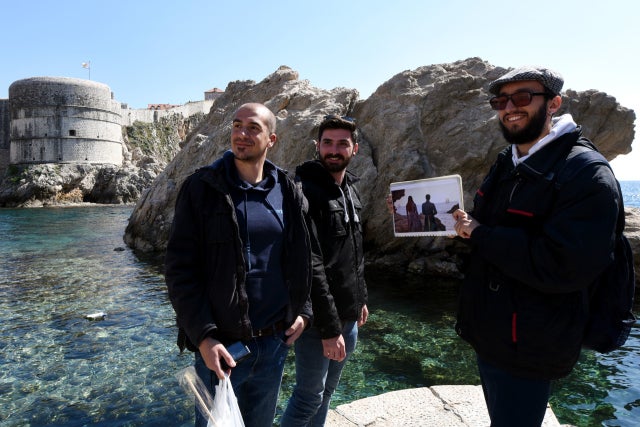 A tourist holds a picture of a "Game of Thrones" (GoT) scene to fans from Spain, on March 28, 2019, during a guided visit, under the Lovrijenac Fort, an historical symbol of the city of Dubrovnik also known for being the setting of the sea battle at Blackwater where Stannis Baratheon tried to attack Kingís Landing and dethrone King Joffrey. Image: Denis LOVROVIC / AFP

Dubrovnik or King’s Landing? Game of Thrones tourism is ‘blessing and curse’

Shepherding tourists through the arches and towers of Croatia’s medieval walled city of Dubrovnik, Ivan Vukovic spends half his time leading tours of a capital that doesn’t exist: the fictional King’s Landing from “Game of Thrones”.

The two cities now rival each other for fame after Dubrovnik — already a tourist and cruise ship magnet — became a set in 2011 for the cult HBO series, whose final season starts on April 14.

Doubling as King’s Landing, the capital of Westeros’ Seven Kingdoms, “can be a blessing and it can be a curse” for Dubrovnik, said 38-year-old guide Vukovic.

While the “Game of Thrones” stardom has been a boon for his business, it is also bringing a new inundation of visitors to a city already struggling with overcrowding.

“It’s an amazing thing because it brings us so many people, but now we don’t know what to do with those people,” said the guide, describing bottlenecks that choke the city’s limestone streets in peak summer season.

More than half of his tours include landmarks from King’s Landing, while the others focus on the genuine history of Dubrovnik, a UNESCO site that dates back to the 7th century and features a maze of churches, palaces and fountains perched above the shimmering Adriatic.

Locals no longer bat an eyelid when tourists gather along the old town’s baroque Jesuit Staircase to shout “Shame! Shame! Shame!” — a sight fans recognize as a reenactment of the GoT scene when Queen Cersei is forced to publicly walk naked down the steps after confessing to adultery.

Sitting in the terrace of his pizzeria at the foot of the stairs, owner Niko Grljevic says he doesn’t mind the GoT fans, though he would prefer guides urged tourists to refrain from stripping down for an even more authentic rendering of the walk of shame.

“We cannot spit in the plate we eat from,” says Grljevic.

The bar next to his place offers a “Mojito of Shame” cocktail, while souvenir shops on the main street offer a “Game of Thrones” bottle opener for 40 euros ($45), T-shirts for 34 euros and mugs for 20 euros.

Grljevic is a native of the city’s old town and one of its last holdouts, with most locals renting out their apartments to tourists or selling them for up to 10,000 euros per square meter.

After Dubrovnik’s debut in season two, the HBO show attracted more than 244,000 tourists — who spent some 126 million euros — to Dubrovnik between 2012 and 2015, according to the Zagreb-based Institute of Economics.

That, plus the normal influx, raised concerns of an “overtourism” crisis last year, when more than 1.2 million people descended on a city that is home to 42,000 locals.

Authorities say they are regulating the timing of cruise ships and have set up cameras in the city to monitor crowd flow.

But locals are worried about how to strike the right balance.

Gordan Prislic, a 70-year-old pensioner, admits “Game of Thrones” has had some positive effects in boosting the city’s popularity but that overcrowding remains a serious concern.

“Even the pigeons… have no place to land” in summer, he says, adding: “I’m afraid that tourism will destroy our ancient town.”

Tour guide Vukovic also remarks on how the old city has been turned into a shopping mall for tourists, whose Instagram posts often feature #KingsLanding as the second hashtag after Dubrovnik.

He starts his walks by encouraging people to drink the water from a medieval fountain.

“It’s the only free thing here,” he quips.

The guide used to wear a “Dubrovnik is much more than King’s Landing” T-shirt but now fears it might alienate some fans and earn him bad reviews online.

Winter has come for ‘GoT’ fans, as HBO launches scavenger hunt to find the six Iron Thrones