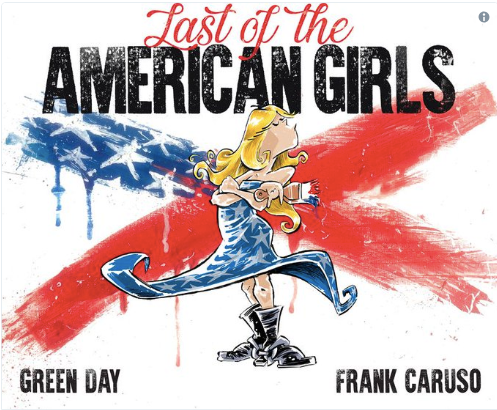 Green Day collaborated with cartoonist Frank Caruso for “Last of the American Girls”, titled after the eponymous song featured on their “21st Century Breakdown” album.

The full-color book will be released on Oct. 29 via Dey Street Books. It is described by publisher HarperCollins as “an inspiring homage and handbook for the rebellious everywoman who refuses to capitulate.”

Although no further details are available at the time, Green Day revealed the artwork for the book on Tuesday. It features a woman, presumably Gloria from the track “Last of the American Girls”, who has painted a giant “X” in the colors of the American flag.

Rebel girls unite 👊 our book w/ Frank Caruso, LAST OF THE AMERICAN GIRLS, is coming out on 10/29 💥 Pre-order your copy https://t.co/3QJd27QrLn pic.twitter.com/UlfXKRFiWj

In 2003, Green Day frontman Billie Joe Armstrong told Australian magazine Blunt that “Last of the American Girls” was originally written about his wife. “That song started out as being about my wife and then I kind of started getting into more of my own beliefs,” he said.

“Anything from a little book of conspiracies to like playing vinyl records or something. It’s sort of like about an empowering, sort of subterranean kind of lifestyle, but at the same time there’s a new era coming in with the way we all need to live — like living in a disposable society or something like that but actually living off garbage and finding beauty in it in some way.”

The project has come under fire for having an all-male team behind it, with many people posting critical comments on Twitter, while others pointing out in defense of Green Day that it is an illustrated companion to the song inspiring it.

The book “Last of the American Girls” will be Green Day’s first project since their 12th studio album “Revolution Radio”, released in 2016. Last December, Armstrong confirmed during an Instagram Live that he was writing new songs for the band.

“Last of the American Girls” will be released on Oct. 29. Fans can pre-order it on HarperCollins’ online store at www.harpercollins.com. JB