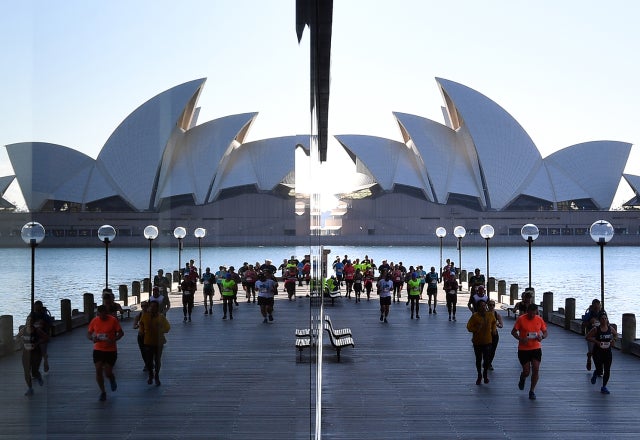 Participants of the Sydney marathon are reflect in a glass panel in front of the Opera House on September 17, 2017. More then 33,000 runners took part in four run events from Melson point to Sydney Opera House. Image: AFP/ Saeed Khan

A former French spy hailed as a genius for an engineering feat that made building the Sydney Opera House possible has died aged 97, officials said Monday.

Joe Bertony — one of the original engineers of Australia’s most recognizable building — handwrote 30,000 separate equations to create the “erection arch” or truss which held the concrete sails in place during construction.

“Those calculations were checked by the only computer in Australia at the time with a large enough capacity to do so. Not a single error was found,” she said.

“Bertony was a genius. Without him, the spectacular sails might never have become a reality.”

He died at his home in Sydney on Sunday, the Sydney Morning Herald reported.

Born on the Mediterranean island of Corsica, Bertony joined the French navy to study naval engineering and was recruited as a spy, according to author Helen Pitt, who has written a book about the Opera House.

He was twice captured by the Germans during World War II and sent to concentration camps, but escaped both times and was later awarded the Croix de Guerre by the French government for his wartime actions, Pitt added.

The Opera House, which opened in 1973, is billed as Australia’s number-one tourist destination and is the country’s busiest performing arts center. CC