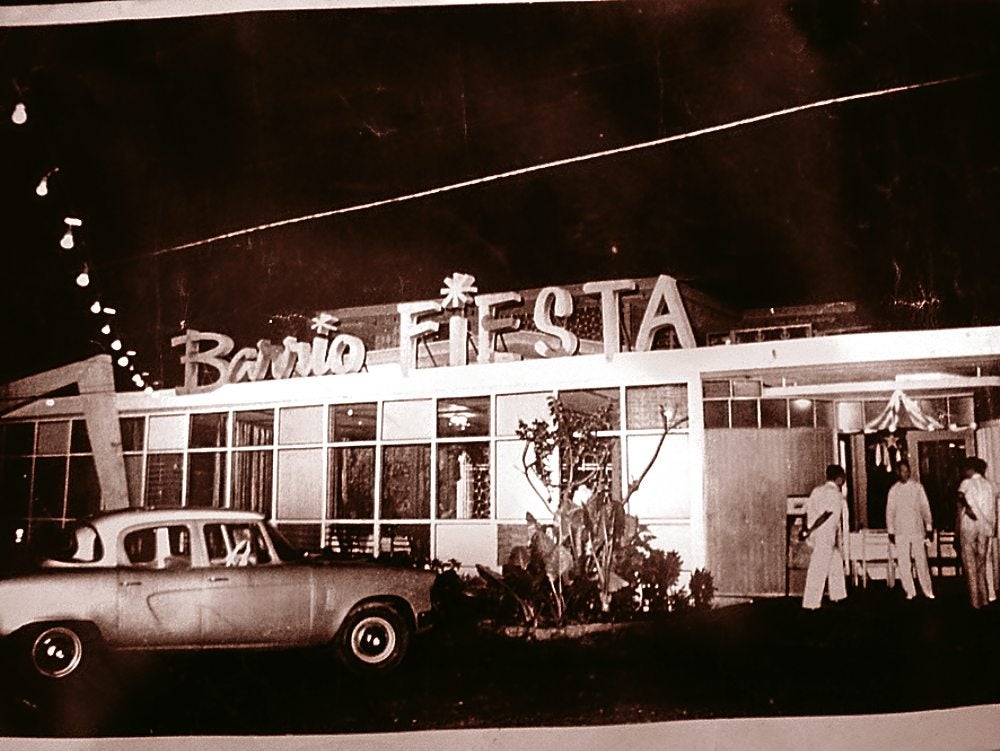 The best of Barrio Fiesta: crispy ‘pata’ and ‘kare-kare’

A billboard along Edsa—“Crispy Pata “Aming Imbento, Enjoy ang Pilipino!”— made me realize how large an impact Barrio Fiesta has made on our culinary landscape.

For the longest time, Barrio Fiesta was the place to go to for a deliciously cooked home-style Filipino meal.

In the midst of the food revolution, many of us have forgotten about the contributions of Barrio Fiesta.

But somehow, sudden unexpected bursts of nostalgia have made us crave for comfort food, which Barrio Fiesta has been giving Filipinos.

In the ’50s, Sixta Evangelista, fondly called mama Chit, catered for the production teams and the actors of Everlasting Pictures, a company owned by her husband, Bonifacio Ongpauco Sr.

Armed with what her grandchildren called a “killer recipe” for kare-kare, mama Chit opened the first Barrio Fiesta in 1958 at the Ongpauco ancestral home in Caloocan.

Alongside her kare-kare, she served other family dishes that became equally famous such as crispy pata, “rock & roll” (shrimp wrapped with ground pork, covered with crunchy tempura-like batter), adobo barrio-style and crispy chicken.

I asked Cora Ongpauco Tamayo, mama Chit’s daughter, what dish her mom was proudest of. She said Crispy Pata and Kare-Kare.

On the origins of crispy pata, I was told that it was Cora’s brother, Rod Ongpauco, who thought of the name.

It was his “sideline.” He sold deep-fried lechon legs to the restaurant.

A natural-born entrepreneur, Rod became very successful in promoting the product, says Cora. But there was a limited supply of lechon legs so mama Chit concocted a recipe this time, using raw pork legs, these pork legs are now what is known as the iconic crispy pata.

Everything tasted just as it should. But their bouillabaisse, was simply fantastic—rich yet light, tasty, malinamnam! Truly a well-executed, Filipino version of the classic. It was everyone’s favorite!

The Barrio Adobo to me remains the best—large chunks of pork and chicken, with quail eggs served in a thick brown adobo sauce that is more “gravy” like in consistency. So delicious and gladly still tastes exactly the same, as I recall it.

Their Crispy Pata still as deadly—crisp on the outside, tender, juicy, succulent on the inside.

It’s nice to know that in this fast-paced, ever-changing world of ours, there are some things that remain unchanged and that Barrio is still one of those places we can run to if we want to have a taste of what our food was like, cooked “authentically” and “originally,” as they did when they first opened their doors in 1958.

According to the Ongpaucos, when you go to Barrio Fiesta, it’s not only for the food. It is also because it brings back memories. For after all, who hasn’t celebrated an occasion be it a birthday or a graduation at Barrio Fiesta?

Add crab, mussels, clams and shrimps and simmer until cooked and still tender.

I’d like to thank Mark Tamayo for all his help with this article. (Call Barrio Fiesta EDSA at 7267836.)

1 tbsp each fish and soy sauce

Combine everything in a bowl and mix. Marinate in refrigerator for four hours, preferably overnight

Oil baking sheet. Put 2 c of the meat mixture and spread. Put plastic wrap over meat and with a rolling pin, roll as thinly as possible.

Put in a 175ºF oven to dry for 15 minutes or until firm to the touch.   Remove from the oven and cut into pieces.

My book “Kitchen Rescue 3, The Directory—My Lifeline to Eating, Cooking and Living” is now available at all leading bookstores. (Call 6474744).