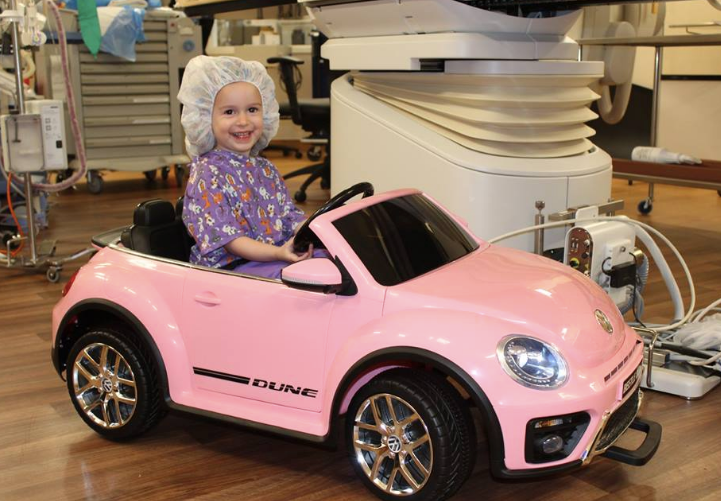 For some kids, having surgery may just be the scariest thing, but one hospital in California, United States has come up with a way to help ease stress and anxiety one less nervous child at a time.

The Doctors Medical Center in Modesto are letting their young patients drive into surgery with mini cars — a miniature pink Volkswagen Beetle and a black Mercedes, to be exact. As per People on April 5, giving the kids mini cars to drive to the operating room helps in reducing their anxiety for the surgery.

“These sweet rides take our smallest patients to the operating room,” the hospital said in the report. “The goal is to reduce anxiety and stress, and make the experience less scary for everyone involved.”

It was pre-op nurse Kimberly Martinez who thought of the idea, as per report. The method has since been a success, as many of the young patients light up when they find out they get to ride the mini car.

“In most cases, their fears melt away,” the hospital stated. “In addition, when parents see their children put at ease, it puts them at ease as well.”

The mini cars are equipped with cool features, such as a stereo with pre-loaded music and an MP3 player that the kids can operate. They also come with working headlights, back-up and dashboard lights.

A young girl named Caroline was shown riding the pink Beetle in a video posted by the hospital on Facebook last March 24. Caroline can be seen happily driving the mini car down the hall wearing her hospital scrubs and head cover.

With a little passenger in tow, Caroline takes our new pink Beetle for a spin! Doctors Medical Center now has two little cars available for our young surgical patients to ride into the operating room. We can see the stress and anxiety melt away when they hop in the car ❤

“With a little passenger in tow, Caroline takes our new pink Beetle for a spin!” the hospital stated. “Doctors Medical Center now has two little cars available for our young surgical patients to ride into the operating room. We can see the stress and anxiety melt away when they hop in the car.”

Mini cars have been used by some hospitals in the United States, France and Australia to help ease children’s anxieties and fears about surgery. Last 2018, a public hospital in northern French city Valenciennes introduced a small electric sports car to its young patients which has helped wipe out the need for administering anti-anxiety medication. Cody Cepeda/JB