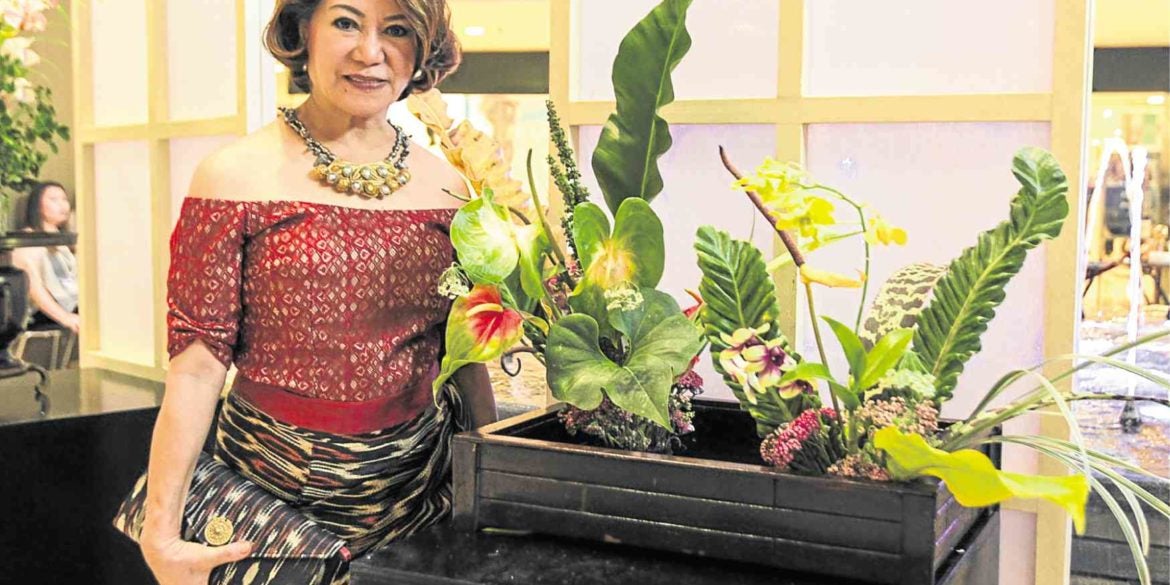 Joyce Kato with her Ohara ikebana (above and right).

‘It’s a way of life, a prayer of thanksgiving’ 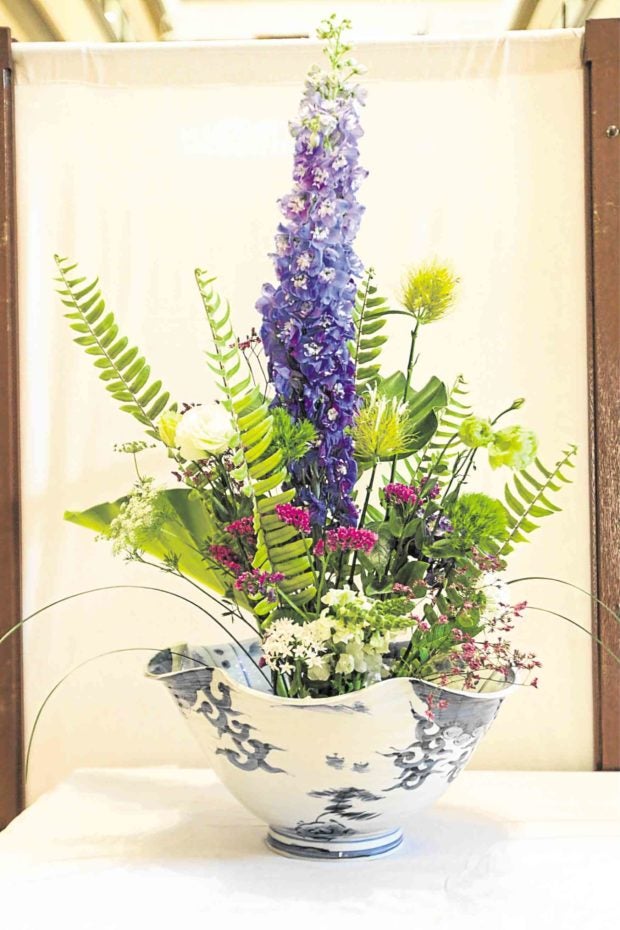 Marc Tomas, a civil engineer, wasn’t into plants or the arts. After years as an anesthesiologist, Romeo Balderrama shifted to medical acupuncture and the export of abaca vases. Homemaker Joyce Kato was looking for an activity to fill her days as wife and mother of two.

A mutual passion for ikebana brought Tomas, Balderrama, Kato and other followers of Japan’s centuries-old art of flower arrangement together during the 52nd anniversary celebration of Ikebana International Manila Chapter 108 at Shangri-La Plaza recently.

Chartered in the II’s Tokyo headquarters on March 9, 1967, Ikebana International Manila (the 108th chapter of the organization) has 75 active members, each one working to stimulate, cultivate and perpetuate the study of ikebana and related arts, as well as foster friendship through flowers.

How an ancient craft, originally meant as an offering in religious temples, continues to draw men and women of diverse backgrounds today speaks volumes of ikebana’s versatility. Over a thousand styles exist, from the classical to the contemporary, inviting individuals to embrace the ones that appeal to their unique personality and aesthetic.

Surprisingly, a talent in floral arrangement, much less an interest in flowers, isn’t a requirement. “I thought it was bonsai,” admits Tomas of his earliest understanding of ikebana. “As civil engineer, I wasn’t into plants and didn’t know the names of flowers. I was more into lines, shapes and colors.”

That was all he needed when he studied under a Japanese teacher in 2002. Nearly two decades later, Tomas, president of Ikebana International Manila Chapter 108, is a teacher himself of Sogestu, an avant-garde school of ikebana. Besides observing the rule that arrangements must have three distinct and strategically placed elements to establish hierarchy and proportion, Sogetsu encourages the use of unconventional materials.

“It allows me to express my thoughts and feelings. The more I stay with it, the more I discover things about myself and my style,” he says.

That style is a dynamic and adventurous one. Working on the event’s theme, Filipiniana, he created a large-scale, almost sculptural arrangement of black and natural-colored bamboo poles, round woven fruit trays in red, pops of yellow wild grass picked from his trail run in Tanay, and black-painted branches from chico trees. Encircled with an undulating strip of bamboo, the setup was inspired by the panubok embroidery of Panay-Bukidnon women.

The ikebana artist has also become more aware of his surroundings, and likes incorporating recycled and found objects into his work. Think a discarded electrical post or countless plastic seals from mineral water bottles.

“That’s what I thought,” he says of the general impression that ikebana creations are meant to be small and spare in design. “If that was the case, I don’t think I would have lasted this long!”

Relaxed and energized is how Dr. Balderrama feels each time he practices Ikenobo, the oldest form of ikebana dating back more than 550 years. “It’s the origin of ikebana, actually,” he says.

While traditional and structured in its approach (an arrangement is considered visually balanced and harmonious when it features Ikenobo’s nine parts, each one reflecting the characteristic of a plant or flower), it has also evolved with the times, spawning styles that advocate self-expression and the freestyle placement of flowers and leaves.

Ikenobo comes naturally to Dr. Balderrama. Arranging flowers and plants since high school, he was in the medical field for many years, and then left it for the export business of abaca vases. To use his vases, he studied Ikenobo under renowned professor and plant expert Serapion Metilla.

Now a teacher himself, he is clearly in his element as he explains the symmetry of his tall and exquisite landscape-
inspired creation on a trophy-like vase, as well as the right way to appreciate it (always from the center and looking from the base upward). 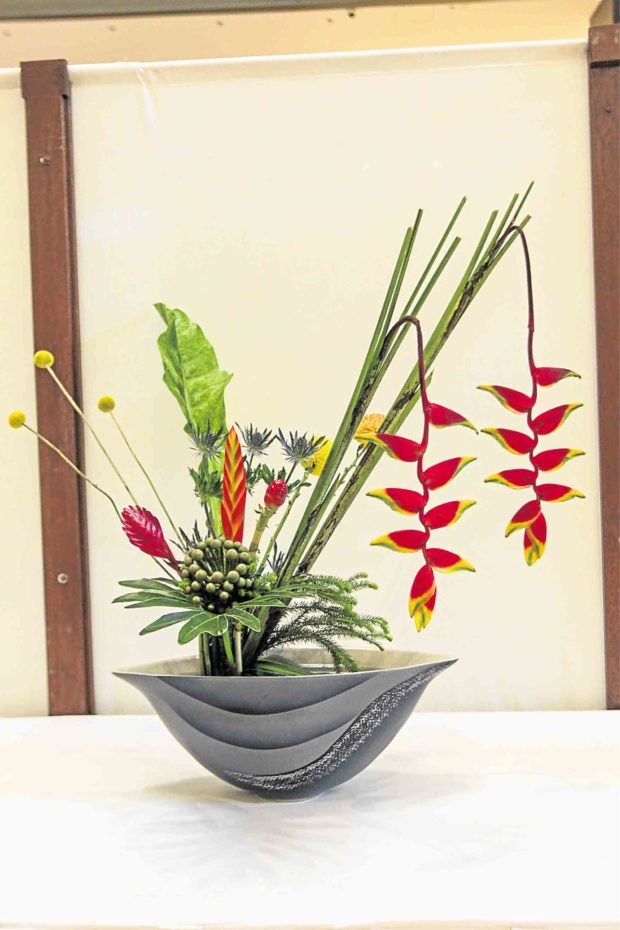 “Every ikebana artist should learn Ikenobo,” says Dr. Balderrama, a member of the Ikenobo Ikebana Society of Manila Chapter 67. “Once you get the basics, you can try other styles.”

“It’s a way of life, a prayer of thanksgiving,” he adds of art’s effect on his life. “It relaxes you, elevates your confidence, and beautifies a home.”

Ikebana has an antiaging effect on Kato. Practicing the craft for nearly five decades now, she exudes a youthful glow and disposition that belie her 70 years.

Married to a Japanese national and now with an adult daughter and son, the former English teacher immersed herself in Japan’s culture and arts as a young Filipino homemaker living in her adoptive country in the early ’70s. When she returned to the Philippines in the mid-1990s, she joined Ikebana International Manila Chapter 108 and taught its various styles.

Of the different schools she has mastered, she favors Ikenobo, for its strict adherence to rules, and Ohara, which requires practitioners to capture, in a bowl or vase, how plants and flowers appear in their natural environment. Advocates of Ohara refer to what they do as landscape arrangement.

Her creation, a burst of bright blooms and leaves that complements the color of the tall vase from Lalique, one of the event’s partners, illustrates Ohara’s nageire (or “thrown in”) principle. “It’s like bringing nature into your home,” she says. “That’s why I love it.”

As perhaps the only Ohara teacher in the Philippines today (others have passed away or moved back to Japan), Kato is hoping people consider this uplifting style. “I’d like to influence others to love nature. This is my small contribution to the environment.”