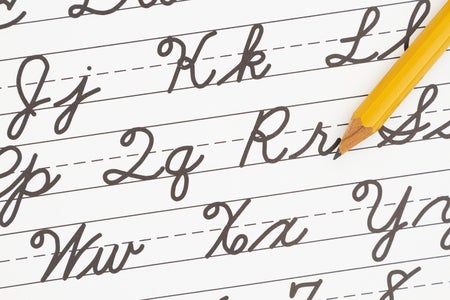 Cursive writing makes comeback in curriculum of US schools

Cursive handwriting is making a comeback in some schools across the United States, and will be taught to kids starting in the 2nd grade.

The Prescott Governing Board in Arizona, for example, recently approved a new elementary curriculum that will introduce cursive handwriting to students of the Prescott Unified School District, as per The Daily Courier on April 4.

The new curriculum, called “Handwriting Heroes” for K-2” and “Scholastic Cursive Writing Made Easy” for grades 2 to 5, aims to assist students in the development of their fine motor skills.

The Austin Independent School District in Texas will also start teaching cursive writing to its students starting school year 2019-2020 , as per KXAN on April 5.

The change in the curriculum came after updates were made to the Texas Essential Knowledge and Skills (TEKS) for language arts. Students are expected to know how to write legibly in cursive by 5th grade, while younger students will start learning handwriting in 2nd grade.

Despite the comeback of cursive handwriting in schools, there are some that did not do away with the classes. The Manor Independent School District in Manor, Texas, for one, has continued to teach cursive classes to its students with dyslexia.

Writing in cursive, according to Manor ISD’s dyslexia coordinator, apparently helps in stimulating brain function and memory. It also helps the student focus on whole words instead of individual letters, as per the report.

“Say they wanted to write the word ‘magenta,’ and they weren’t able to get it,” Tori Linzenmeyer was quoted as saying. “They might just write ‘red.’ And cursive helps them have a flow of ideas; it’s more streamlined, with less stopping in between.”

Linzenmeyer also believes there should be a balance between handwriting and typing, and said, “Strong writers become strong readers.” Cody Cepeda /ra