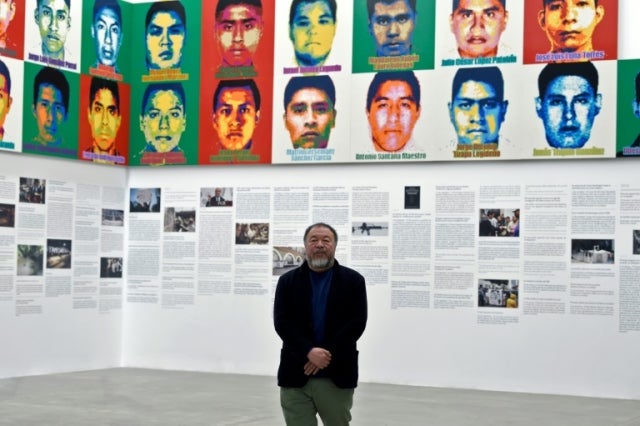 Chinese artist Ai Weiwei unveiled a series of portraits Thursday made with around one million Lego blocks, depicting 43 Mexican students who were abducted and apparently massacred in 2014.

The dissident artist, who was detained by China’s communist government in 2011, said he made the piece as a commentary on the students’ case, an unsolved crime that triggered an international outcry and continues to haunt Mexico.

“Forget about being an artist, I am a human being, just like you, and if you hear someone being hurt, you hear that your neighbors’ boy can’t ever come back, and four years pass and the government cannot come to a conclusion, what kind of government is that? What kind of society we are living in?” he said in Mexico City.

The work, entitled “Reestablecer memorias”, or “Reestablishing Memories”, is part of Ai’s new show at the University Museum of Contemporary Art in the Mexican capital.

The multicolored, pop-art portraits are displayed above a timeline that chronicles the case of the missing students.

The timeline starts on September 26, 2014, the night the student protesters — who were enrolled at the Ayotzinapa Rural Teachers’ College, in the southern state of Guerrero — were attacked by corrupt police in the nearby city of Iguala.

It then jumps to January 27, 2015, the day the chief prosecutor in the case presented the authorities’ version of events, saying the students had been handed over to drug-gang hitmen, who killed them and incinerated their bodies at a garbage dump.

Then it turns to September 6, 2015, the day a team of independent international experts who had studied the supposed crime scene said that the official version of events was impossible.

The experts, who were sent by the Inter-American Commission on Human Rights, urged the Mexican authorities to reopen the investigation. But the government at the time said it considered the case closed, and did not renew the experts’ mandate.

Ai, 63, said he saw Legos as a “democratic” medium for the piece.

“Everybody can use it, everybody recognizes it, and you can reconstruct it. It is such an efficient way, and I just love the pixel feeling,” he said. CC