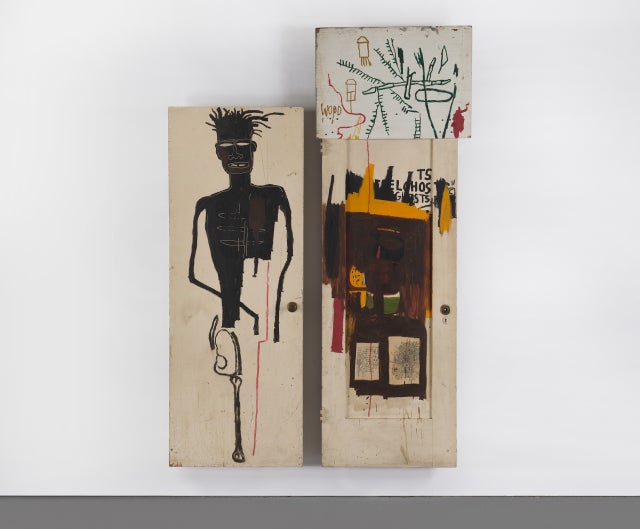 The six artworks were part of the private art collection of late hip-hop producer and co-founder of label Delicious Vinyl, Matt Dike. He never loaned them for exhibition, nor considered parting with them during his lifetime.

Auction house Phillips announced this week that two works from the collection will be offered in its New York Evening Sale of 20th Century & Contemporary Art, on May 16. Four of Basquiat’s artworks on paper will also be auctioned on May 15.

Leading the forthcoming sale is Basquiat’s “Self-Portrait”, estimated between $9-12 million. The portrait was executed on two reclaimed doors, with one depicting the artist himself while the other features a compendium of imagery and text. The creation of “Self-Portrait” was captured on film by Basquiat’s close friend, Tamra Davis, who made the footage public in her 2010 documentary “The Radiant”.

“‘Self-Portrait’ firmly takes a prime position in the pantheon of self-portraits in Basquiat’s oeuvre, one that perhaps like none other is filled with self-reflection,” said Phillips in a statement. It is one of the most significant self-portraits of the artist offered at auction in 20 years.

“This selection of works includes the largest and most complex of the ground-breaking silhouette self-portraits Jean-Michel painted between 1982 and 1985. Showcasing the extraordinary legacy of Matt Dike, these works offer long overdue insights into the valued role he played in Basquiat’s life,” explained Phillips’ head of 20th Century & Contemporary Art, New York, Scott Nussbaum.

Matt Dike, who passed away in 2018, first met Jean-Michel Basquiat in the late 1970s at a party at New York University — when the artist still went by the pseudonym SAMO. The DJ eventually became Basquiat’s assistant in 1982, when he was working for the Gagosian Gallery in Los Angeles during the day. It was during his stay in LA that the artist painted “Self-Portrait”.

Prior to the auctions on May 15 and 16, the artworks will be on view at Phillips’ headquarters in New York from May 3 to 15. Additional information about the sales are available on the auction house’s website. CC