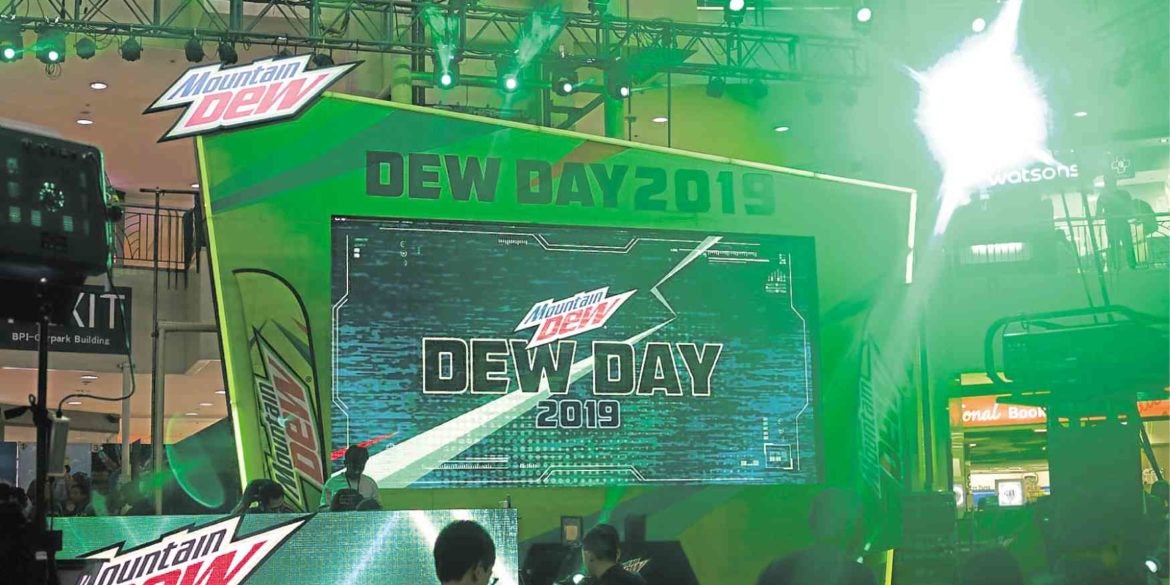 Moments before the start of the event

James Reid vs Nadine lustre in Tekken—guess who won?

E-gamers and outdoor adventurers alike recently trooped to the Market! Market! Activity Center in BGC, Taguig, for a day full of thrills at the first #DewDay by Mountain Dew.

Forging a partnership with Road to SEA Games and Mineski Gaming Café, organizers of #DewDay converted an indoor mall space into an arena jam-packed with real and virtual activities, a celebration of e-sports being a medal event at the 2019 Southeast Asian Games  this November.

Hundreds joined the fun, as the event kicked off with live matches played by the always game AkoSi Dogie, Wil Dasovich, and Alodia and Ashley Gosiengfiao.

Mountain Dew made sure that pros weren’t the only ones enjoying the games firsthand as attendees got to play virtual and real games, too.

Those who were feeling extra bold tried the wall-climbing zone complete with augmented reality for a truly immersive experience.

Others challenged their buddies at the Tekken Free Play Zone, which included several PlayStation 4s, and at the Nintendo Switch mini games zone.

Mountain Dew kept the crowd refreshed with its citrus-flavored soda.

The event wasn’t complete without Mountain Dew’s ambassador, celebrity James Reid, who handily won against Bret Jackson in Tekken, but lost in an intense game against his girlfriend and colleague, Nadine Lustre.

A self-confessed gamer, Reid is also an outdoor enthusiast. “It’s just who I am as a person,” he said of his active lifestyle.

Like most kids, he got his first taste of outdoor activities by learning how to ride a bike. Now he’s into hiking, surfing and riding ATVs across sand dunes, including his favorite in Paoay, Ilocos Norte.

As for E-sports, he started playing them when he was young, and counts Tekken as his favorite. “It’s blowing up,” he said about the format’s growing popularity. “It’s the world we live in now, it’s nice to be a part of it.”

To encourage fans to get their thrills either through E-sports or the great outdoors, he said: “Bring friends. You are defined by the people you surround yourself with, so find people who are also active.” —CONTRIBUTED