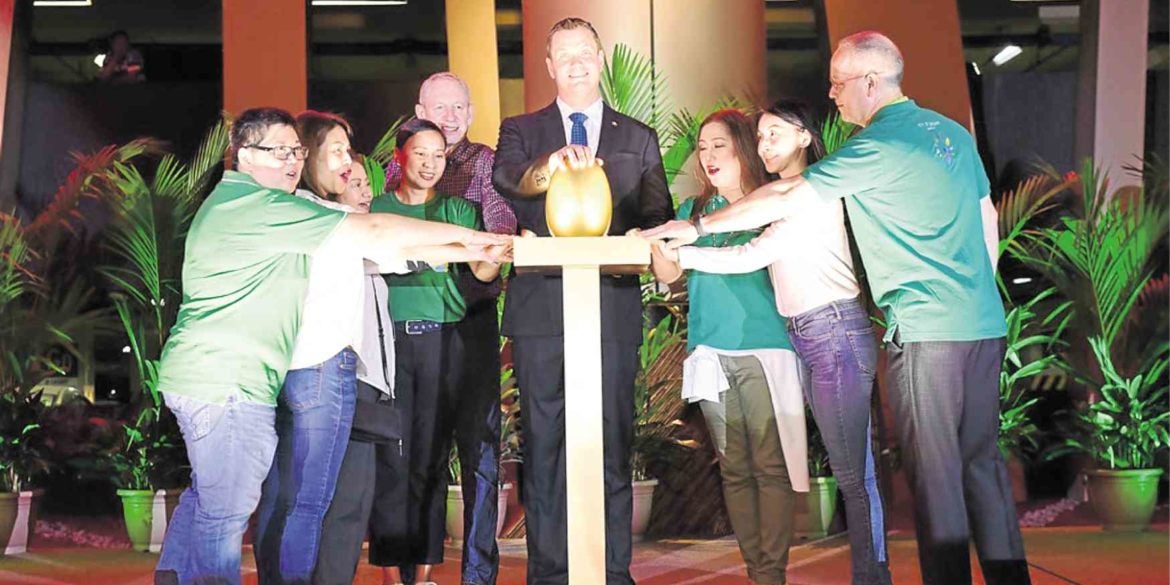 A festive air marked City of Dreams (COD) Manila’s observance of Earth Hour 2019 on March 30. We joined 200 volunteers representing the resort and casino complex’s 5,000 employees, along with a group from ABS-CBN’s Lingkod Kapamilya, in a program that symbolized COD’s commitment to long-term environmental protection and a sustainable future through eco-efficient operations.

The program began with the employees doing a short “Walk to Save the Earth” in front of the COD entrance, followed by a ceremonial switch-off of lights from 8:30 to 9:30 p.m.—simultaneously with other countries.

Three dance numbers each featured COD staff and officers, including a couple of guys doing a fire-spewing act.

COD encouraged its guests to join Earth Hour by turning off the lights in their rooms, or having dinner over candlelights at Nobu Manila, Crystal Dragon and The Tasting Room.

An initiative of the World Wide Fund (WWF), Earth Hour debuted as a symbolic lights-out event in Sydney in 2007. In 2018, Earthhour.org recorded 188 countries and territories who have joined Earth Hour.

Other COD eco-friendly initiatives include a vermicomposting facility and greenhouse nursery on the property; a holistic and sustainable coffee program; the use of biodegradable and compostable plates, utensils and takeout bags at The Garage VR Zone and food park; an employee volunteerism program that also covers coastal clean-up drives along Manila Bay; and mangrove and tree planting activities in Laguna and Cavite.

That night also marked our first time to stay at COD’s Nobu Hotel, one of the most relaxing times we’ve had in recent years. Probably the minimalist Japanese design of the room and the comfy pillows helped induce a calming effect when we went to bed.

We had such a good sleep—waking up at 10 a.m., skipping breakfast, and having a leisurely lunch with family at 2 p.m. at The Garage food park. The ramen at Hokkaido Ramen Santouka burst with thick miso tastiness, the tonkatsu set at Katsu Sora was filling, and the burger at Pink’s was dripping with delectable juiciness.

Afterward, we managed to spend another hour watching our son play at the VR Zone near the entrance to The Garage. He had a great time in the virtual driving challenge at Mario Kart, as well as eliminating hostile enemies at the VR Swarm Shooting Galaga Fever.

The Garage’s food park also has a bar that serves draft San Miguel Pilsen and Light, along with a variety of drinks. Happy-hour live gigs start at 4 p.m.