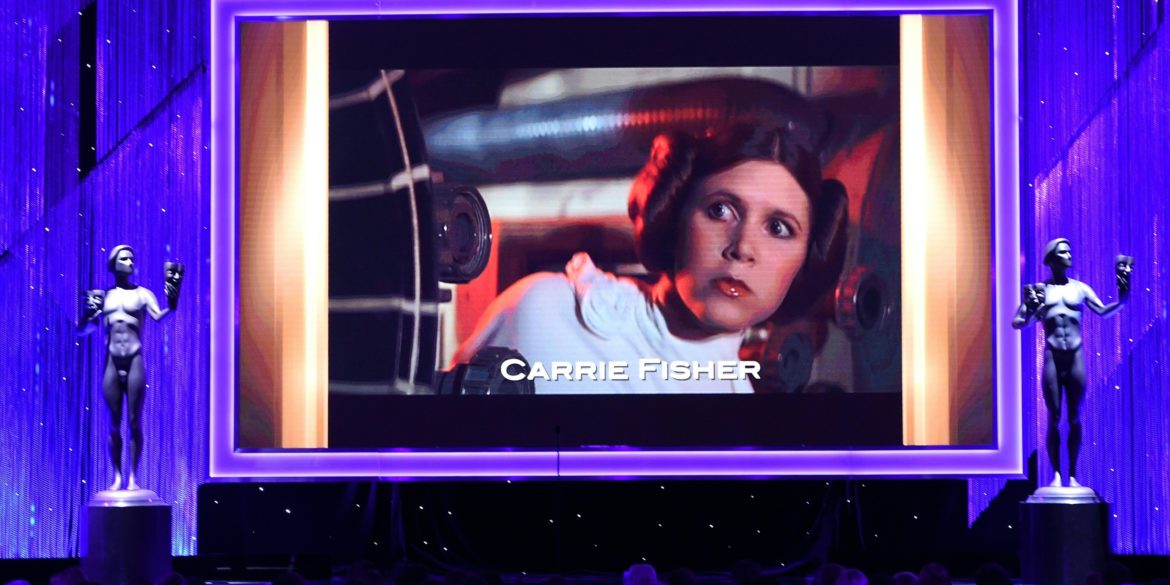 (FILES) In this file photo taken on January 29, 2017, actress Carrie Fisher is seen on a screen during the In Memoriam of the 23rd Annual Screen Actors Guild Awards show at The Shrine Auditorium in Los Angeles, California. - The late actress Carrie Fisher, who played Princess Leia in Star Wars films, will appear posthumously in the final installment of the latest trilogy in the series, the film's director JJ Abrams revealed Friday, April 12, 2019. The name of the last episode in the 42-year-old Skywalker saga was also revealed -- "The Rise of Skywalker" -- along with a first look at a teaser trailer for the highly-anticipated film. (Photo by Robyn BECK / AFP)

By: Nova Safo via AFP

Lucasfilm delighted “Star Wars” fans Friday with a glimpse of Carrie Fisher in sneak-peek footage of the hotly-anticipated final episode of the space opera — more than two years after her death.

“Every day it hits me that she is not here but it’s so surreal because we’re working with her still… she’s in scenes,” Abrams told the rapt crowd at the five-day event in Chicago.

A world-first trailer released at the convention — and dropped on the internet — reintroduced the “next generation” characters from the final three films alongside old favorites from as far back as the 1977 original, “Star Wars IV: A New Hope.”

They included Lando Calrissian, portrayed by the original actor Billy Dee Williams, and the voice only of Mark Hamill — Luke Skywalker himself — who appeared to die in the last film but was widely expected to have some role in the latest movie.

“No one’s ever really gone,” Skywalker says in voiceover, as Leia hugs apprentice Jedi Rey, played by English actress Daisy Ridley, who has top billing in the latest of the three trilogies that makes up the long-running saga.

Abrams said it would not continue the story exactly where the last one — 2017’s “Star Wars: Episode VIII – The Last Jedi” — left off.

Leia was still alive at the end of 2017’s “The Last Jedi” but the actress herself died a year earlier, in December 2016.

Disney said last year Fisher’s role would be gleaned from previously unreleased footage from “The Force Awakens,” with the blessing of her daughter, Billie Lourd.

Abrams described the “weird miracle” of being able to continue Leia’s story by looking at old footage.

Speaking at a panel discussion moderated by comedian and late night television host Stephen Colbert, the director said the film was in post-production.

It is not the first time Fisher’s likeness has featured in a “Star Wars” movie despite being absent from its filming.

“Rogue One,” a 2016 spin-off from the main series, directed by Gareth Edwards, had been in theaters for a couple of weeks when Fisher’s death from a heart attack was announced.

A much younger version of Fisher as Leia appears in that movie, thanks to the controversial application of computer wizardry to animate her image.

Naomi Ackie as a character called Jannah and Richard E. Grant are among the new faces, while old “Star Wars” hand Anthony Daniels returns as C-3PO and Ian McDiarmid reappears as the dastardly Emperor Palpatine.