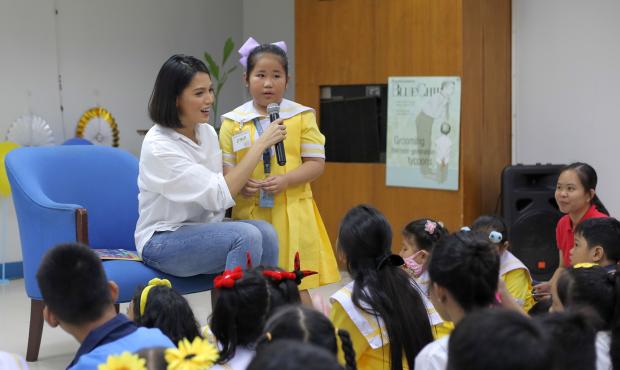 MANILA, Philipines — Your greatest enemy is yourself.

This was one of the lessons from one of the stories read to some 40 students at the Inquirer Read-Along at the Philippine Daily Inquirer office in Makati on Saturday morning in time for the Holy Week celebration.

The story tells of a female crow who thinks she can win a contest if she can turn as white as the herons. But she eventually learns that she needs only to accept herself to achieve her goals.

“Never compare yourself with anyone else. Just focus on yourself and be grateful with what you have,” Tumulak said about the story.

Tumulak, who plans to become a teacher someday and put up her own preschool, said that with the rampant social media use among kids today, it is important to go back to basics and read the printed word.

The Miss Philippines Fire 2009 has a passion project called Push to Read Project, which started in January 2018.

“During one of my tapings, I thought about having an outlet where I can use my teaching skills while I am still not able to commit to being a full-time teacher. That was how Push to Read Project was born,” Tumulak said.

Tumulak ties up with barangay captains and mayors, who will gather kids, and allows an hour of her day to teach children. She has so far held teaching sessions in Quezon City, Manila, Caloocan, and Bacolod.

The session was hosted by Inquirer researcher Rafael Antonio.

Inquirer Read-Along is a corporate sustainability and responsibility program of the Philippine Daily Inquirer that promotes love for reading among children.

Started in May 2007, the project has been held in at least 50 cities nationwide and has reached more than 20,000 children.