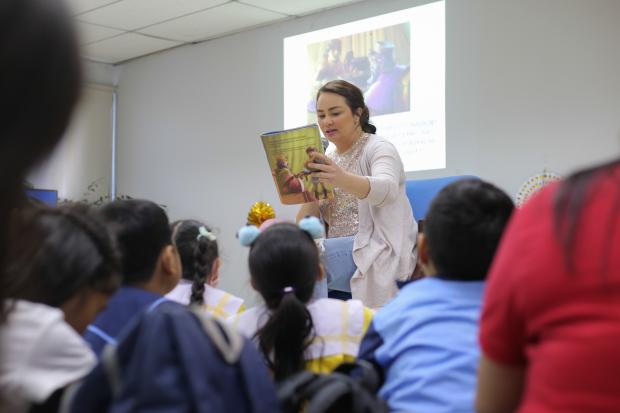 MANILA, Philippines — Tales of courage, faith, and acceptance took center stage at the Inquirer Read-Along session held Saturday at the Philippine Daily Inquirer office in Makati, in time for the Holy Week celebration.

TV host and actress Donita Rose read to some 42 kids “Si David at Si Goliath,” as retold by Boots S.A. Pastor. The biblical story tells of how a boy named David took on the giant soldier, Goliath, with the help of his faith in God and in himself.

Rose, a Born-Again Christian who grew up reading the Bible every day, said that the children should use the Bible as an inspiration in their life.

“In such a chaotic world, people need to be constantly reminded that we have a God that loves us, regardless of our shortcomings. And that we can run to him in the middle of our hardships,” Rose, one of the hosts of the TV Christian program “The 700 Club Asia,” said.

A daughter of an educator, Rose said it’s important to continue to read and to learn. She herself plans to go back to school and finish college.

“For some, reading comes natural, for some, it’s a chore. But in this day and age, we have all the resources — audiobooks, YouTube. You can learn anything that you want at the touch of a button,” Rose said.

Now on its 12th year, Inquirer Read-Along is a corporate sustainability and responsibility program of the Philippine Daily Inquirer that promotes love for reading among children.

Started in May 2007, the project has been held in at least 50 cities nationwide and has reached more than 20,000 children.